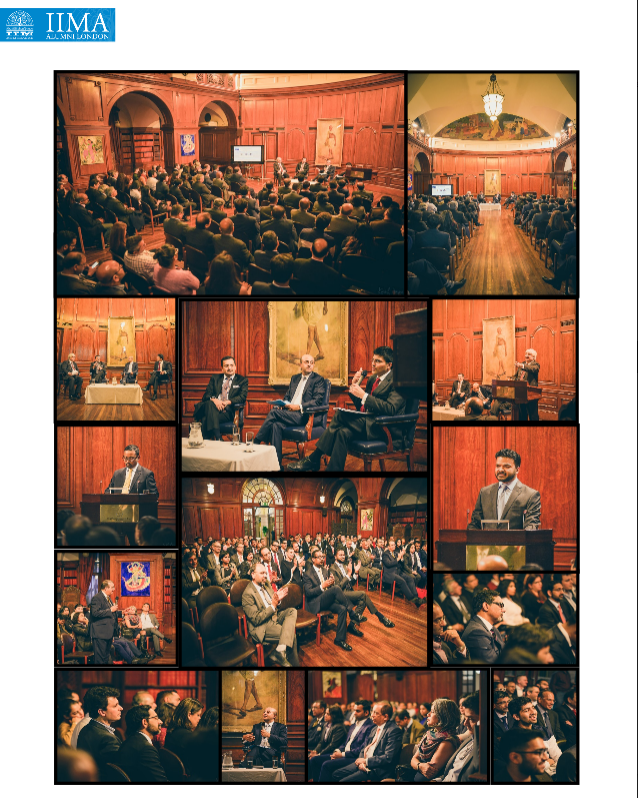 IIMA Alumni London events have found themselves becoming a forward indicator of possibly seismic global events. On the 21st of June 2016 we organized a Fireside Chat with the former special advisor to the Prime Minister David Cameron, Rohan Silva. 2 days later Britain voted for Brexit. On the 7th of November 2016, we held a half-day event titled ‘The Age of Disruption’. On the previous midnight demonetization rocked India, and the following day, the US voted in President Trump. Of course, this is pure chance. But, nevertheless, we’ve found ourselves looking at the days following our events with a keen eye.

On the 23rd of January 2018, as Prime Minister Modi gave the Opening Address at the World Economic Forum in Davos, the IIMA Alumni London Chapter organized a panel discussion titled ‘Brexit Britain and India: Challenges and Opportunities’ in association with the High Commission of India and the Indian Professionals Forum, UK. The distinguished panel consisted of Ambassador Dinesh Patnaik, Deputy High Commissioner of India to the UK, Lord Jitesh Gadhia, Conservative Peer in the House of Lords and Nikhil Rathi, CEO of London Stock Exchange. The panel was moderated by Dr Mohan Kaul, Founder Chairman of the Indian Professionals Forum, and former Dean of IIM-A.

Brexit’s role cannot be lost in crafting of the theme at Davos this year – which was ‘Creating a Shared Future in a Fractured World’. As Britain prepares to depart the EU, it has made no secret that its relationship with India will be a very important one. India was the first non-EU country Prime Minister May visited. Focusing its efforts on a trade deal with the largest Commonwealth country seems but like common sense. Bilateral Trade between the two countries is over GBP 16bn. UK is the largest G20 investor in India. Over 800 Indian companies collectively have revenues of just under GBP 50bn, with over 110,000 employees, per a Grant Thornton and CII report. Yet, much of the Brexit vote was inspired by a rejection of immigration. India wants immigration to be freer – for students and professionals. India – though the fastest growing major country in the world, still has over 220 million living under the poverty line. Its Make in India program is designed to attract foreign investment and technical expertise.

The panel discussed the topic with surprising candour and gave a view of the discussions that don’t make it to the media. All the panellists shared the view that no one knows what Brexit exactly means. In the aftermath of Brexit, India has found itself in a very fortunate position – with both the UK and EU27 finding themselves rushing to brace India and accelerate a free-trade deal, blaming past sluggishness on the other. Nikhil advised that attractiveness of the financial markets in London will subsist through Brexit with the much celebrated ‘Masala Bonds’ gaining favour. Lord Gadhia found himself needing to explain the performance and behaviour of the British government, but also deftly handled queries on immigration and student visas.

The 120-strong crowd which filled the heavily secure and historic India House was delighted by the quality of the event, the candour of the panellists and of course, the networking over the drinks and delicious canapés later.

If you are an alumnus who wants to be involved in the chapter’s activities, write in to us at iimalondonboard@gmail.com.