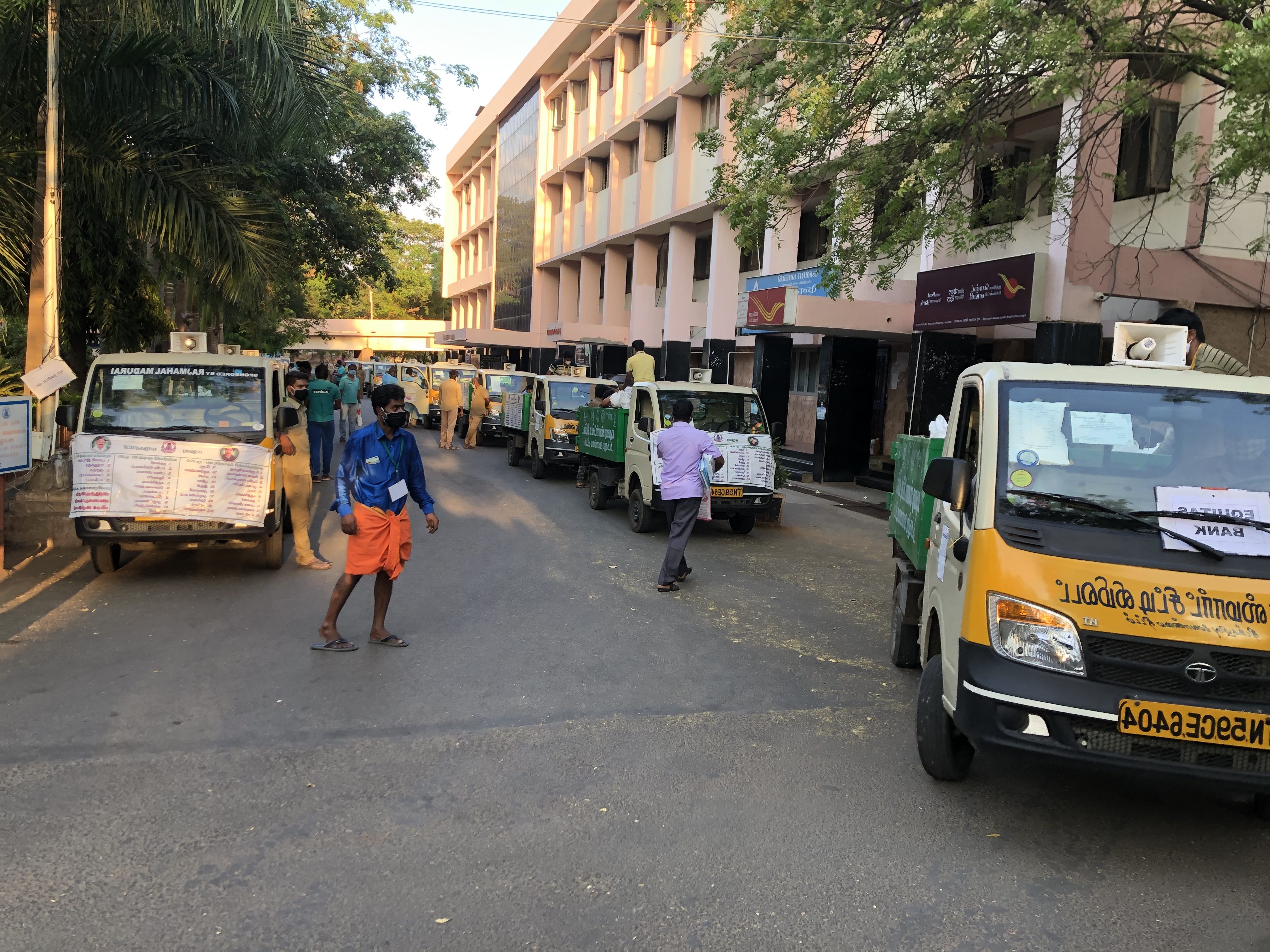 HOW I SOLD VEGETABLES DURING THE LOCKDOWN – APRIL 2020

Shared by Sidharrth Suryamurthy (PGP 2016) I got up at the sound of the alarm at 5.30 am. On the previous night, I ensured that I pack a bottle of water, a pair of gloves, hand sanitizer and the ID card. I quickly got ready, had a glass of oats and milk, wore facemask and got on the bike. I reached the Corporation office around 6.15 am. My team also reached by then. We got into our allotted vehicle, counted the number of bags, set up the announcement speaker, made note of the area to serve and then hit the road. 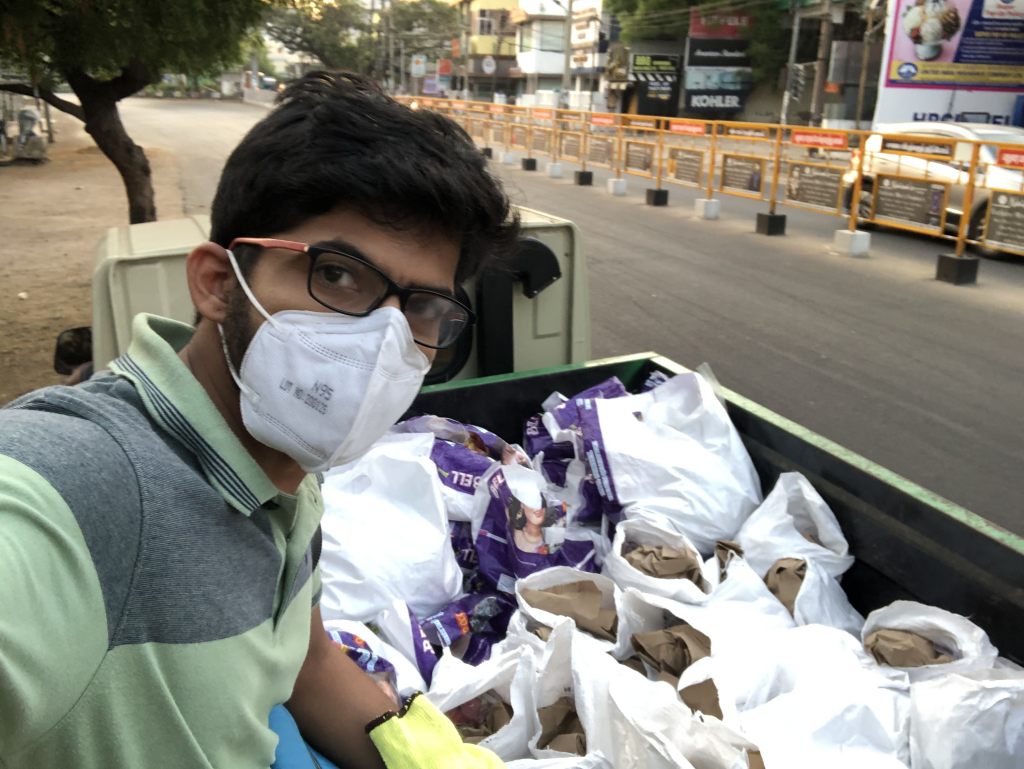 During the distribution of fruit and vegetable bags

We were a bunch of volunteers under the Rotary India team. Our job was to sell vegetables and fruits to whoever needed it. As we moved across the town, our vehicle shamelessly disturbed the eerie silence of all the streets by the blaring speakers. Thankfully, no one threw abuse at us rather were thankful that we could come to their place. We took nearly 3 hours to sell these essentials but on a very good day, we managed to do it in 45 minutes. The key, we realized, was to hit the densest and narrowest of the residential streets.

A bustling city popularly nicknamed in the region as the ‘Thoonga Nagaram’ – the city that never sleeps, a busy trading hub for the state of Tamil Nadu, also known for the famous Meenakshi Amman temple was unexpectedly brought to a standstill. Like every other location, the nation-wide lockdown that started on March 24 has not been kind to the city of Madurai and nearly 17 lakh residents. COVID has been an unprecedented event that no one prepared himself/herself to tackle.

Consequently, the reaction from the people on the eve of the lockdown announcement was chaos. Vegetable market had queues that stretched for several km. The officials realized that people were panic buying vegetables or essentials in the market leading to overcrowding. Social distancing, a new concept during the initial few days, was completely ignored. Stocks were quickly depleting in every store and that led to further panic. Madurai Corporation came up with a solution and took the lead initiative to overcome this problem.

The Corporation team immediately started procuring vegetables in bulk. Overnight, there was another team that measured and packed these vegetables into bags of standard size. The assorted bag with a minimum of 14 varieties of vegetables were packed and kept ready by early morning.  The Corporation’s fleet of Tata Aces, originally used for the solid waste collection, was thoroughly sanitized and kept ready for distribution. The model was pretty simple. Residents need not venture out far from their house during the lockdown. The Corporation will come to each and every house and supply vegetables at the doorstep. Initially, they tried out a sample run with 10 vehicles. It was well-received and so was soon scaled up to 100 vehicles. The missing piece of the model was the workforce required to do the distribution. Here, the community stepped in and volunteered to carry out the distribution.

Various organizations came forward and offered their support. Madurai Corporation was actively seeking feedback from the residents. Soon, they introduced bag of fruits as well. Every morning, teams assembled at around 6 am. Each vehicle was assigned a team of 3 or 4 members. On an average, there were 50 bags of vegetables and 50 bags of fruits to sell (100 bags in total). A single bag costs INR 100 and packed to last for a minimum of 3 days. Each team was also assigned an area to cover but had the flexibility to go to any street. An audio clip was played on loop through the announcement system. The Corporation team issued fresh masks and gloves every day. They also provided food and water to all the team members. Depending on the area and the response, it could take 2-3 hours to complete the sales.

The initiative was well-received. Vehicles started crawling to every street in the city. Residents were initially apprehensive of the quality of the vegetables. What we were delivering has been done with the best of intentions. So, we were able to build confidence with the residents. Word went out and soon this gained traction. The teams made sure that they returned to the same set of streets every 3-4 days to send out a reassuring message that the city is there to take care of them. We managed to get repeat customers as well.

‘We now entered the Corporation’s premise, rejoiced that we are the first vehicle to complete the sales. We filled a form and settled the account. We disbursed from the area and moved on to our routine life of work from home. Until the next day.’