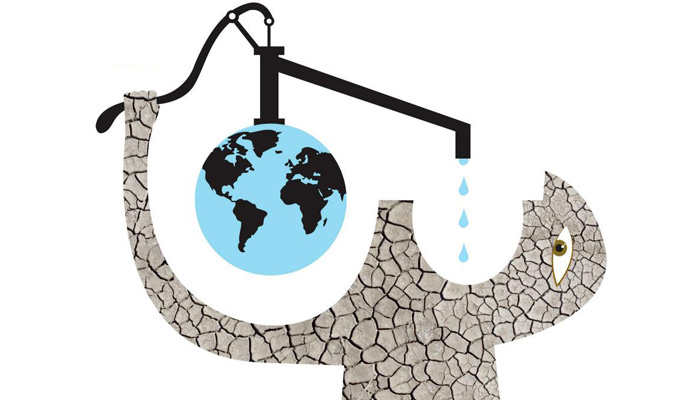 The world faces significant water challenges. There is a finite volume of fresh water that is accessible for human use, and we live in a world that has been steadily growing. The global economy is seven times larger than it was in 1960, and the world population is more than twice as large as in 1960. This growth is fed by water-intensive agriculture, and water resources are increasingly strained. Climate change and recent water crises suggest we may need a new path forward for managing water resources.

Water Use vs. Economic Growth

One natural way to reduce water use is to reduce economic growth. But, in its upcoming annual meetings, the International Monetary Fund will emphasize how growth can ensure higher standards of living for more people. China and India illustrate that growth allows emerging economies “Per capita GDP to catch up to more advanced economies” living standards. Thus, for both efficiency and social equity reasons, the plea by the Club of Rome of the early 1970s to halt economic growth to protect the environment is likely unconvincing.

A more realistic goal may be to decouple economic growth from water and other natural resource use. Sustained water productivity is the key. The idea is to do more with less water, and thus keep water use at its current levels. Future plans for water management becomes essential for the world economy growth balance simultaneously. Countries with scanty rains, close to seashores, low water level under the earth, black water areas, and abnormal climatic conditions had been managing with their own innovative methods with an increase in population, industrial growth and suitable crops could be guiding for water productivity requirements. REDUCE, RECYCLE, REUSE is basics for the same.

Shifting Structure of the Economy

The punch-line is an economy can grow without increasing water use. This is encouraging. Moreover, public policy can accelerate water-saving sectoral shifts and technological upgrades. Proper water pricing has a key role to play. Water is almost universally underpriced or available for free. This supports wasteful behavior and misallocating water in low-value activities. Improper water pricing also holds back investments and innovation in water-saving technology, as the return on investment remains too low.

How we can continue to improve water productivity and how we can promote sustainable water use in INDIA remains to us???