HOW IIMA 1992 CROWDSOURCED ITS PANDEMIC RESPONSE

HOW IIMA 1992 CROWDSOURCED ITS PANDEMIC RESPONSE 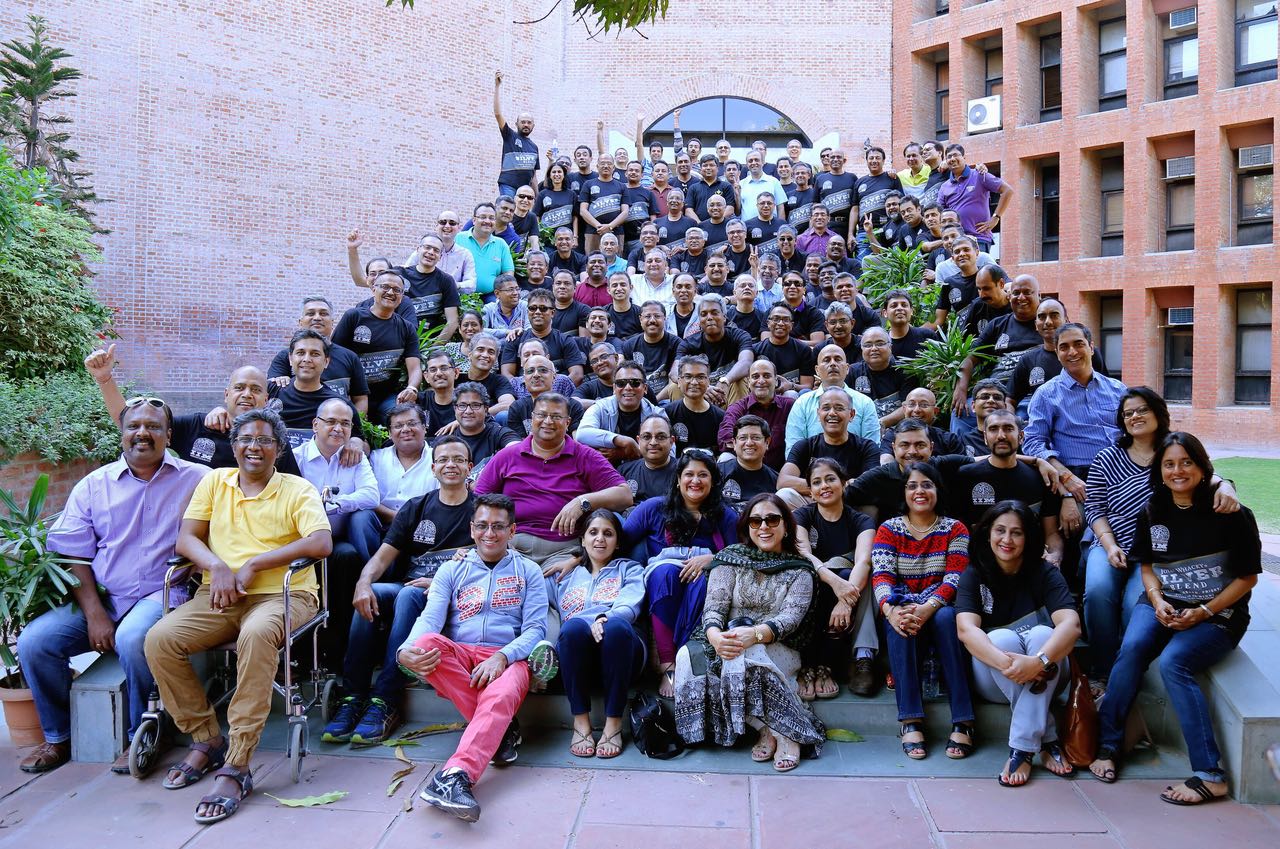 Partha Mohanram (PGP 1992) is the John H. Watson Professor of Value Investing at the Rotman School of Management at the University of Toronto, where he is also the Director of the India Innovation Institute. He obtained his B.Tech in Computer Science from IIT-Madras followed by a PGDM at IIMA (class of 1992), where he won the K.V. Srinivas Gold Medal for being the best All-Rounder student. After IIMA, Partha obtained his PhD in Business Economics from Harvard. Partha has been a leading academic for almost a quarter of a century. Prior to Toronto, he was on the faculty of Columbia University and New York University (Stern school). He is an expert in the areas of valuation and fundamental analysis. 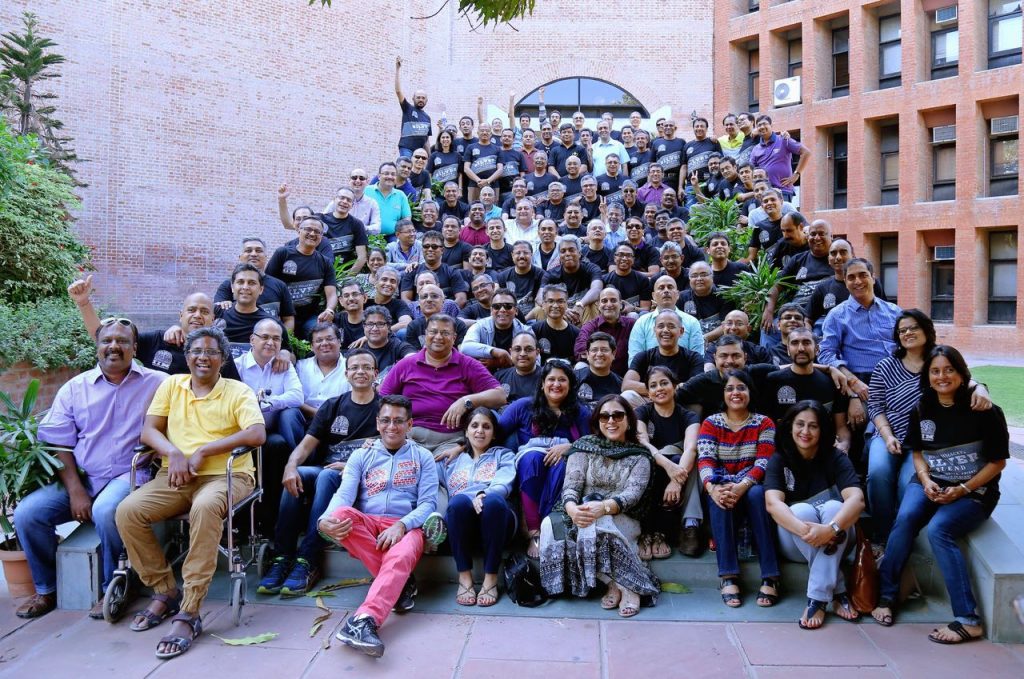 The batch during the reunion in 2016

We have always been a close-knit group of guys and gals. Whenever one of us NRI types would show up at one of the “nodal” points with many batchmates (Delhi NCR, Singapore, Mumbai, or Bengaluru) – all it took was a WhatsApp message, and “hajjaar” people would show up for an impromptu mini-reunion. Nowhere was this closeness more apparent than when we set a record at our 25th reunion with over 130 batchmates and their families attending a glorious meet up at Ahmedabad.

However, our meetings, real or virtual, were not just fun and games. In 2016, we raised over 2.6 crores as a batch led by the tireless efforts of Birendra Baid (used in the restoration of classrooms). But our batch really came to the fore during the first wave of the pandemic in 2020. A subset of our batch created a unique fundraiser “Kms for PPE”, where we logged our exercise and pledged to donate a certain amount per KM run/walked/biked to an NGO funding PPE for essential workers (Swasth Foundation). The fundraising was led by Sachi Thomas, while the dynamic duo of Sankar and Divya Krishnan handled the coordination with the NGOs. We raised over Rs. 55 lakhs (and probably lost a few unhealthy pounds too!). As a batch, we felt hopeful about how India was handling Covid.

The second wave was different. It started with sad and sobering news on a daily basis – a batchmate losing his in-laws and niece, another his wife, and then three losing a parent. We were also getting constant requests for help, sometimes for someone closely linked to a batchmate, but often for strangers. This is where the DNA of our batch to help others unconditionally came to the fore. Our batch responded to this crisis in three independent, yet related ways.

First – we created a Covid help subgroup, so that people requesting and offering help could meet and interact in a forum specifically designed for this. What started organically with a handful of members has since grown to over 70 people from across the globe – India, Singapore, UK, Europe, USA, and Canada. The different time zones actually turned out to be a blessing, as we were able to get round-the-clock coverage. We handled miscellaneous requests from all and sundry – ICU beds, concentrators, oxygen refills and drugs. While many of our batchmates chipped in, a few deserve to be singled out – Anu Malik, Rachna Aggarwal and Divya Krishnan for their dogged determination to help absolute strangers, Sankar Krishnan who always had an answer for every question (where to get a drug, which hospitals are free), Hemant Bhardwaj who helped strangers get drugs from Pharma companies at cost, Alok for answering all and sundry requests at odd hours, Sagar Kancharla for making calls to his superhuman friends in Andhra and Telangana, Deepak Jain finding contacts to respond to requests from Bihar, MP and many Tier 2 cities, and our pharma boys, Ambati Venu and Amal Kelshikar for responding to every request for a drug. I also want to mention G. Varaprasad, Mathew Isac and Murali Parna who kept forwarding requests from people all over India, ensuring that we weren’t just focusing on the big metros where most of us reside.

Second, we realized that one of the most crucial commodities in the midst of this crisis was information – knowing what resources exist and how to access them. We started with a rather unambitious google sheet with a few links, as and when these came to our attention. We constantly updated these links to include resources on hospitals, oxygen refills, concentrators, covid care centres, etc. Very often people were sharing useful information through Whatsapp, but these were in the form of images and documents which were difficult to access given the frequency of messages. We decided to create a document archive, where each such resource was filed in an appropriate category. The entire archive was made available through a public google folder. This Google sheet and folder was initially an internal batch resource, but we decided to share this publicly, so that more people would benefit. The sheet and folder would not be as useful as it was if not for folks like Vivek Rastogi, Ranodeb Roy and Vineet Kakarania, who ensured that relevant information was posted to our Covid group.

Third, we decided to restart our batch’s funding appeal. Spearheaded by Sachi, Sankar and Rachna, we decided to support two charities/NGOs that had pivoted their activities towards Covid relief. The first is The Antara Foundation, a public health NGO serving rural communities of millions through front line workers. The second is Teach for India, an educational NGO offering Covid relief to underprivileged children and their families in multiple cities. At the time of this article, we have already raised in excess of 45 lakhs, and plan to raise an additional 15 lakhs and add a third charity/NGO.

Our batch had “crowdsourced” its response to the pandemic. To spread the message of service and charity, I organized a webinar through the India Innovation Institute at the University of Toronto (where I work). Sankar Krishnan and I (along with other panelists) showcased how ordinary Indians were pitching in an extraordinary fashion. Hopefully, we’ve motivated more people from around the world to chip in. 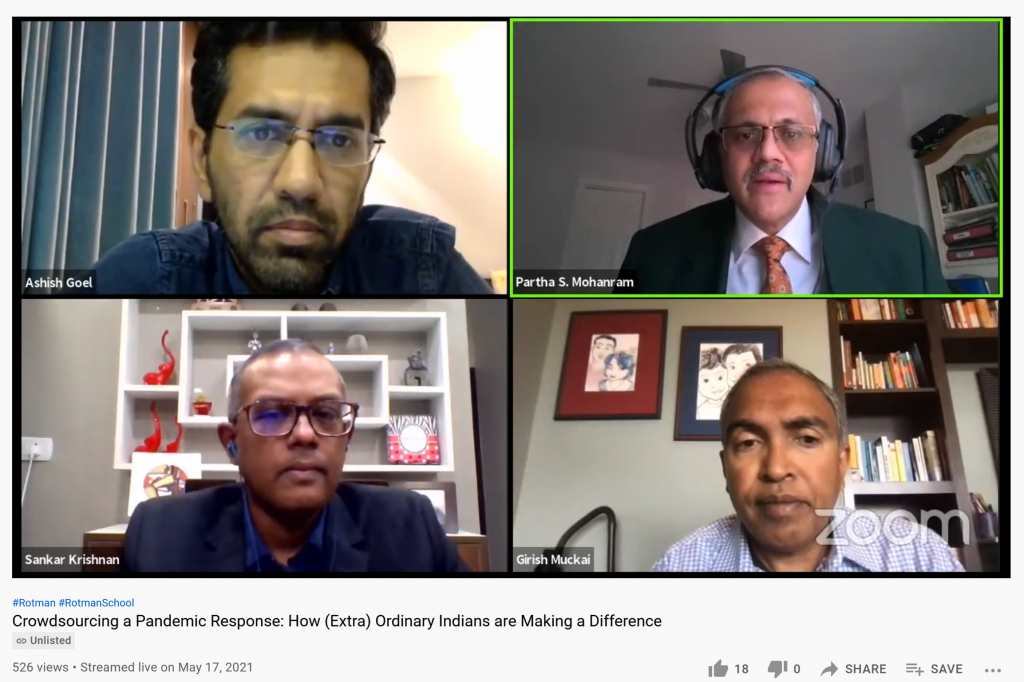 How is it that, despite any organization or hierarchy, we have worked seamlessly across multiple dimensions? In my opinion,  two factors have contributed to this. One, despite not having worked together professionally since IIMA, there’s an incredibly high level of trust amongst us – trust in our expertise and more importantly trust in our genuine intentions to help. Two, many batchmates have reached out to their personal and professional networks and called in favours for absolute strangers – there was no “I’m saving this call for my ….”.

This has been a trying time for our nation, as we have struggled to cope with a devastating second wave of Covid. However, IIMA 1992 has shown its true colours in this time of need. Instead of asking the defeatist “What can we do?”, we have made “Do what we can” our motto.