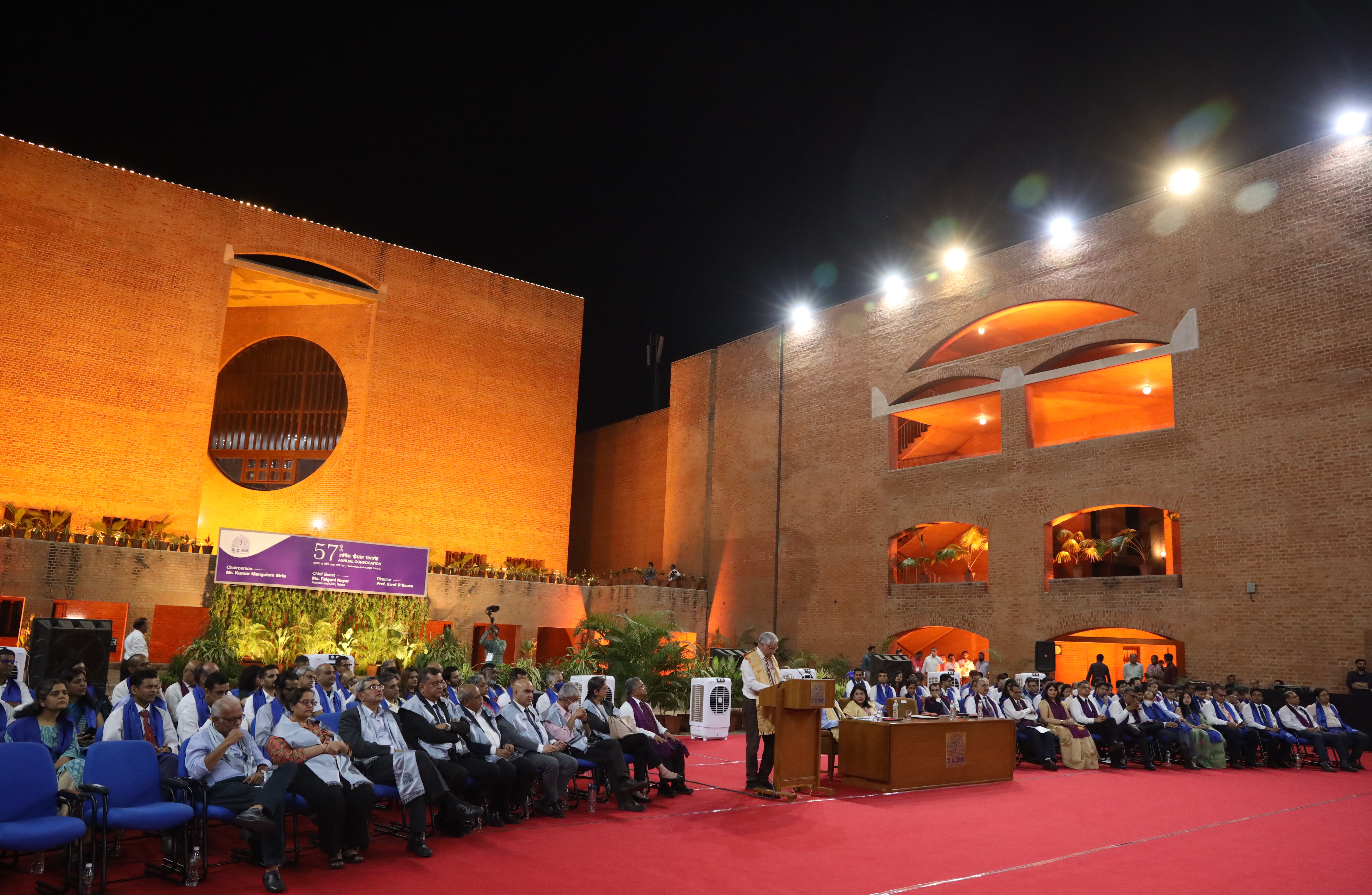 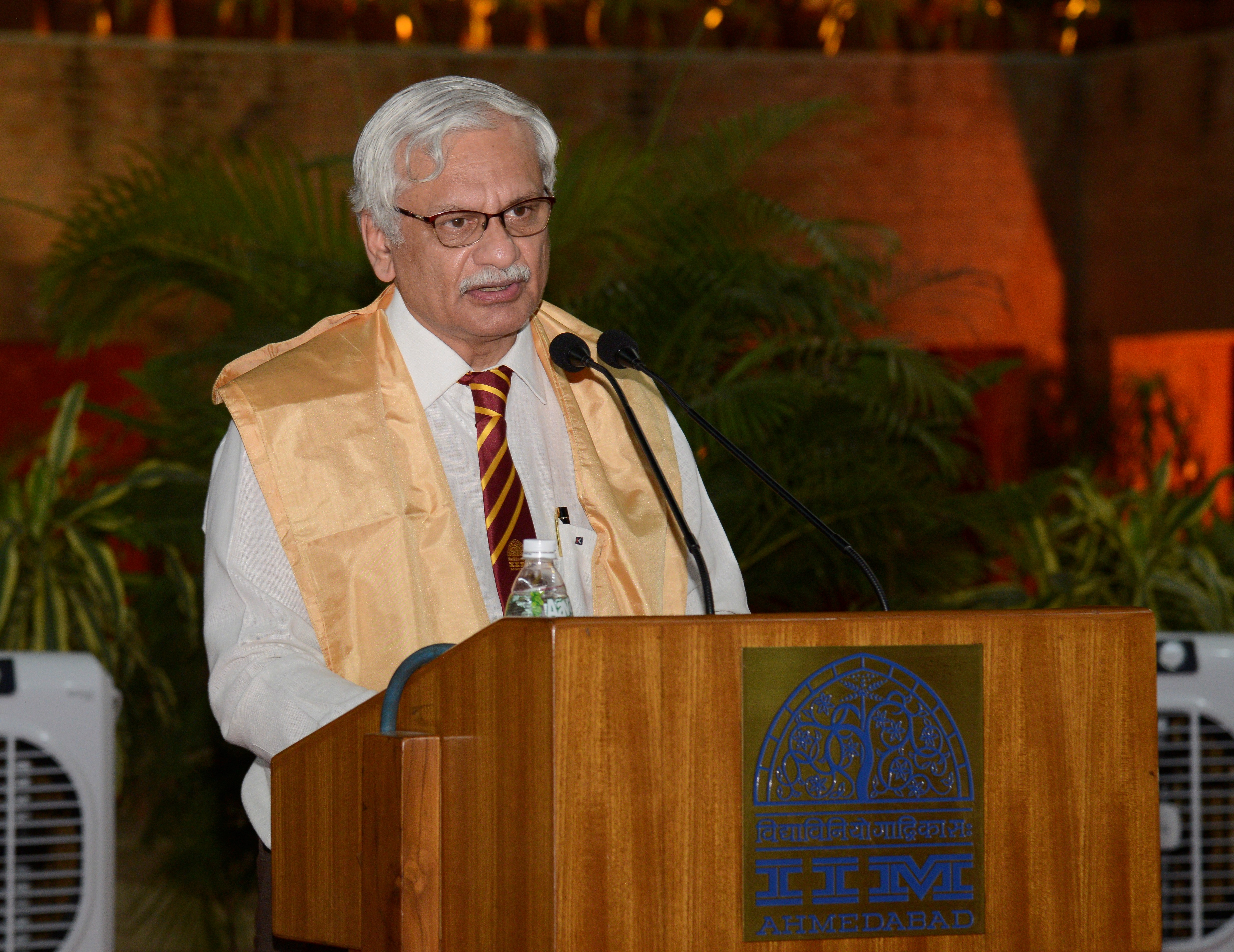 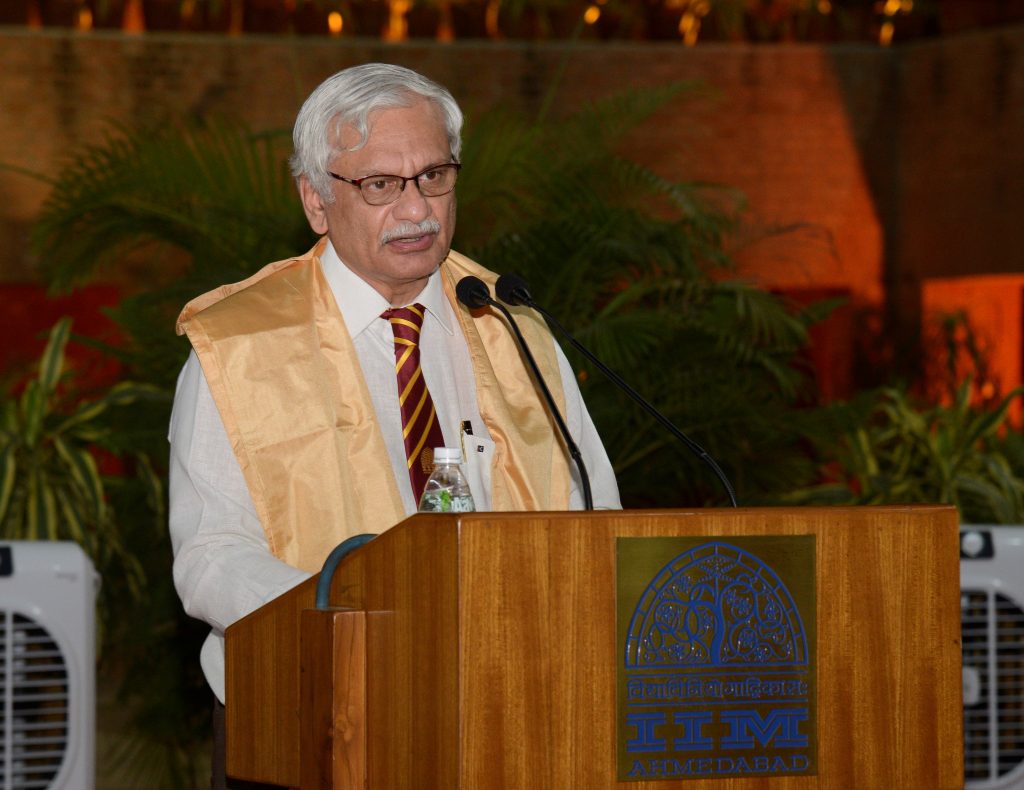 The last couple of years have taught us that certainty is fleeting in a world beset by uncertainty. When your batch joined the program, many thought the Coronavirus is temporary and we will all be back shortly to the familiar in-class interactions. Instead, we experienced different variants of the virus, lockdowns, stiff travel rules, curfews, masking, social distancing, and the demise of loved ones. Work was at a place called home, interactions were virtual in a place called Zoom, and vaccinations are what we require to safeguard ourselves from pathogens.

This remarkable time has been accompanied by relentless tech related change. Who would have imagined before 2021 that a country would make bitcoin legal tender as El Salvador did? Or that two billionaires would reach the edge of space in spacecraft that were funded privately? Or that someone would pay $ 69 million for a piece of digital art by an artist called Beeple at an auction of NFT at Christie? Or that Facebook would rebrand itself as Meta? Or Republic Realm would make the largest virtual real estate acquisition transaction in the Sandbox metaverse to co-develop it with Atari and introduce Gen Z and Gen Alpha to a voxelated gaming environment that resembles Minecraft? Or that Nykaa would have a blockbuster IPO?

We still do not have enough evidence to decide as to whether tech developments and AI will lead to net job creation or job loss. But it is clearly the case that there is a widening gulf between rich and poor. In a year that saw death and job losses the number of billionaires on Forbes’ 35th annual list of the worlds’ wealthiest exploded to an unprecedented 2,755 – which is 660 more than a year ago. And the McKinsey christened Mega 25, which encompasses companies such as Apple, Amazon, and Microsoft mainly in the technology (including ecommerce), electric vehicles, and semiconductor sectors, accounted for 40 per cent of the spectacular $ 14 trillion stock market gains during the pandemic. And this at a time when governments are struggling with pandemic recovery spending and climate and social spending fiscal bills are thirsty for resources.

Ever since the Great Financial Crisis and the growth in AI induced unemployment there has been a documented increase in stress, vulnerability, and a sense of loss of agency. Simultaneously the fascination for religious or other worldly pursuits that transport us to parallel worlds portrayed by Marvel and DC has grown and some of the recent student discussions have been on the film The Batman. Bruce Wayne is a representative of the times as an enervated, ambitionless and wealthy playboy. As Batman though he is the inverse — athletic and dedicated to combating evil. He is vulnerable and can be injured but is able to free himself from traps set by villains due to his athletic skills, willpower, and know-how in the form of high-tech weapons as well as the Batmobile.

As an audience we are asked to engage in a counter discourse to the dominant Enlightenment paradigm that stressed reason, science and technology as the means to attaining human progress. The Batman is Gothic in its emphasis on negative emotions such as fear, terror, and horror, and a rebellion against norms by frightening villains such as the Riddler who by occupation is, of course, an accountant.

In your coursework you would have been introduced similarly to the limitations of human rationality that along with the imperfections of markets leads to bubbles and busts. Eugene Fama who fathered the efficient market theory rejected the idea of housing bubbles just a year before the crisis. “The word ‘bubble’ drives me nuts” he said in an interview, adding, people are very careful when they buy houses. It’s typically the biggest investment they’re going to make, so they look around very carefully and they compare prices.” At the same time Bob Shiller, a pioneer in behavioural finance, was not only identifying the bubble but also predicting the bust. He was famously known as “Mr. Bubble” among his colleagues. He emphasized that people ought to study the mean variance model of forming an optimal portfolio as a first approximation but argued that they fell in love with the model too much and forget that there is greed and animal spirits. The 2013 Riksbank Prize in Economics in memory of Alfred Nobel honoured both. It stressed the importance of understanding human behaviour under financial stress as a route to knowing how financial markets function.

Mobility studies on the transmission of inequality, though not unequivocal, do find that wealthy families have a higher than random chance of continuing at the top of the wealth distribution in subsequent generations. The transfer of material wealth across generations is facilitated by family constitutions, family trust companies, foundations, and family offices. But families do face a threat to their fortune from spendthrift heirs, mismanagement, and the fallout due to competition among family members for control.

Firm growth makes it difficult for families to maintain majority ownership and it has led to the separation of ownership from control and the rise of managerialism. To ensure that corporate executives do not become insulated from those in whose interest they are supposed to operate they were aligned with owners by coupling compensation with the performance of a firm’s stock. CEO tenure has correspondingly shortened given the strong association between their turnover and poor performance. Greater scrutiny from boards and the investment community has resulted, till the recent emphasis on stakeholders and ESG, in less actions that benefit the larger community. Even though philanthropic contributions have increased in absolute terms data reveals that such contributions relative to revenue have declined. It appears that increased monitoring of CEOs and the reduction of CEO tenure in an increasingly volatile environment has caused a reduction in discretionary spending.

Yet there are highly publicized initiatives like the giving pledge started by titans like Bill Gates and Warren Buffet which suggests that the wealthy think that they have a moral obligation to not perpetuate dynastic wealth within the family but to spend it on public purposes. In the popular imagination this has not gone without criticism, one of them being, that this extends the power of the rich by giving them influence over the definition of the public good. It shifts decision making from the public to an elite driven private realm. Their business success allows a claim of having a superior ability to identify ways to throw light on social problems. This can undermine the democratic process and legitimize plutocracy or government by the wealthy.

The Batman, the film currently in discussion in your circles, speaks about these concerns about wealth and inequality. The wealthy Bruce Wayne learns that some of his family’s wealth that was given as the Renewal Fund to repair the city of Gotham has become a source of its dysfunction. He becomes alienated from his inheritance, refusing to meet with the Wayne Enterprises accountants. He discounts his father’s irresponsible behaviour of intimidating the press from revealing the tribulations of the city as a mistake made by a good man. Grievous wrong amongst family is to be condoned just as Vidura forgave Dhritarashtra.

The Renewal Fund that was meant to solve the city’s problems results in more corruption and philanthropy is unable to improve the lot of Gotham’s poor and orphaned. Batman believes that strengthening institutions is more important and works along with the city police department to investigate and plug the source of corruption. Interestingly the villain, Riddler, also has this progressive cause of exposing how funds for the vulnerable have been squandered. It is just that his path is violent and our superhero who would otherwise have been on his side has to stop him for trespassing away from the moral code of the institutions that provide social order. Riddler is the representation of the violence and negativity in ourselves whilst Batman is our capacity to deny that part of ourselves and to be in control of our destiny.

It is somewhat incongruous that we have come to believe that strong individuals and super personalities can solve the social issues of our times. Individual action is a requirement for change but we should not forget that more important is long term institutional transformation.

We assume too readily that rationality motivates us and that it is ‘the economy, stupid’ that drives political calculations. But strong leaders across the world such as Putin or Xi or Erdoğan or Duterte or even those at home have other agendas. Not everyone looks at the world through a balance sheet and some respect strength and adherence to their perspective so much that they will not backdown even if it causes deep economic pain. Most analysts thought that Putin’s expansionist agenda would be contained because sanctions would destroy business and that would be irrational for him to sustain. Wrong. In the initial years of his rule Erdoğan worked hard to introduce reforms and improve the economy. Thereafter he destroyed institutions such as the judicial system and the bureaucracy and introduced economic logic defying interest rate cuts in the face of high and persistent inflation. India too has had some baffling economic policies.

For managers, dear students the landscape has changed. It is no longer about short-term financial targets and efficient execution. There is no worse example of leadership than the CEO of Better.com who on a Zoom call informed 900 staff that their employment in the mortgage company had been terminated, effective immediately. Ever since the Great Financial Crisis, and even more so since the pandemic, there is some room for a swashbuckling Elon Musk but soft skills such as compassion and collaboration are going to be a top requirement. Your views on corporate strategy will be important but so will those on climate change, discrimination and inclusion, human rights, culture wars and a host of other issues. You will face challenges from outside the organization as well as from within. Welcome to tumultuous times. You are going to be wrong sometimes and you should embrace your vulnerability. Encourage dissent and constructive criticism. I am confident you have learned much from each other and from the campus and you will go very far.

I spent some of my formative years in the city of Kolkata and I would recommend that everyone visit the city at least once. It is like no other. It reminds me of the opening lines of Dickens’ A Tale of Two Cities which read: “It was the best of times, it was the worst of times, it was the spring of hope, it was the winter of despair, we had everything before us, we had nothing before us”, When you visit do go to Mother Theresa’s home for children. A poem written by her is engraved on its wall. Allow me to read a few of the verses:

If you are successful, you will win some

False friends and some true enemies;

The good you do today

Give the world the best you have,

And it may never be enough;

Give the world the best you’ve got anyway.

As alums of the institute give to the world your time, some of your wealth, and the best of yourself. We will look on with pride and happiness at your achievements and we will share your sorrows. May you be joyful and successful. अनेको शुभकामनाए| 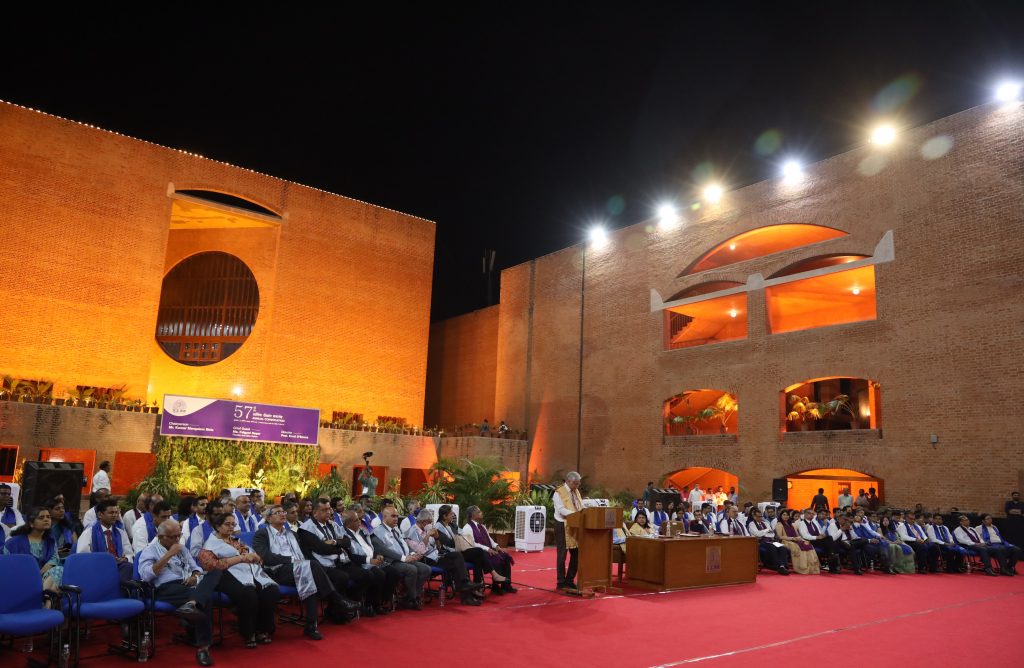 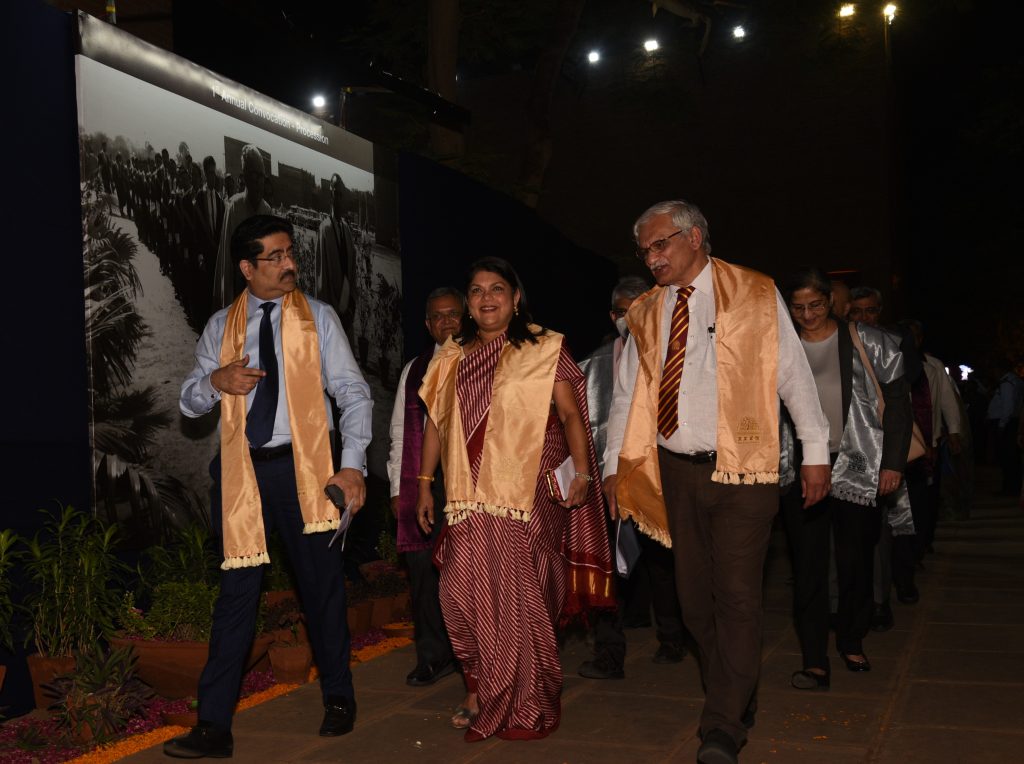