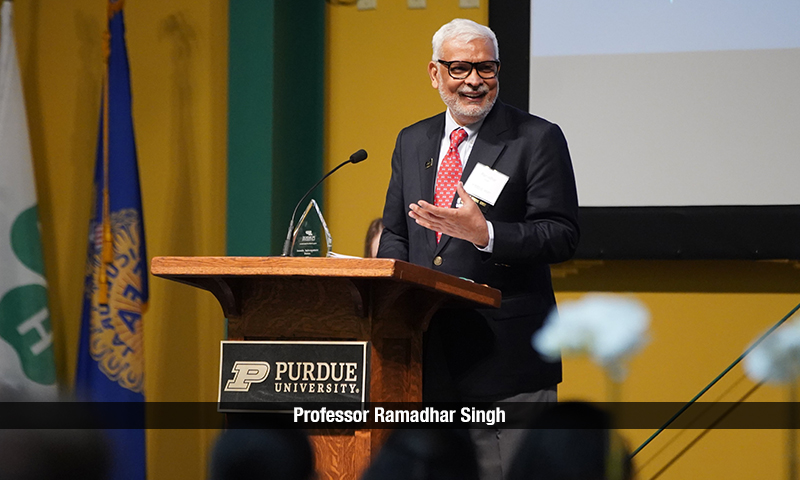 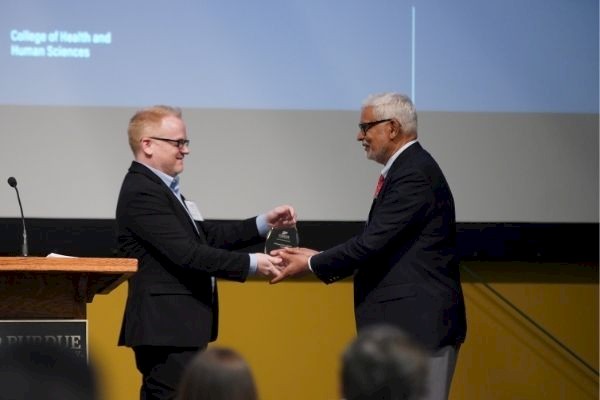 Experimental Social Psychologist Professor Ramadhar Singh, who served as a faculty in the Organisational Behaviour area during 1979-88, was conferred the Purdue University Distinguished Alumni Award in Psychological Sciences by the College of Health and Human Sciences at West Lafayette, Indiana, USA on March 25, 2022. He is one amongst the only three psychologists who have received this honour from Purdue University till date. Accepting the award on March 25, 2022, Professor Singh said, “Being recognized with this award makes me fully satisfied with my life journey as a psychological scientist.”

PROFESSOR SINGH AT IIM AHMEDABAD: 1979-1988 IIM Ahmedabad invited Dr Singh, the then assistant professor of psychology at IIT Kanpur, for a seminar on Models of Reward Allocation in December 1978. His talk impressed the then faculty and the Institute Leadership so much that they offered him a full professorship in Organisational Behaviour at the age of 34, an unusual gesture of respect in Indian academia.

Professor Singh enthusiastically promoted basic research at IIM Ahmedabad, and was appointed as the Chair, Research and Publications (1980-82) even when he was on probation of his professorship.

Through his rigorous research on managers, Professor Singh not only questioned several facts, principles, and models of management as well as psychology but also offered novel perspectives on them. His publications were in the international journals of repute [i.e., Child Development (1988), Developmental Psychology (1981), International Journal of Psychology (1986, 1988), Journal of Experimental Social Psychology (1985, 1986), and Organizational Behavior and Human Performance (1983)]! His 1983 article is notable because it was the first article from India in this key journal of organisational behaviour (Impact Factor 4.941).

The foregoing Organizational Behavior and Human Performance paper led to abandoning of the then widely popular as the Fiedler’s Contingency Model of Leadership Effectiveness (Fiedler, 1967). Professor Singh challenged the contingency model where through a series of four experiments on reward allocation based on inputs about attitude and performance of the claimants, he showed that Fiedler’s least preferred co-worker (LPC) scale may be measuring cognitive complexity rather than value for task or interpersonal success in group situations as claimed erroneously. From IIT Kanpur, he had already shown a better way of measuring the favourableness of leadership situations of the theory in 1979. His 1983 paper has been cited in many textbooks of industrial and organisational psychology, organisational behaviour, and management.

While at IIM Ahmedabad, Professor Singh advanced psychology as science across the nation through his membership on the Psychology Panel (1983-87) and the Standing Advisory Committee on the Centre of Advanced Study (1986-88) of the University Grants Commission (UGC), New Delhi. The UGC had also appointed him the National Lecturer in Psychology (1985-86) and sent him to deliver lectures on his research in information integration at three universities (Banaras Hindu University, Varanasi; Sri Venkateshwar University, Tirupati; and University of Poona, Pune) situated in three parts of the country.

Professor Singh served as a Consultant to the Ministry of External Affairs on foreign students in India (1985-86) and to the Government of Gujarat on manpower planning and training in the Irrigation Department (1986-88). Moreover, he provided his expert services to many industries in solving issues related to human relations.

Research reported in Professor Singh’s chapters on Imputations about Missing Information in Cognitive Algebra (1991) and Imputing Values to Missing Information in Social Judgment (2011) that ensured his listing among Faces and Minds of Psychological Science by the Association of Psychological Science in 2013 was completed at IIM Ahmedabad. Likewise, his three other lead single-authored articles in Organizational Behavior and Human Decision Processes 2.0 published during 1995-97 were based on the data that were gathered during his tenure at IIM Ahmedabad per se.

In 1988, Professor Singh joined the National University of Singapore (NUS) where he also served as its first professor of psychology for 13 years (1997-2010). Thereafter, he served as the distinguished professor of management at IIM Bangalore (2010-2016). He has been at the Ahmedabad University since July 2016.

OVERVIEW ON PROFESSOR SINGH’S SCHOLARSHIP Prof. Ramadhar Singh has been an outstanding researcher throughout his life and is internationally renowned for his original thoughts and contributions. He has been an advocate of testing causal hypotheses through experimental methods across the diverse areas of his research. The general picture that emerges from his findings is that humans are active and motivated tacticians (Singh, Choo, & Poh, 1996). They can accommodate conflicting goals as if they were cognitively rich, not miser (Singh & Teoh, 2000). Also, Indians believe in shaping their future through trying, which is independent of capability (Singh & Bhargava, 1985; Singh, Gupta, & Dalal, 1979). The social circle of responsibility is wider for Easterners than for Westerners (Singh et al., 2012)). And the processes underlying most behaviours operate serially as if cognition preceded emotion (Singh & Rai, 2021; Singh et al., 2017).

In 2017, an article on research productivity in management schools of India also appeared in the Omega: The International Journal of Management Science (Sahoo, Singh, Misra, & Shankaran, 2017). According to the results reported, Professor Singh was the first among organisational behaviour researchers and the fourth among the top 5% of 40 management researchers in India.

The Association of Psychological Science, Washington DC, USA recognised Professor Singh as Faces and Minds of Psychological Science from India in 2013. As of today, he alone represents India on this site. IIM Indore bestowed upon him the institute’s first-ever Lifetime Achievement Award for Excellence in Research in June 2021 and by doing so celebrated “… his commitment to and the quest for knowledge of human behavior in organization and society.”

The Humanities and Social Sciences Department at IIT Kanpur established the annual Prabha and Ramadhar Singh Distinguished Lecture in Psychology from January 2022 to celebrate Professor Singh’s sustained contributions to the advancement of psychology and management as science in Asia.

MY INTERACTIONS WITH PROFESSOR SINGH Prof. Singh mentored Dr Ajit Kumar Dalal at IIT Kanpur (1975-78). Professor Dalal taught my mentor and PhD supervisor, the former IIM Ranchi Director Professor Shailendra Singh at the University of Allahabad (1976-1981). I had completed my PhD in organisational behaviour from IIM Lucknow (2008-2012) under the tutelage of Professor Shailendra Singh. According to this academic pedigree, I can proudly claim myself to be a great grandson of Professor Singh!

Professor Singh’s regular scientific publications, citations in textbooks of management and psychology as well as in journals of multiple disciplines, and national and international accolades received from time to time had always been catching our attention. My PhD supervisor, Professor Shailendra Singh (at IIM Lucknow) would often narrate stories of Professor Singh’s dedication to research in management and psychology and would give me his papers to read. Reading those papers had inspired me (as well as many management PhD scholars at IIM Lucknow and other Indian institutes) to strive for excellence in research as well as teaching. The name of Professor Singh has always been a source of inspiration for Indian academics.

I had the good fortune to be influenced directly by Professor Singh when he conducted a Workshop on Research Methods and Data Analyses at IIM Lucknow in 2012. He not only taught me how to collect experimental data for testing causal hypotheses but also how to analyse them correctly, using regression-based conditional process analyses. The outcome is that I personally now run a programme on research and data analyses from IIM Ahmedabad.

In 2013, Professor Singh processed my one manuscript co-authored with then Mentor Professor Shailendra Singh for publication in the IIMB Management Review. He suggested an altogether new interpretation of the findings reported and a better organisation of the manuscript. Revising the paper along the lines of his suggestions strengthened our manuscript considerably and made the findings really stand out. His comments were extremely helpful in guiding my research program thereafter and helped me to publish many more findings in reputed national and international journals. The findings were eventually published in a book titled First Among Equals: TREAT Leadership for LEAP in a Knowledge-based World which is now prescribed as a recommended reading in the compulsory ‘Leadership Skills’ course that is offered to the students of the one-year Post Graduate Programme in Management for Executives (PGPX) at IIM Ahmedabad. The book has also been prescribed as an essential reading for students of management at the Chittagong Independent University, Bangladesh.

I will forever remain indebted to Professor Singh for his guidance and training during my formative years. He continues to stay in touch and encourages me to strive for more impactful research. He is kind enough to share his vast knowledge with a junior colleague like me. I have no hesitation in claiming him as a mentor to me and academic great grandfather!

PROFESSOR SINGH’S REACTION TO RECEIVING THE DISTINGUISHED ALUMNI AWARD Accepting the award on March 25, 2022, Professor Singh said, “Being recognized with this award makes me fully satisfied with my life journey as a psychological scientist.”

For advancing psychology and management as science in such a unique and dedicated way in India and drawing the international attention to the Indian scholarship, Professor Singh does deserve the Distinguished Alumnus Award of not only Purdue University (1970-73), as it has already been done, but also his first alma mater Bihar University wherein he had his initiation to psychology (1961-68). He is a role model of candidness, commitment, creativity, dedication, and persistence to his peers and younger generations. He is undoubtedly one of the brightest minds of management research and education that has dazzled not just Indian scholarship but also scholarship worldwide through his ingenious contributions that are complex yet simple to understand.

Prof. Singh is fond of the following quotation from Munshi Premchand: