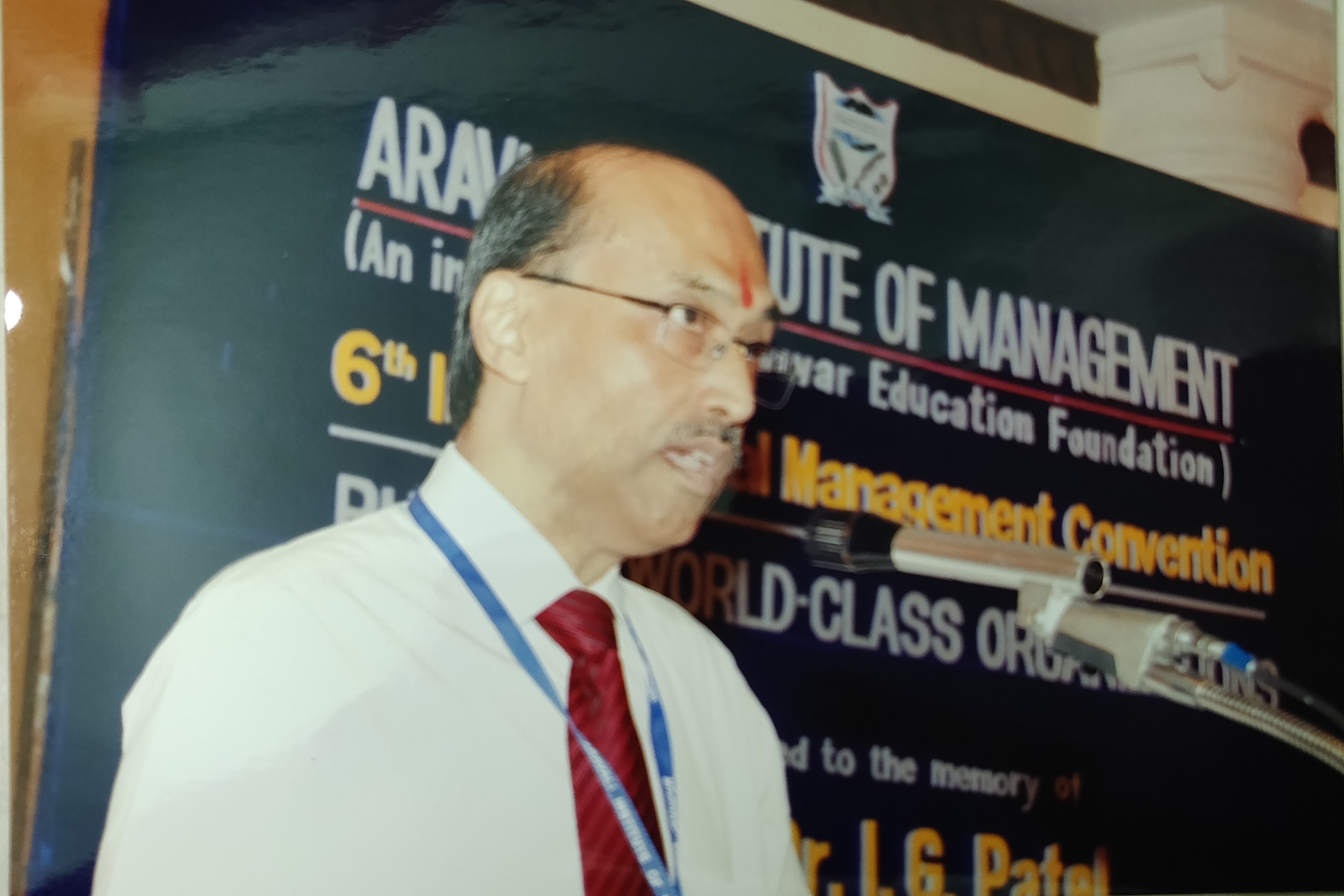 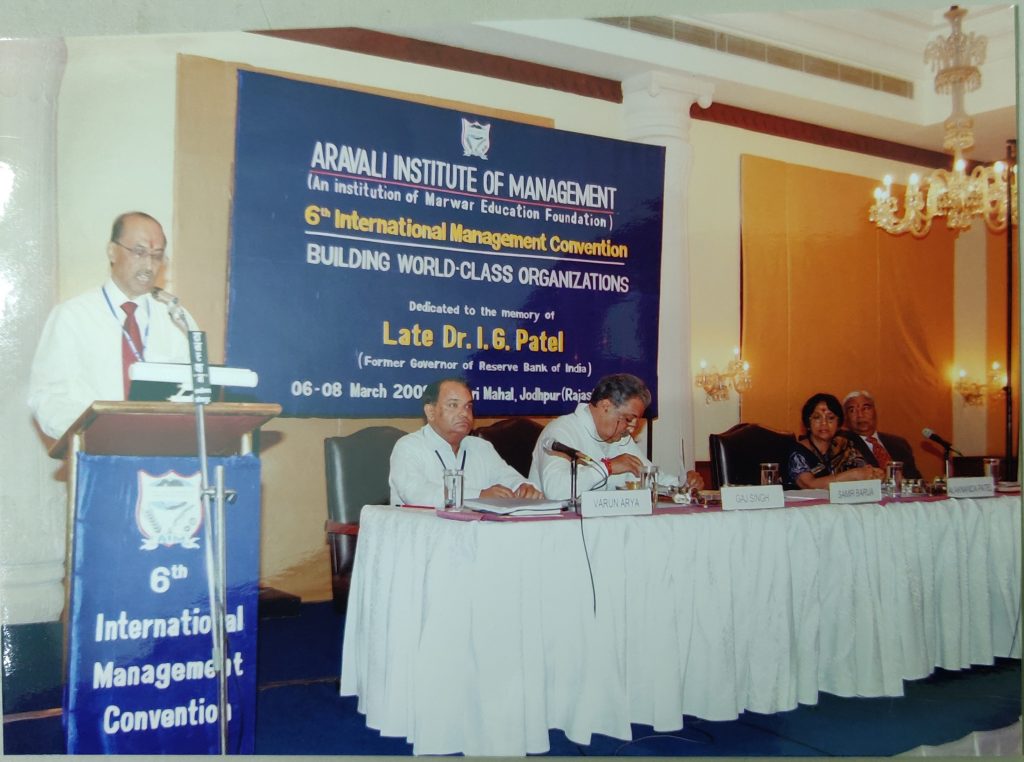 Shared by Mr Varun Arya (PGP 1983), “Prof. Samir Barua delivered this Valedictory Address on 08 March 2009, during the 6th International Management Convention organised at Jodhpur in memory of late Dr. I G Patel, which was also attended by Dr. Alaknanda Patel. It was an insightful and interesting lecture, which at my request, Prof. Barua had also sent me in writing later. It is really a wonderful write up, very much relevant and of interest to all those associated with IIMA.” 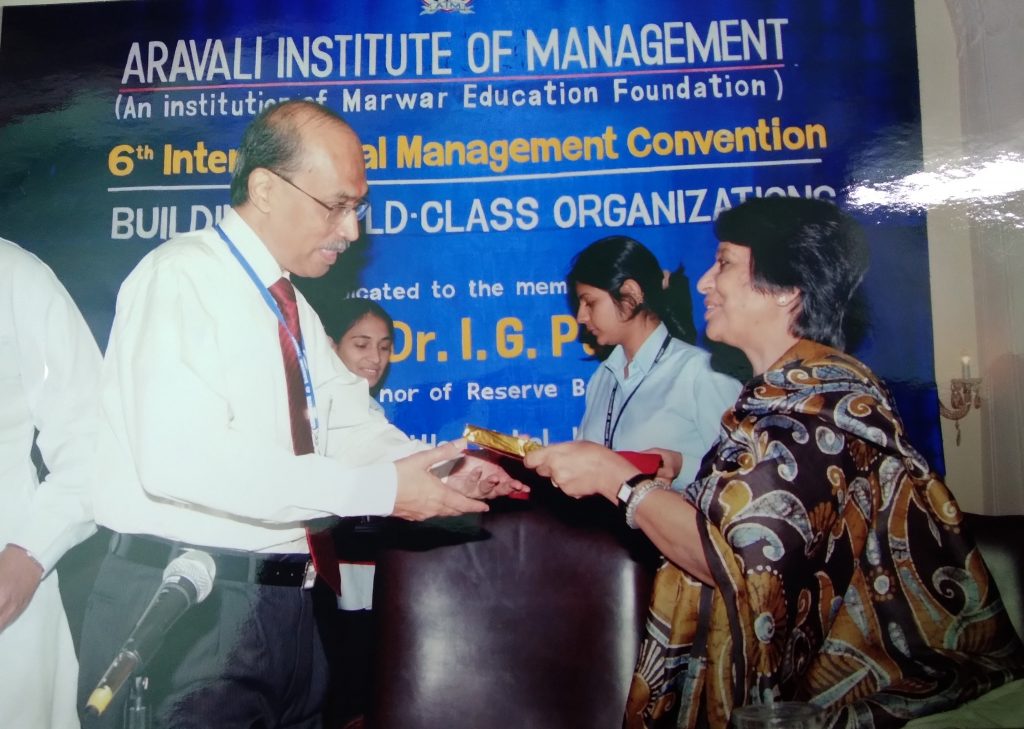 Maharaja Gaj Singhji, Chairman of the Board of Governors of Aravali Institute of Management, Prof. K N Bhandari, Director, National Law School, Dr. (Mrs) Alakananda Patel, Eminent Economist, Prof. Varun Arya, Director, Aravali Institute of Management, Distinguished Guests in the audience and my dear students, it is a privilege to participate in a convention organized in the memory of Dr. I G Patel. He was a great son of India. Besides being a friend and well wisher of IIM Ahmedabad, Dr. Patel was directly associated with the Institute, first as Director for a brief period of two years in the early eighties and then as Chairman of the Board of Governors for a period of 5 years in the second half of the nineties.

I am here to speak to you about the Indian Institute of Management Ahmedabad (IIMA) – the making of an Institution. I normally hesitate to talk about the Institute because I have been too intimately associated with the Institute. I have been with the Institute for 33 years – first 4 years as a student, the next 27 years as a member of the faculty and the last sixteen months as Director. It has indeed been an honour to have been a part of IIMA for so long – and yet that precisely is the reason for my hesitation to talk about it. I cannot but be a little coloured in my views – may be far too euphoric about its achievement and perhaps a little too critical about its failures – I have known the Institute so long and so closely! If you do notice traces of these excesses I can only urge you to ignore them.

IIM Ahmedabad is a forty seven year young Institute. It was established in 1961 through the unrelenting efforts of one person – Dr. Vikram Sarabhai who brought together the Government of India, the Government of Gujarat, the Indian Industry, the Ford Foundation and the Harvard Business School – in a true Public Private Partnership – well before PPP became fashionable. His tireless efforts resulted in creation of IIMA. Since he belonged to Ahmedabad, the Institute got located in Ahmedabad. Over time, IIMA has become an iconic Institution in the field of management. It has become an example of what is possible despite the limitations of the larger society that it is a part of. How did this happen? Over the next fifteen minutes or so, I would tell you briefly about the making of this Institution.

The strength of an edifice lies in its foundations. The strength of an organization lies in its values and culture. IIMA was fortunate to have Ravi Mathai, a remarkable person, as its first full time Director. He laid the foundations of a value system based on honesty and commitment and culture based on openness and equality. Some of the principles he followed were simple and yet powerful symbolically – for example, he insisted that everyone should address him by his first name, Ravi. That seemingly innocent whim of a person destroyed the notion of hierarchy in the organization. Instead, the attention got focused on the task a person was doing in the organization. No task was small or big – all tasks were equally valuable contributions to the operation of the Institute.

IIMA is also one of the few institutions – if not the only one that even after four and a half decades does not have a director’s residence. The director resides in an accommodation meant for a faculty member – even the junior most. Ravi’s manner of empowering individuals led to exceptional commitment towards the Institute. After serving for about eight years as Director, Ravi voluntarily relinquished the office of the Director – thereby establishing another great tradition. He stepped down asserting that non-permanence at the top is necessary for an organization to grow in stature through induction of fresh ideas at the top. He established a corollary to the tradition by opting to stay with the institute as a faculty member. These precedents set by Ravi have become the ideals that have driven IIMA over the years. Barring the two years that Dr. I G Patel was Director, IIMA has always had an erstwhile faculty member as Director of the Institute and the person has invariably re-joined the Institute, as a faculty member on completion of his tenure as Director. The process has not only ensured commitment but also accountability at the top.

The Institute’s emblem is a tree, patterned after the stone carvings in a centuries old mosque, in the heart of Ahmedabad. A tree (vriksha) has always been associated with (bodha) knowledge in India. The motto of the Institute – Vidya Viniyogah Vikasah means ‘growth and progress through sharing of knowledge’. The Institute chose deliberately to call itself an Institute of Management (and not of Business) to reflect its desire to transform all types of organizations and not just business organizations. The Institute’s mission is to professionalize the practice of management through education and research in management that is useful for all types of organizations. The name, the emblem, the motto and the mission, so wisely chosen by the founding fathers, have guided the destiny of the Institute.

The Institute began by designing and conducting executive education programmes and started the two year flagship programme – the PGP (Post Graduate Programme in Management) only after faculty members had acquired some experience of teaching courses in management. The teaching material – cases and notes in the initial years were from Harvard Business School (HBS). The academic association with HBS continued for almost a decade and half that saw training of IIMA faculty at HBS, exchange of faculty with HBS and use of teaching material from HBS. The period was used by the Institute to develop its own repertoire and teaching material. The strategy can be likened to transfer of technology and indigenisation of processes that happen in business organizations. In the process, IIMA became the exponent and propagator of the case method of education in the country. The Institute today has the largest collection of relevant cases and teaching material in the context of an emerging economy.

The early seventies saw introduction of two new academic programmes – the PGP-SPA (Post Graduate Programme with Specialization Package in Agriculture) and the FPM (Fellow Programme in Management). The first programme is an extension of the PGP. The programme was created to serve the managerial needs of the undermanaged agriculture and allied sectors – the key sectors of the economy from the point of view of making a difference to the less privileged sections of society. FPM is the doctoral programme of the Institute. It was started to provide qualified academics in management as well as to help the process of research and knowledge creation in management. The diversification by the Institute through these two programmes was done only after the first programme had stabilized. The timing was well chosen by the Institute.

The mid-eighties also saw the birth of the FDP (Faculty Development Programme). The Institute had earlier been sporadically conducting the QIP (Quality Improvement Programme) for management teachers that used to be funded by the UGC. It decided to design and offer its own separate programme at a nominal fee to help improve the quality of management teaching in the country. In addition to going through a set of courses, the participants get an opportunity to work on their own projects, interact with faculty and students of other programmes over the 17 weeks they spend on campus. In the last two and a half decades, over 750 teachers in management have benefited from the FDP.

The early nineties saw a new challenge thrown at the Institute. Liberalization was the mantra that was sweeping the country. The government decided to freeze the grants to government institutes – in particular, centrally funded academic institutions of higher learning – and suggested that they should move towards greater financial autonomy. A committee was set up under Chairmanship of Dr. Verghese Kurien to review performance of IIMs and recommend measures to strengthen their manner of governance. The Kurien Committee recommended that IIMs, along with being asked to become financially independent, should be granted full operational autonomy. The government accepted the recommendation and reduced the funding for IIMs (and thereby forcing them to become financially more independent), but it did not give the operational autonomy that the Kurien Committee had suggested as an inseparable measure. The nineties were therefore a struggle for the Institute as it had to completely overhaul its financial model. The Institute started another new activity – customized executive education to bolster its finances.

The early 2000 saw another challenge. Instead of autonomy, the incumbent government desired much greater control over the functioning of IIMs. The Institute had to muster all the support it could generate from various quarters to fight back and retain whatever operational autonomy it enjoyed.

The Institute at this juncture is facing several fresh challenges – some from within and some from without. The bill allowing foreign academic institutions to set up campuses in the country to offer academic programmes is likely to be passed into an Act soon. The Institute will have to gear up for the challenge that would be thrown up from foreign Institutions that are far better endowed financially. The Institute is already facing challenge from private domestic institutions that are unfettered by governmental constraints.

The other challenge that the Institute is facing is in the area of creation and dissemination of knowledge. Over the years, the Institute has fallen behind – in this aspect of its mission. It needs to put in concerted efforts to get back its pole position in the area. Success sometimes can be debilitating – it leads to complacency. In the sixties and the seventies – everyone worked with commitment to establish the Institute. Today, since the Institute is already so well established, the attitude may well have changed to one of exploiting the name. The pioneering spirit that leads to commitment, innovation and institution building needs to be brought back for the Institute to go to the next level of achievements. How well the Institute deals with these challenges would determine whether its dream to be recognized among the very best management schools in the world would be realized.

Forty seven years may appear a long period of time but in the life of an organization that is built to last the period could well be called the early years. A few more decades perhaps need to pass for us to be able to judge how good an institution is IIMA. I would certainly not be there at that time, but many of you – the youngsters present here – would be around. I would leave it to this generation to judge at that time whether IIM Ahmedabad fulfilled the dream it has today – that of being known as a great institution.