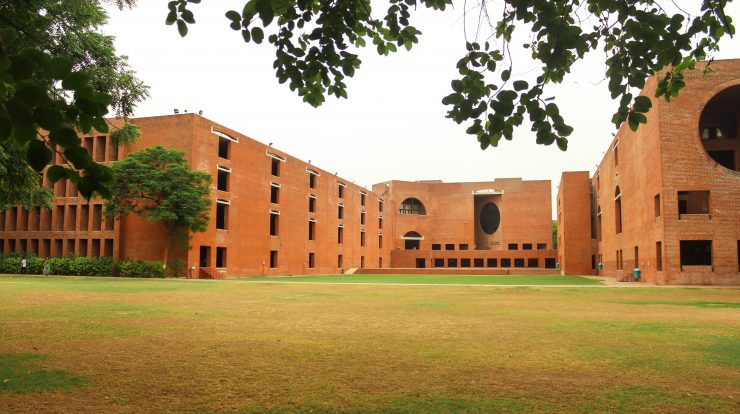 I was going to start this by saying some things never change, but that isn’t true. Everything changes. The Ahmedabad I saw in 2017 wasn’t the Ahmedabad I remembered from 2007, or even from my most recent visit to campus in 2012.

It started when the Uber driver took us through the new campus gate. In the two years of the PGP, I never entered or exited through the new campus gate. It felt almost like an alien landscape. I’d spent a couple of days before the trip wondering if the entire thing was going to prove a washout and a waste of three precious vacation days, and the first sight of all the poured cement made me think I’d been right and the wisest thing would be to ask the car to turn around and go right back to the airport.

The location wasn’t the only different thing about this visit. The traffic was far worse than I remembered. The flyover in front of the main gate has significantly reduced the aesthetic appeal of the approach to IIM Ahmedabad. The red bricks are crumbling, the library is being renovated, and there are several new cafes dotted around campus. It isn’t unrecognizable, but it isn’t the same.

I alighted from the cab, trying not to think too hard about the cement or the fact that I was going to have to spend rather a lot of time doing baby-related stuff, which definitely was a change from my PGP days.

I had barely found my bearings than I was greeted by a good friend who had arrived that morning, with her own daughter, and was on her way out to lunch. That was an encouraging sign, and so we registered, settled into our room and then went down to the IMDC dining hall.

The door opened on my classmates: people from my section, people from my dorm, people I had barely known but with whom I had the inevitable intersections of our shared experience at IIM Ahmedabad. It took only seconds for my doubts to vanish in the infectious excitement of that moment as I joined in the laughter and greetings. It didn’t matter that I hadn’t spoken to some of them since Convocation on that distant March day. We were all there, and all of a sudden I was very happy to be there.

With nothing planned for the afternoon, we made our way to the old campus.

Most of my memories of IIM Ahmedabad are of the old campus. The new campus is representative of first term classes, summer placements and finals, but the old campus is where we had IIMACTS rehearsals. It’s where we walked barefoot on LKP eating popsicles at three in the morning instead of preparing the next day’s cases. The old campus has Vikram Sarabhai Library, with all the nights spent curled up on a comfortable red couch reading amid the delicious book-smell that no Kindle can replicate. The old campus has –

I could go on, but I think I’ve made my point. Other people probably have other fond memories, but these were mine, and I’d found them.

I met one of my dorm-mates on LKP. We visited Rambhai for tea and bun-maskaa, taking our husbands with us. We’d both probably praised him too highly in the past, giving rise to expectations of nectar and ambrosia instead of what was supplied, which was tea with far too much sugar and a bun that appeared to have an entire stick of butter slathered on it.

My friend told me, as we strolled through the faculty quarters noting all the new names on the gateposts, that she felt a sense of peace on campus. I don’t think there’s a better way to describe it.

Most of us are ambitious, working hard, getting places, doing things, always looking towards the next goal. It seems counter intuitive that being among classmates, several of whom are overachievers, would lead to a feeling of peace, but, for me, that’s precisely what happened. Maybe it’s because the reason we were there together wasn’t our achievements after the PGP. It was what we shared, and survived, during those two years.

Whatever the reason, that feeling of calmness, like it’s all right to stop, and breathe, and take a few moments for yourself, is the thing that makes IIM Ahmedabad home.

The faculty dinner that evening gave us a chance to catch up with the professors who’d taught us. Many of them, even some of those who’d since moved on, were present. I was pleasantly surprised by how many of them had personal memories of us. You’d expect that after a point every batch of students fades into a sea of faces demanding rems and complaining about subgrades, so it was nice to know we’d made an impression.

Being accompanied by a one-year-old meant I couldn’t go to the DJ event that followed. I’m sorry I missed it – I’m sure it was fun – but the time alone allowed me to think. Solitude informed my experience of IIMA to a large extent. No matter how many friends you have, no matter how many study groups you’re a part of or parties you go to, there are always moments when you’re alone. Those moments are equal parts peace and growth and reflection. That, ten years later, was still true.

The first event the next day, remarkably early, was the inauguration of the Faculty Club, to which part of our batch’s donation had been given.

I can say, without the risk of self-praise, that I’m proud of our batch donation. I was a very small part of it – since I’m following a policy of not naming anybody, I won’t, but the people who were in charge did a brilliant job, as did the organizers of the reunion itself.

I’m not quite sure, when I look back on it, how exactly I filled in the hours that day. There was a lot of going over old ground, literally and figuratively. Pushing the stroller around made me appreciate all the effort one of my classmates had put in to make the old campus accessible, something that I’d never really thought about before. We took pictures everywhere. My daughter did her first independent stair-climbing from the well to the upper level of CR8. I had a sandwich at CT and ice cream at the Amul café. We had the ten-year batch awards, which were as absurdly fun and full of in-jokes as anyone could have expected.

None of that is really important. This was the day when the most people were present, and that’s what matters. I had thought, before landing in Ahmedabad, that we would all have grown sufficiently unlike that it would be like a first meeting with a bunch of strangers.

I couldn’t have been more wrong. We had grown unlike, and perhaps in any other setting that would have made things difficult. But on the IIM Ahmedabad campus, strolling on the Tower Lawn or finding our seats in our old classrooms, it didn’t matter how unlike we’d grown. We weren’t, and couldn’t possibly be, strangers.

Our departure the next day wasn’t as sad as I’d expected.

Our last night in 2007, saying goodbye after our convocation, had been a mixture of excitement about what lay ahead and real regret for what we were leaving behind. Nothing in the world outside could ever provide the sense of peace and camaraderie that IIM Ahmedabad had. Where else could you be certain, at any time of the day or night, of finding one of your friends online on DBabble if you wanted to chat? Where else could a phone call have aloo parathas delivered to your room at three in the morning?

This time, sorry though I was to leave, I also felt like I’d gained something important. I’d met old friends again, and I’d realized how natural it felt to renew old bonds.

As I sit now, writing this two weeks later and wondering what the fifteen-year reunion will be like, I know I was right the first time. Some things never change. They may seem like they have, and they make look and feel different, but the truth is that a place you’ve once called home can never not be home, no matter how many years and miles have passed.