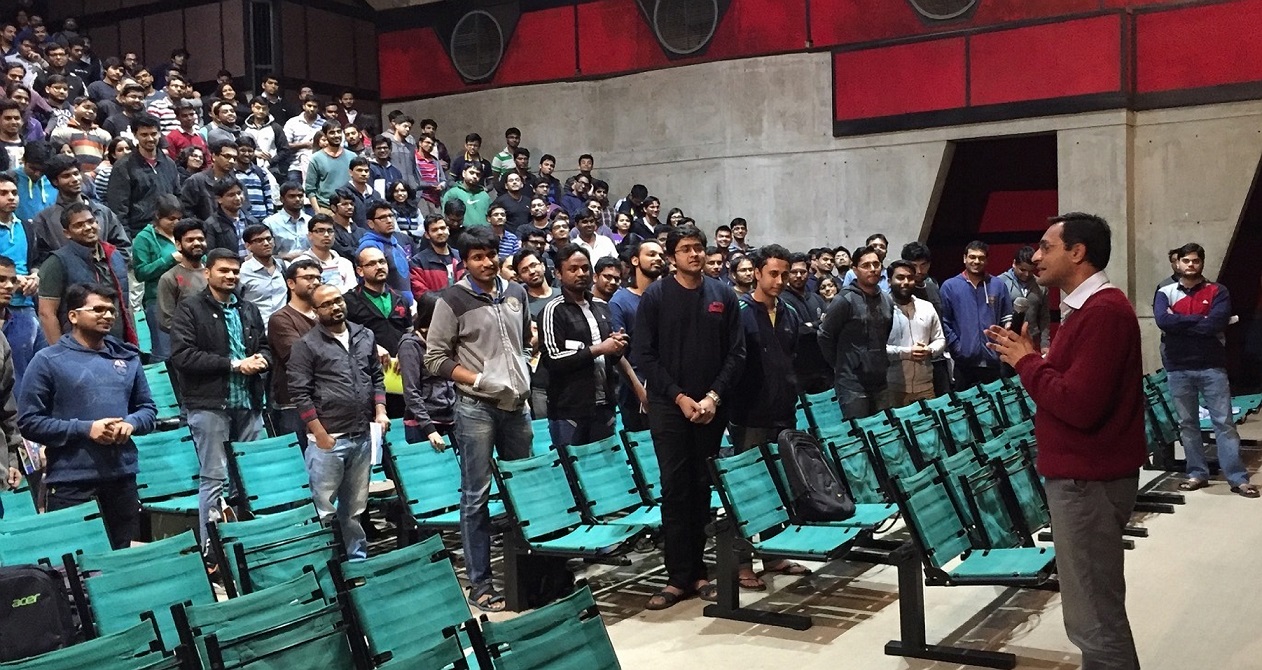 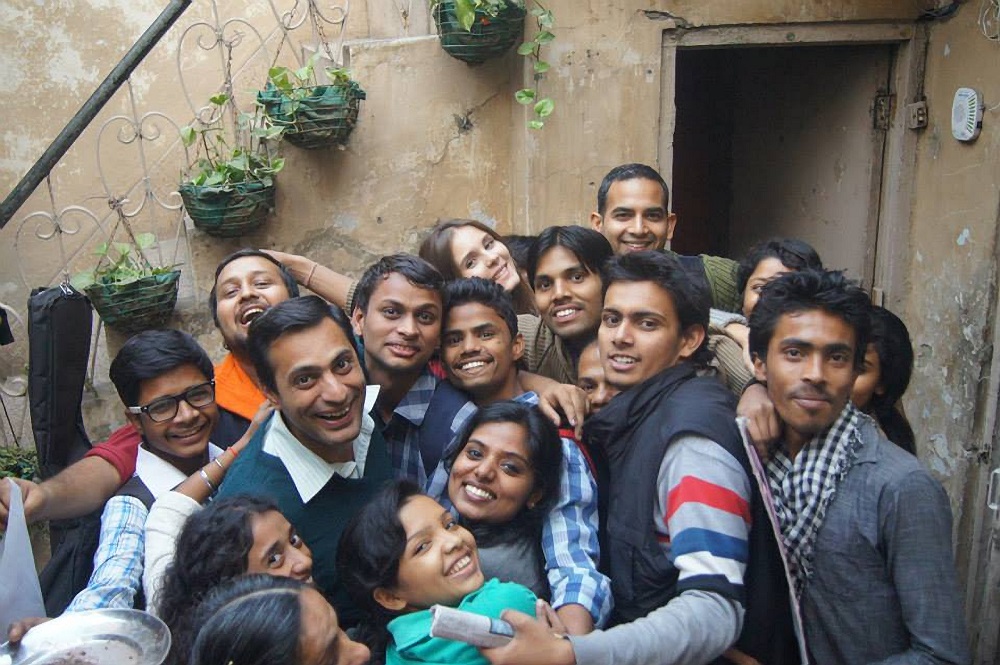 Mr. Ravi Gulati, Co-founder – Manzil Welfare Society is a renowned Indian social activist. He started his career in Canada, but returned back eight months later, to pursue a course in Environment Education from CEE, Ahmedabad. He later associated himself with Trees for Life (HIMCON) which is an NGO working with the remote Himalayan communities. Additionally, he is also involved with Jansamarth, an NGO working in the Himalayan range using micro-hydro plants as sustainable source of energy to generate electricity. He is also a board member of Pravah, a NGO involved in youth active citizenship promotion. Apart from social development and constant community engagement, his other interests include environment and alternative economics. Ravi Gulati is sitting on his laptop, making notes to prepare for a session with a group of young people later today. He is reading, typing and smiling to himself (he seems to have found something amusing today!).

It’s been 27 years since he graduated from IIMA (PGP-91), and this journey has developed into a life that has directly touched the lives of about 20,000 young people since. Over 20 of those now run their own enterprises addressing various social challenges and touching lives further.

Someone who has had the privilege of studying in leading academic institutions, has travelled to many parts of the world, has now come to be a source of inspiration and guidance for children and young adults from low-income families in Delhi. His ideas on education and life; his work within the public education system and his engagement with social entrepreneurs – how have these taken root and shaped across time? 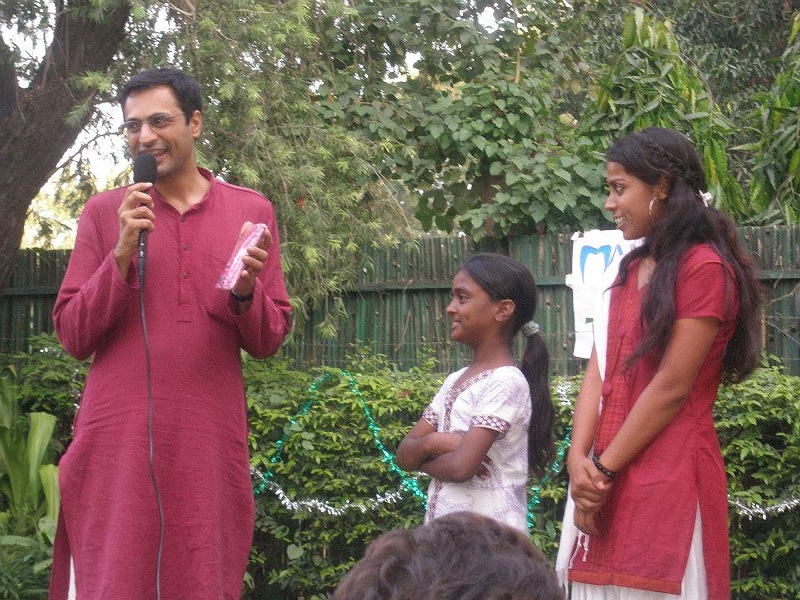 The Inflection Point Ravi’s insight into education and life came as early as his first year at IIMA – the summer of 1990. For his summer placement, unlike all his batch mates, he chose to work with a not-for-profit organization – a term not many were familiar with, including himself. Inspired and supported by Prof Anil Gupta, Ravi embarked on a journey to villages in the ghad region of Uttar Pradesh. That what seemed to be just an offbeat experience, while studying at IIMA, would one day define a large part of his identity, was unfathomable.

“The autonomy enjoyed by Professors at IIMA offers real and impactful learning exposures within the classroom”, says Ravi, “and the Professors bring themselves to the classroom in ways that the subject becomes an extension of who they are and their rich experiences”. This, on one hand, inspired Ravi to try something different for his summer placement; on the other hand, an irony awaited him at the village in UP.  The day he landed at this village near Saharanpur, members of the community obviously became very curious about this urban lad. He was faced with innocent inquiries and one such repeated conversation became the defining moment of his experience there. The villagers were amused at the fact that a young man who claims to be studying in Class 16 (as they figured) found it difficult to identify crops that any unlettered child in their village could easily do. This light moment was intense enough for Ravi to later reflect deeply and draw insights about how contextual education was and how the best possible exposure had its own limitations.

Having brought up by an inspiring mother who gave 30 years of her life in volunteering fulltime as a Special Educator, Ravi experienced growing up with a special elder sister Sonia who was raised in a way unlimited by her handicap, connecting joyfully and effortlessly with all kinds of people and always being independent and productive. Unknown to him, his world and ideas about work were being shaped differently. After graduating from IIMA, Ravi took off to Canada for his only ‘Job’ to date, on an 8-month assignment in the corporate sector. Only to later recognize the absurdity of having travelled halfway across the continent to explore different cultures and not having done so in his own country. On his return, many more diverse experiences greeted him in his backpacking adventure across India for four long years! The enigma of life chased him in his own house when he, after having travelled for almost half a decade, discovered about the existence of a low-income community within a stone’s throw distance from his plush neighbourhood in Khan Market. By then, he was already hit by the bug of engaging with people more than places. One thing led to another and Ravi found himself with a bunch of children, most of who attended local government schools, being equipped (poorly) to pass exams at school, but were certainly not being prepared for ‘exams’ that life had in store for them. His own experience as a student spoke to him about how easy it was to ‘cheat’ the system to score marks and not ‘LEARN’ and how ultimately we realized that we had cheated ourselves. Manzil was co-founded by Ravi and his mother – Indira Gulati, as a non-profit, facilitating the journey of self-discovery for teenagers and young adults who would otherwise be oblivious to the same. Nurturing individuals for their own unique talents and potential, in the company of other seekers, gave way to an experience where possibility of learning and co-learning can be maximized. Learning NOT restricted to age, classroom spaces, adults or subjects, at this unusual community of learners, students are teachers and teachers, students as they bring alive the belief that “Sharing is the best way of learning”. 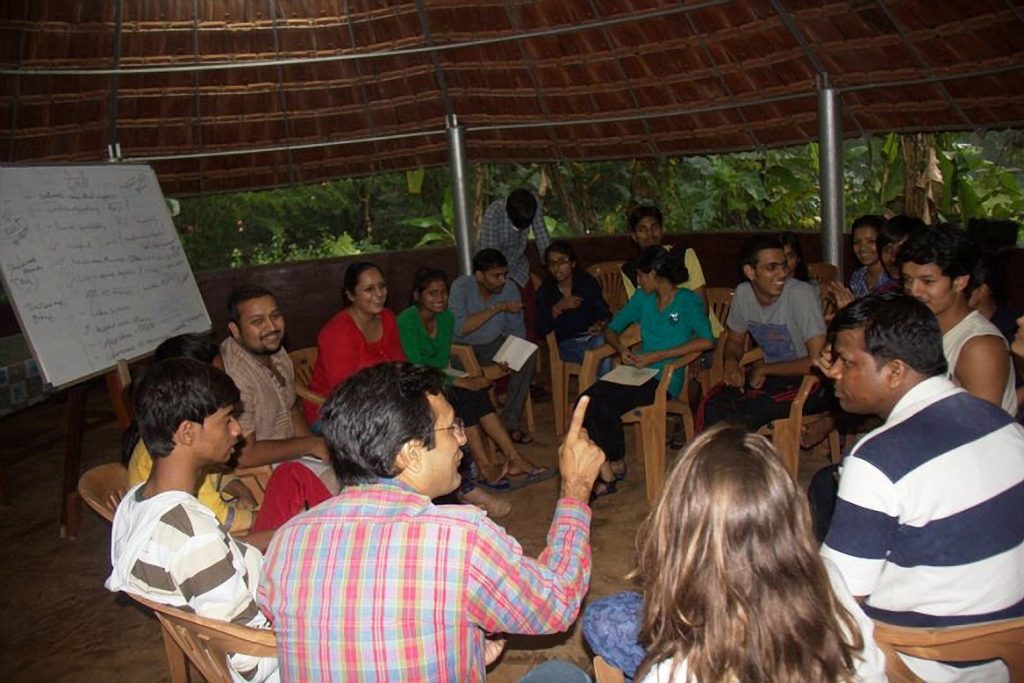 A school where students are teachers, and teachers are students Manzil’s core intent is to nurture individuals to become good human beings and create a community of passionate youth with a unique DNA. Youth who can not only hold multiple perspectives at the same time but also relate to others and act responsibly in their lives while pursuing their personal passions; skills that are of utmost relevance in the 21st century.

At Manzil, learning to lead is empirical hence it emerges more as a personal trait rather than positional status. Competencies like taking ownership, responsibility, building trust and trusting others, influencing without using authority and above all developing an entrepreneurial mindset are pivotal to their growth.

In a lot of ways, Manzil became an extension of Ravi and his experiences, just like the classes at IIMA.

A combination of the usual offerings and students’ asks has led to the emergence of classes like English, Maths, Science, Computers, Music, Dance, Theater, Filmmaking and Craft, impacting the lives of students in many ways. Confidence, audacity to dream, preparedness for a diversely characterized work life and a sense of empowered autonomy are some commonly visible traits among the students.

A large part of Manzil’s culture nurtures interrelationships in this common space rather than focusing on content. Unlike their academic institutions, students experience a community where they are under no threat of ridicule for not knowing something or making mistakes. Experiences, good or bad, are collectively and continually mined for learnings for life.  A contrasting experience where there are: 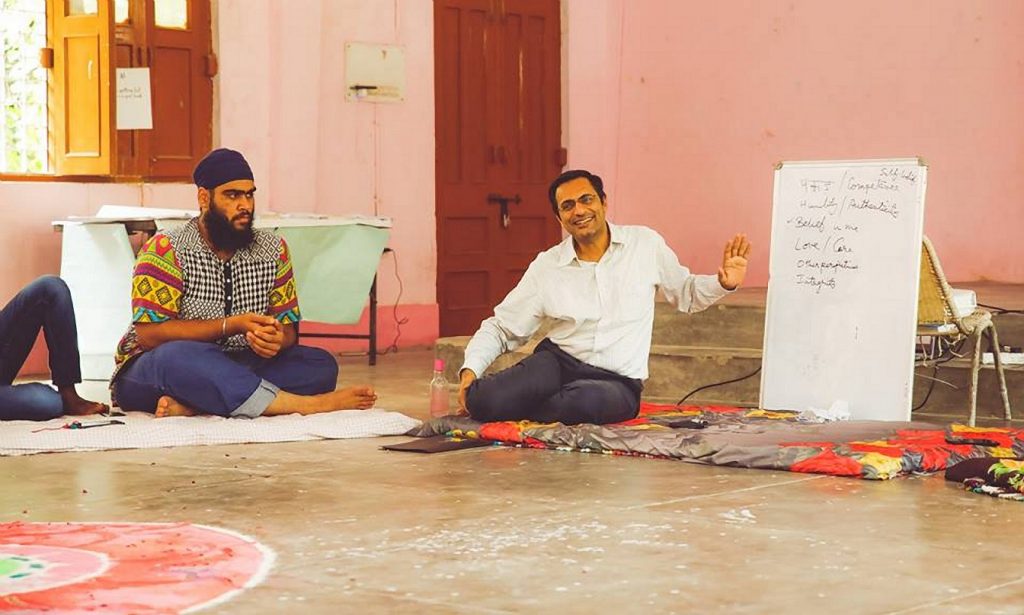 A Fertile Ground It was Shridhar Sethuram, Ravi’s batch mate from IIMA and an ardent long-time contributor to Manzil in myriad ways including financially, who first noticed the mushrooming of enterprises, spinning out of Manzil, and proposed to support them by initiating an Entrepreneurship Cell at Manzil. The Cell currently supports 7 enterprises started by Manzil youth. These include both for-profit and social enterprises by youth whose parents can barely make ends meet working informal, insecure jobs driving, gardening, or sometimes selling tea on the roadside. Stories of some of these enterprises span from successfully establishing an internationally recognized music band – Neeraj Arya’s Kabir Café that brings Kabir’s verses through contemporary music; to setting up of a Film Production House – FimArt by 6 young Manzilions who have serviced and impressed clients with over 100 films in just a year; a unique travel company by local youth – Delhi By Locals, that teaches us about balancing business and social impact by not only climbing the charts and becoming TOP 5 on TripAdvisor but also contributing 50% of their profits in developing youth in the community where they operate from (Learning By Locals); inspiring stories from young women running a Crafts Business – CraftKari; a passionate dancer providing a source of income to 40+ young dancers – Dance Kabila; to Manzil Mystics that offers a ‘Learning Through Music’ Program in over about 30 Government Schools across Delhi, offering life-skills and encouraging self-expression and a unique way to learn about menstrual health and hygiene to 3000+ children.

Full Circle – How educators learn After a decade and a half of working with children and young adults, Ravi was faced with his own contradiction about Learning. As a philosophy, he believed that there was NO age for learning and Life-Long Learning is imperative, something he would diligently practice and role model for his students. On the other hand, when he had the opportunity to engage, through another non-profit Creatnet Education, with Principals of Government Schools in Delhi, he had very little faith in their ability to change, to begin with.

Creatnet Education operates with a promise that a good school principal, is always doing a balancing act between how her performance is assessed and what would be of greatest value to her students, between immediate goals of showing learning through marks as a measure and the long-term purpose of kindling a life-long desire to learn in her students, between managing the infrastructure and administrative and other school processes, and inspiring and continually developing her teachers to in turn inspire children to learn and grow. This way of ‘Learning To Lead’ defined the core need of Creatnet’s work.

But how can that kind of learning happen? ‘Training’ principals was clearly not going to work and a demand for an ever-deepening self-awareness was recognized. This insight of his peer-mentor Darshan Bhat led to the evolution of a cascading model of learning in close-knit small peer groups for all 1000 Delhi Government school principals. Principals collectively learn to inspire their teachers to transform schools and improve the learning environment and outcomes for children coming to those schools. Creatnet’s work directly impacts lives of 1000 principals and indirectly impacts lives of 16 lakh children in Delhi. 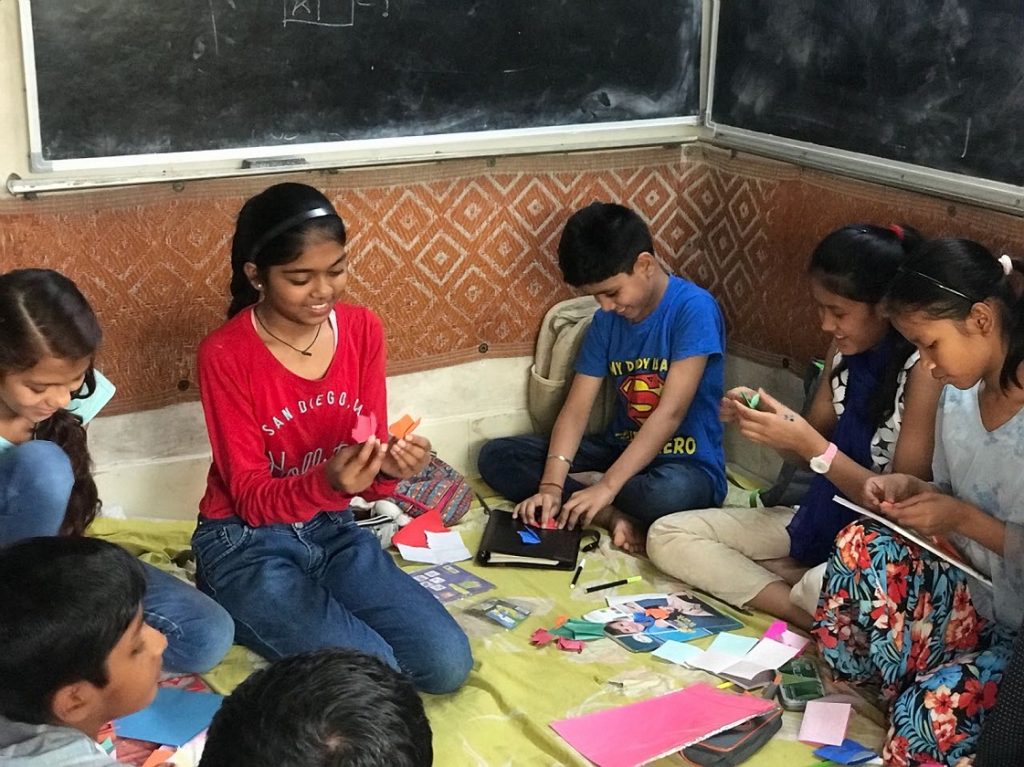 Collaborating to Co-Create Nurturing Communities Ravi’s unique idea about scale – he swears by the quote “You can sometimes count the number of seeds in an orange but you can never count the number of oranges in a seed” – allows him to not focus on expanding Manzil as an organization but supporting passionate youth and adults to scale the idea of deep learning in their respective contexts across the country. Whether it is a Headmaster of a government school or a Youth Leader, his motivation has been to empower and encourage their work. This has led him to be on the founding team of three other organizations in the social impact space outside the Manzil Ecosystem.

2) Safe In India – https://www.safeinindia.org/ Co-founded with two other batch-mates from IIMA, working with unfortunate victims of crush injuries in the auto manufacturing supply chain in Gurgaon-Manesar area to reduce the unacceptably high number of accidents, and for their health-care and compensations.

3) Creatnet Education – http://creatnet.org/ A collaborative network of school principals, relying on developing leadership from within, to augment learning and facilitating growth (Personal and Professional Development) for educators.

This diverse portfolio of work has given Ravi access to communities of passionate youth, seeking educators and youth in danger. His deep involvement with these communities enables him to derive profound fulfillment through influencing individuals towards positive change – something he learnt in theory at IIMA and is attempting to apply in real life. 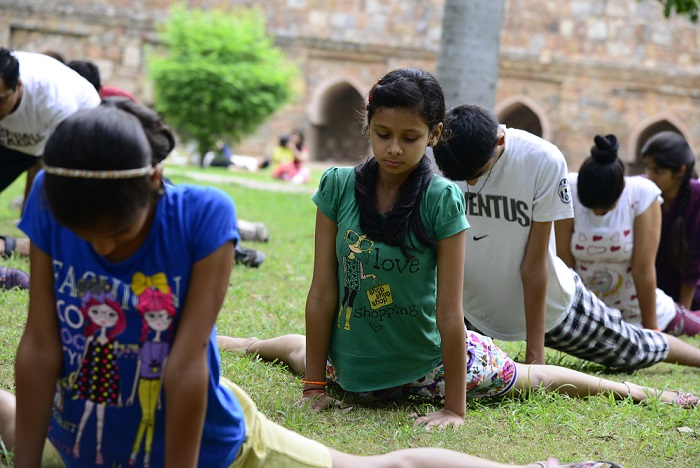 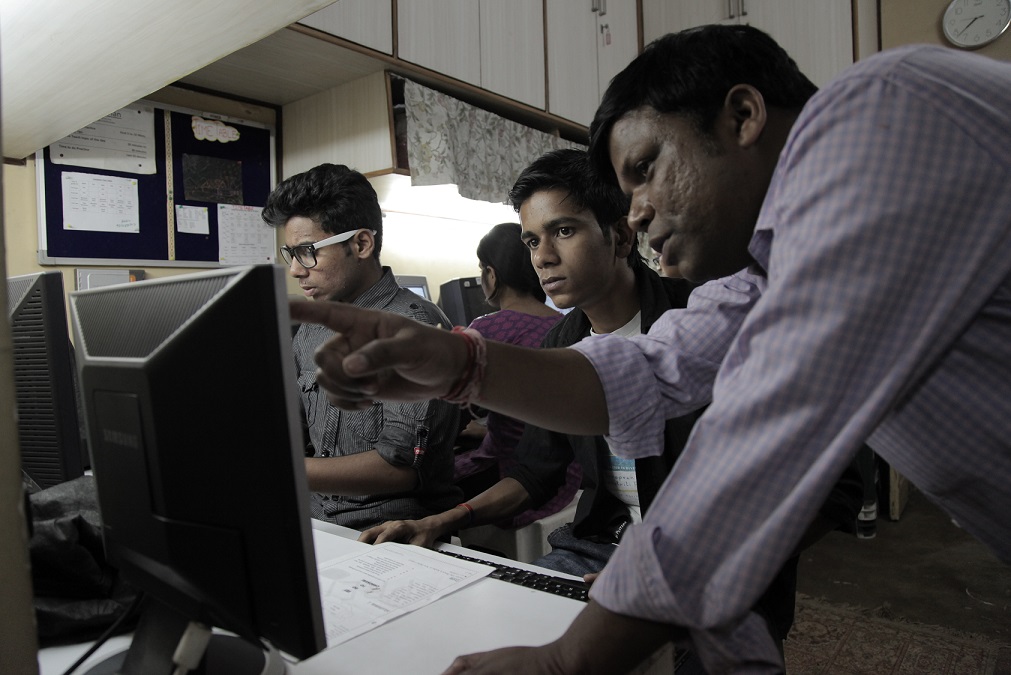