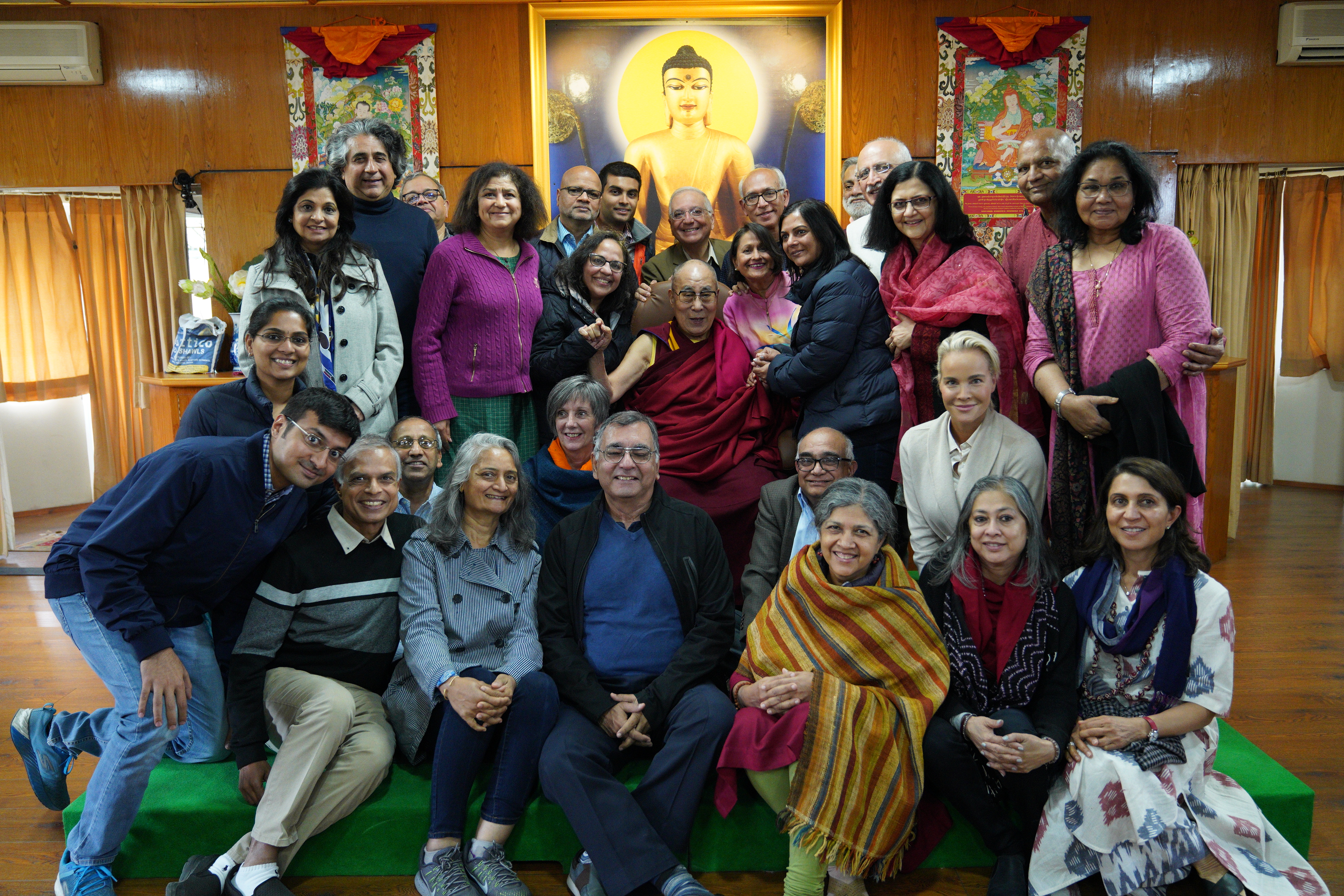 Narrative written by Mr Girish Moorthy and shared by Mr. Pradeep Mathur, on behalf of the 1979 batch

The Class of 1979 was fortunate to have an opportunity to meet His Holiness the 14th Dalai Lama of Tibet on Nov 7, 2019. This turned into a unique reunion of sorts, where almost a hundred of us including spouses and a few guests descended upon, or rather ascended to, the charming hill station of Dharamshala.

The organizers, Rajiv Dhar and Pradeep Mathur, did an exceptional and efficient job in planning the logistics, and the entire trip went off without a hitch. The highlights of the programme were the two sessions which are described below, along with a number of optional side activities, where people visited religious sites such as the Chinmay Tapovan, trekked, went sight-seeing, shopped at the Norbulingka, or just indulged in the much-missed bull sessions of yore.

Geshe Lhakdor on 8 Nov 2019, sharing insights on the book ‘Beyond Religion: Ethics for a Whole World’ by the 14th Dalai Lama 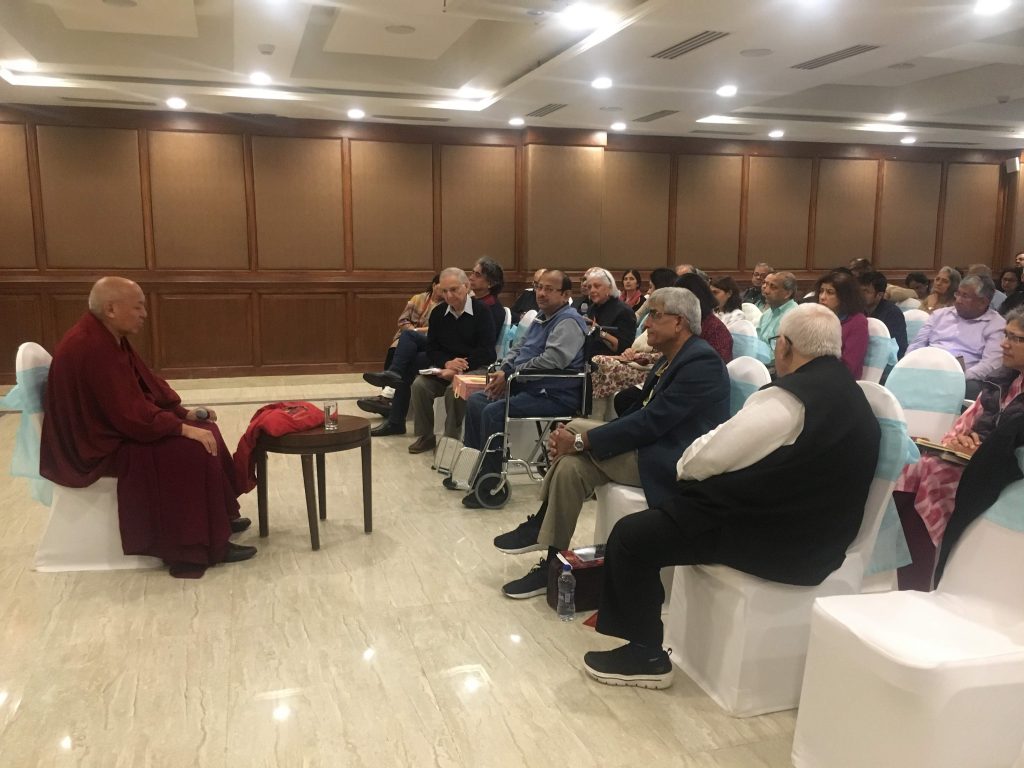 STARTING WITH A GOOD STAY: We stayed at The Pavilion, a modern hotel with a cricketing theme, replete with conference rooms having names such as mid-on and mid-off, and one that in addition to providing excellent accommodations and bountiful buffets, affords splendid views of the snow-capped Dhauladhar range, which dominate the landscape in the region.

EXPERIENCE AT McLEODGANJ: The morning of the 7th of November saw an early start to the day, where we made our way to McLeodganj, and then spent a couple of hours going through such elaborate security procedures that might have vexed even a hardened Israeli. For instance, I usually carry a stainless steel ball-point pen in my pocket. When it was my turn to be frisked, the officer meticulously dismantled it completely before examining it to be assured that it was just what it appeared to be: an innocuous writing instrument. This is not to be critical of the work done by the staff, but merely a sorry reflection of the times we live in.

MEETING HIS HOLINESS THE DALAI LAMA: The group waited patiently until His Holiness finally appeared. His is a most calming and uplifting presence, lighting up the room, and expectations were easily exceeded. Altogether he spent a little over an hour with us, during which he gave us a brief sermon, many points of which were covered in his latest book, ‘Beyond Religion: Ethics for a Whole World’, after which he opened it up to a number of diverse questions from the gallery, and sought to answer them as best he could. His grace, his sincerity, his humility, and above all, a mischievous twinkle in his eyes that still bespeak his child-like innocence and optimism made it an unforgettable experience. Below is a link to the content of the session from the local press, which is hard to improve upon, so I shall not even try! For those interested and who have time on their hands, there is a link to the video recording of the event, also pasted below.

Official YouTube video about the talk, titled ‘Talk about Secular Ethics to Managers and Entrepreneurs https://youtu.be/pKEy7polhKI

TEACHINGS FROM VENERABLE GESHE LHAKDOR: On the second day, we had a subsequent – and in my opinion more important – session with the Venerable Geshe Lhakdor. He has been an integral part of His Holiness’s inner circle, and is very familiar with his teachings. The group spent a half-day with him, where he expanded upon some of the important take-aways from the book, and also included a basic meditation exercise towards the end of the meeting. If you haven’t already read this book, I would strongly recommend it, for it is an eye-opener in which a spiritual leader not only provides a practical approach to happiness, and a way to deal with the misfortunes that life often brings, but also chalks out a blueprint to deal with internecine strife and global warming, both of which are important concerns today.

After introductions by Pradeep Mathur and Rajiv Dhar, VGL summarized the main messages in this book, stressing on the four commitments of the Dalai Lama: compassion, justice, discernment, and ethics. Each of these, of course, is represented by a chapter or two in the book with His Holiness’ special twist, where he argues about what is important in these attributes, and how one should approach them. At the end of the session, VGL was felicitated by a long-standing ovation, and Prof Gabriel Hawawini presented him with a shawl, which he gracefully and graciously accepted. 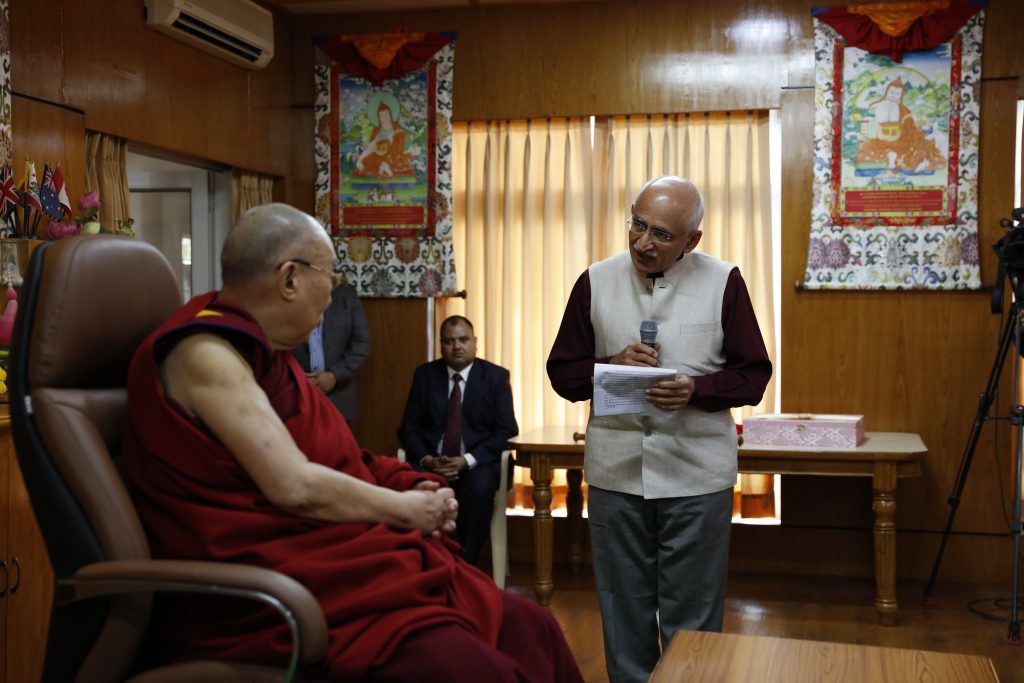 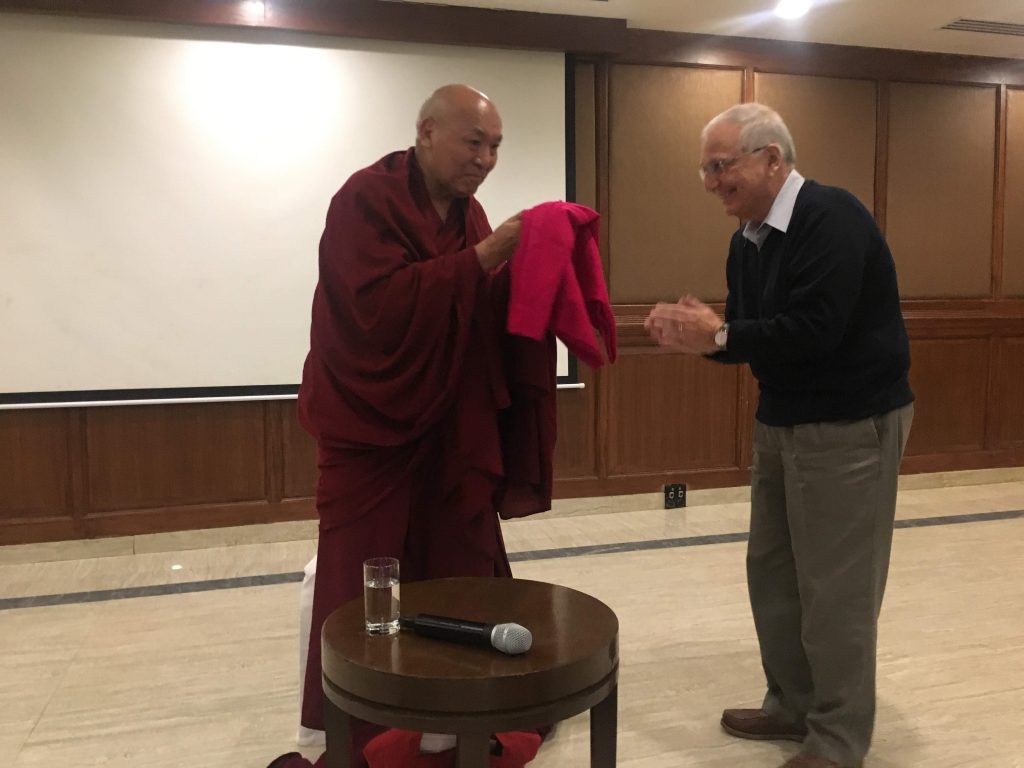 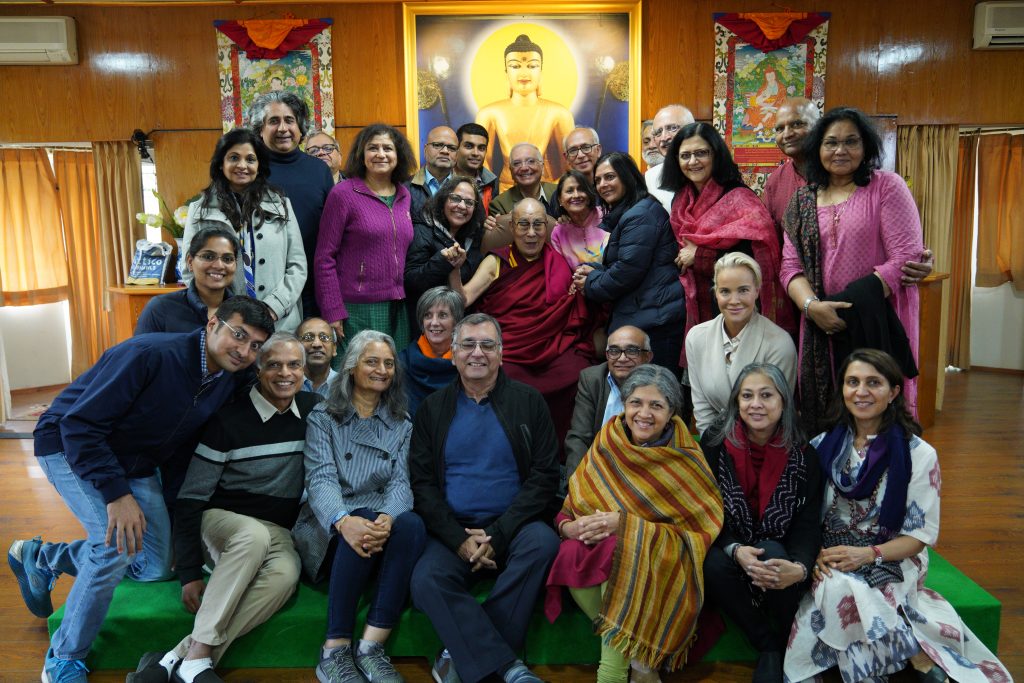 KEY LEARNINGS AND ENLIGHTENMENT: The following denote some of the main points and takeaways from the initial lecture and the lengthy Q&A session.

There is a lot of commonality between people: one should go away from “I/me/mine”. Broadening the outlook is essential to long-lasting happiness

Genuine compassion is one of the most important qualities that one must strive to have and is the foundation for well-being.

Discernment must be based on both “dil and dimaag”

On anger: It is bad for one’s looks, one’s blood pressure, one’s health. Anger also creates “distance” from the other, and prevents communication.

On the powers of meditation: It can generate psychic heat. Illustrated by the Tibetan monk, who transformed himself from a dissolute life to become strongly spiritual, and puzzled the Harvard scientists who experimented with him in a ‘cold room’.

On how to meditate: Ideally with eyes partly open, but it can be done with closed eyes, if it works for you. Start doing it for 2-3 minutes, and can gradually be increased.

Meditation helps to strengthen the positive, weaken the negative. It also generates long-lasting peace and happiness.

Related the parable of the Buddha and his 499 followers, amidst whom one was a terrorist intent upon killing the whole group. The Buddha had to kill him to save the remainder.

Many problems of today are on account of mental starvation: We feed the body but not the mind.

Repentance of wrong-doing helps to eliminate the negative emotion.

One judges oneself by what one can do, but others judge a person by what he does. Love is a quality that the blind can see and the deaf can hear.

In a rare moment, we felt the persecution of the Tibetans when he strayed from script and dwelt on the cruelty and oppression of the Chinese Government. He stated that the exiled are striving to maintain Tibetan culture: VGL is himself the Director of the Library of Tibetan Works and Archives. He said that the Chinese are digging their own grave, and said that there was a mismatch between the totalitarian rule that exists today, and their embracing of a capitalist (free market) economy. He stated that it was curious that many Muslim countries tacitly supported the suffering of a million Muslim inhabitants of Xinjiang.

ENDINGS, BEGINNINGS: The last night included a pre-dinner karaoke session, thoughtfully sponsored by Anand Ladsariya, which gave those with musical talents an opportunity to show-case them, or simply have fun. This mini-event was over all too quickly, as the next breakfast saw the hugs and fond farewells, and plans to meet again. 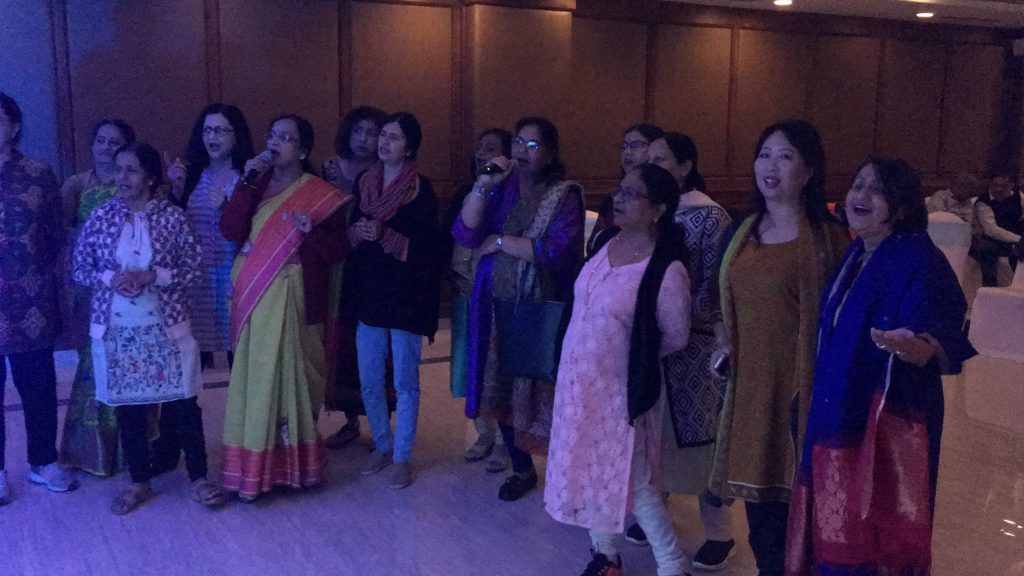 A take from the fun karaoke evening 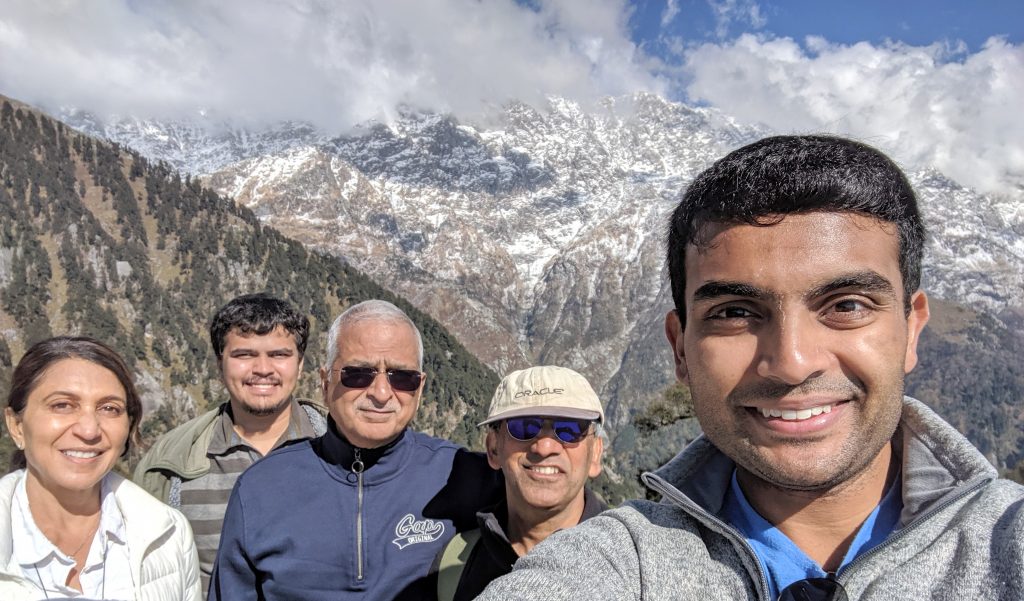 Glimpse from the treks that the batchmates undertook 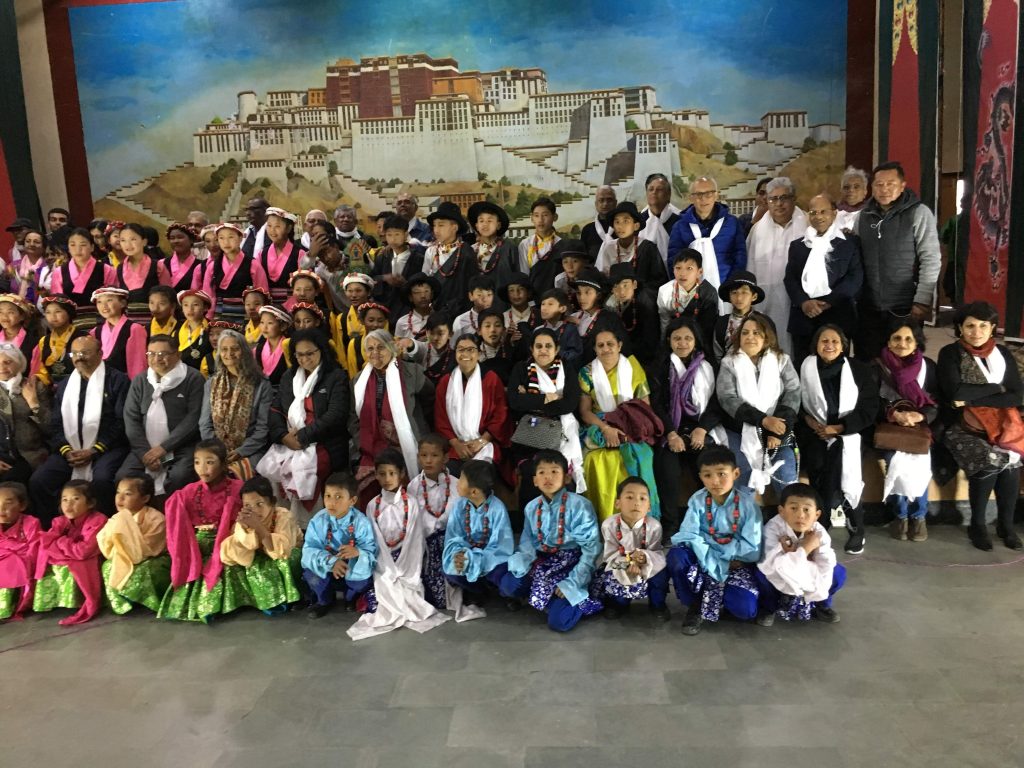