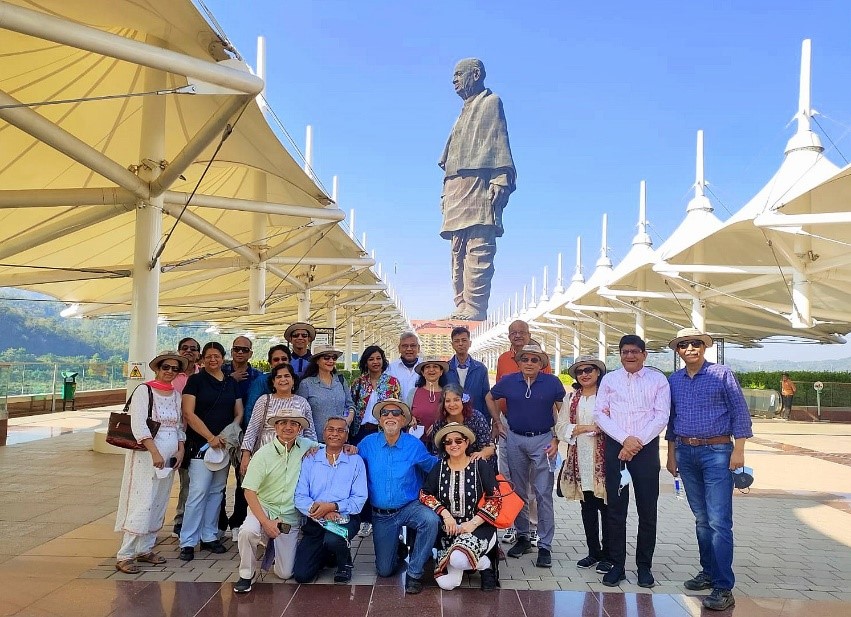 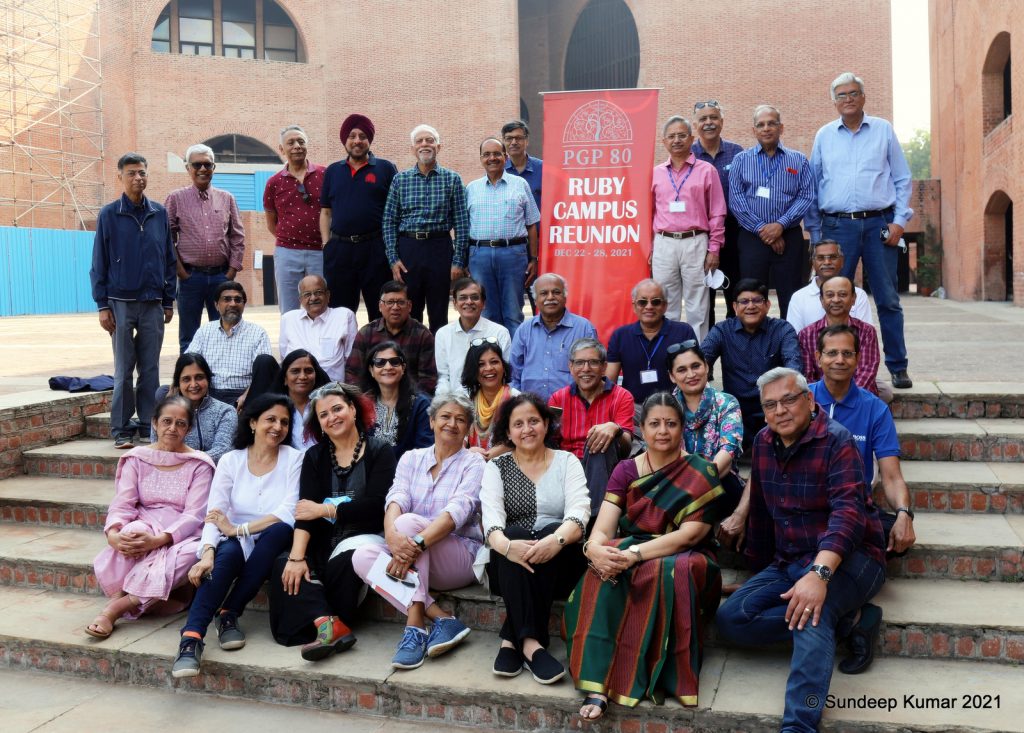 In 2019 at our reunion in Kaziranga, chatting over beers at the Camp Nikori eco-campsite, we decided to meet again in the Andamans the very next year for our Ruby (40) Reunion.  Thanks to the efforts of Sundeep Kumar, this memorable Ruby Reunion did happen in February 2020, a few months short of 40 years from our passing out and just before Covid turned our lives upside down, forcing us to abandon the ‘Official’ PGP80 Ruby Reunion planned for Dec 2020 on campus. But, rather than not having the reunion at all, we decided to hold it in December 2021 instead.

STATUE OF UNITY (SOU) AT KEVADIYA (DEC 22-24) Twenty-two persons assembled at Ahmedabad Airport on December 22, 2021 before starting our exciting journey towards the SOU with the usual gup-shup and catching-up, halting at the Jagdish Food Zone (near Vadodara) for a traditional lunch. Thence, we proceeded to Narmada Tent City 2, an environment-friendly resort near SOU, where we spent the next two nights. On the way, thanks to the VIP pass arranged by the ever-resourceful Sundeep, we had our first close glimpse of the awesome and majestic monument. 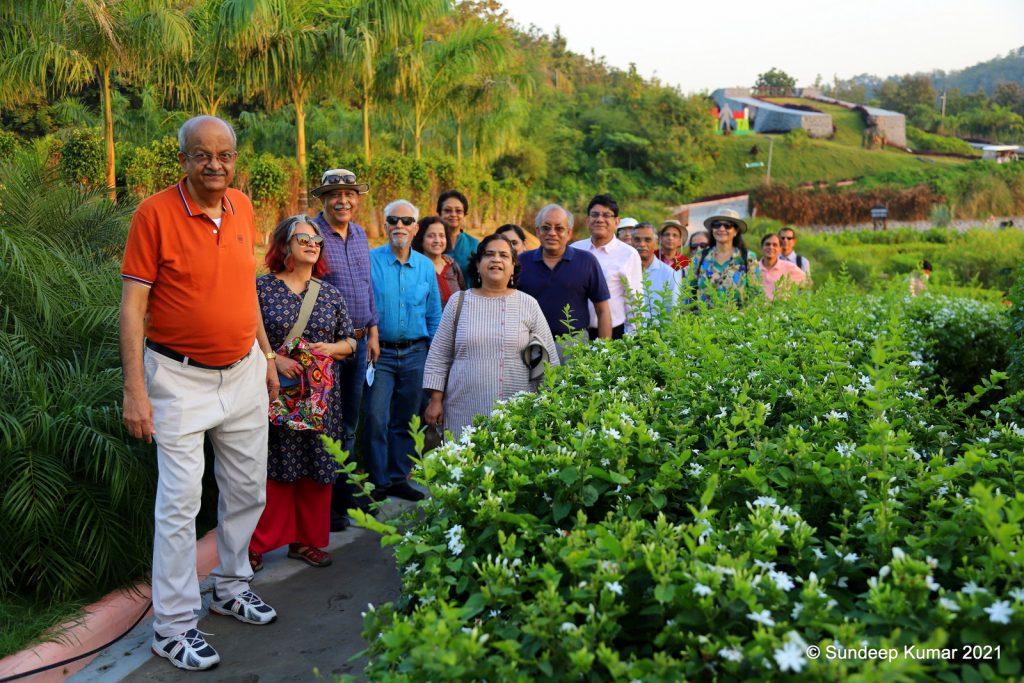 The evening saw us on the Narmada River for a Dinner Cruise. Music and dance added to the enjoyment, with Arun and others displaying gay abandon on the dance floor. The surrounding views and lighting against a beautiful moonrise made the evening magical.

After a restful night, some went for a morning walk along the main Narmada Canal and following breakfast we all proceeded to the main attraction – the 182m statue of Sardar Patel, tallest in the world. Built on ‘Sadhu Bet’ a river island, it faces his dream project – the Sardar Sarovar Dam. Like excited children, we crossed the bridge to reach this impressive monument, taking photos on the way, totally overawed by its size and features.

A high-speed lift took us 153m to the viewing gallery in barely 30 seconds. We were all astonished by the statue’s brilliant engineering and design.  After seeing the world-class exhibition below, we climbed to the base of the statue. It was a humbling experience to be at the feet of the world’s tallest statue.

The SOU area boasts many attractions but a few we visited were the pan-India Handicrafts Shopping Centre, the ‘Nutrition Park’ on a train ride and the 17-acre Arogya Van which showcases Indian medicinal plants and health-related landscapes. The highlight there was a sumptuous high tea served by a tribal women’s self-help group. Later in the evening, we watched the must-see Laser Show, which uses the mammoth Statue as a canvas to portray the journey of Sardar Patel, using a dazzling mixture of laser lights, sound, graphics and storytelling. It was a masterly presentation that inspired pride in us as Indians.

The next morning concluded our well-arranged and satisfying trip of SOU and we began our journey towards IIMA Campus for the second leg of our Ruby Reunion. 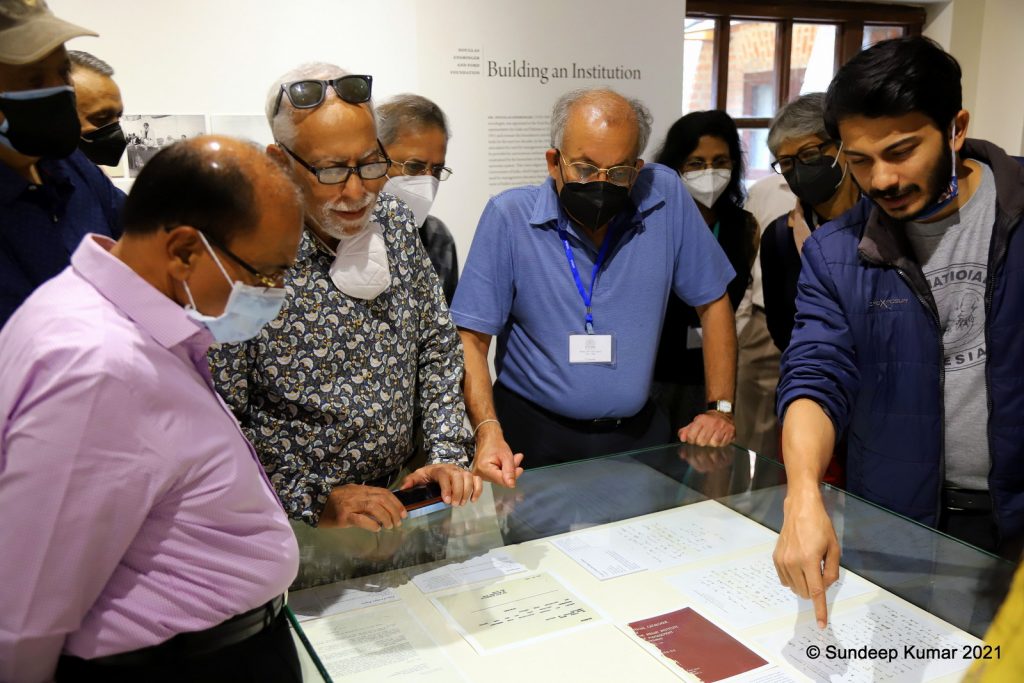 REUNION AT THE CAMPUS (DEC 26-28) The second segment kicked off on Dec 24th and saw 24 batchmates (13 with spouses) gather for lunch at the IMDC dining hall. The programme commenced in the afternoon with a visit to the refurbished library and a look at the newly opened IIMA Archives Gallery housed in D15. Prof. Chinmay Tumbe and his team walked us down the memory lane in a way that many of us had never experienced. We had a light tea in our old mess, reconnecting with past memories, sights, and aromas. The evening was when everyone really came together at the Great Ahmedabad Street Food Festival, beautifully and sumptuously organized by batchmate Himal Parikh on the CR2 lawns of IMDC. It was nostalgia for the taste buds as people indulged in old time classics – bread-omelette, pao-bhaji, bun maska, aloo-tikki et al., while mingling in a joyous Christmas Eve atmosphere. We were blessed to have Prof Abhinandan Jain, and Prof G Raghuram join us, along with Nayan Parikh (PGP 1981) and his daughter Tanya.

The second day started with an activity titled ‘Down Memory Lane’ designed and conducted by Sundeep Kumar. It saw groups of us racing to locate memorable places from our days such as the badminton court, DJ Club, the erstwhile Pantry, based on some interesting cryptic clues. A sample – “when all was done and said, the coolest valley was red” (Ans: Vadilal Ice Cream Parlour).

After this hectic and fun morning, we took our customary batch picture on the steps of LKP and headed for mid-morning tea with Prof. Errol D’Souza (Director IIMA), Prof. Saral Mukherjee (Dean, Alumni & External Relationships), and Ms. Chhavi Moodgal (CEO of the newly formed IIMA Endowment Fund), before a sit-down with them. We were especially grateful to the Director for taking time away from his family on Christmas.

Errol gave us an overview of the new infrastructural developments, taking pains to explain the challenges and dilemmas, particularly with respect to refurbishing the old campus. How to preserve IIMA’s architectural heritage without compromising on safety? Errol, Saral and Chhavi gave an inspiring overview of the many developments and opportunities for Alumni to give back: Centres of Excellence, Knowledge Creation and Dissemination, Social Entrepreneurship, Dual Degrees, Exchange programmes and the Endowment Fund.

After a delicious Christmas lunch, we got together to brainstorm on what the batch could do for or with their alma mater (while the spouses went shopping to Sanskruti and Bhandej). Before the discussions, Arun shared a video from Prof. Meenakshi Mallya, who resides at the Hari Krishna Temple in Pune. In her message to us, her “children”, she emphasized the values of service, compassion, and setting an example.

Our discussions used the powerful Open Space Technology (OST) method under the stewardship of Arun. Initial ideas were thrown up and self-organizing break-away groups were created to further deliberate upon them, further creating action plans, which in turn have been shared with Errol, Saral, and Chhavi. It is amazing what just one batch can potentially do if we facilitate connection, conversation, and co-creation!

Christmas evening was again reserved for another culinary trip down memory lane as we descended on one of our old haunts – Vishala. As always, the food and service were delightful. During our days when we traveled there, it felt like an outing to a faraway village. Today, it was disconcerting to see it surrounded by multi-storied buildings, in the heart of a sprawling Ahmedabad.

On the morning of Dec 26, many said their goodbyes after a lovely time together. Some of us walked across to the Blind People’s Association complex for a visit organized by Himal in coordination with Dr. Bhushan Punani (PGP 1979) who has dedicated his life to serving the visually impaired. After a particularly good poha breakfast, we were taken around. The highlight was the ‘Vision in the Dark’ experience which occurs in pitch-black darkness and sensitizes one to how the world feels to the blind, while showing us just how much we can do with our other senses. It was a real eye-opener! 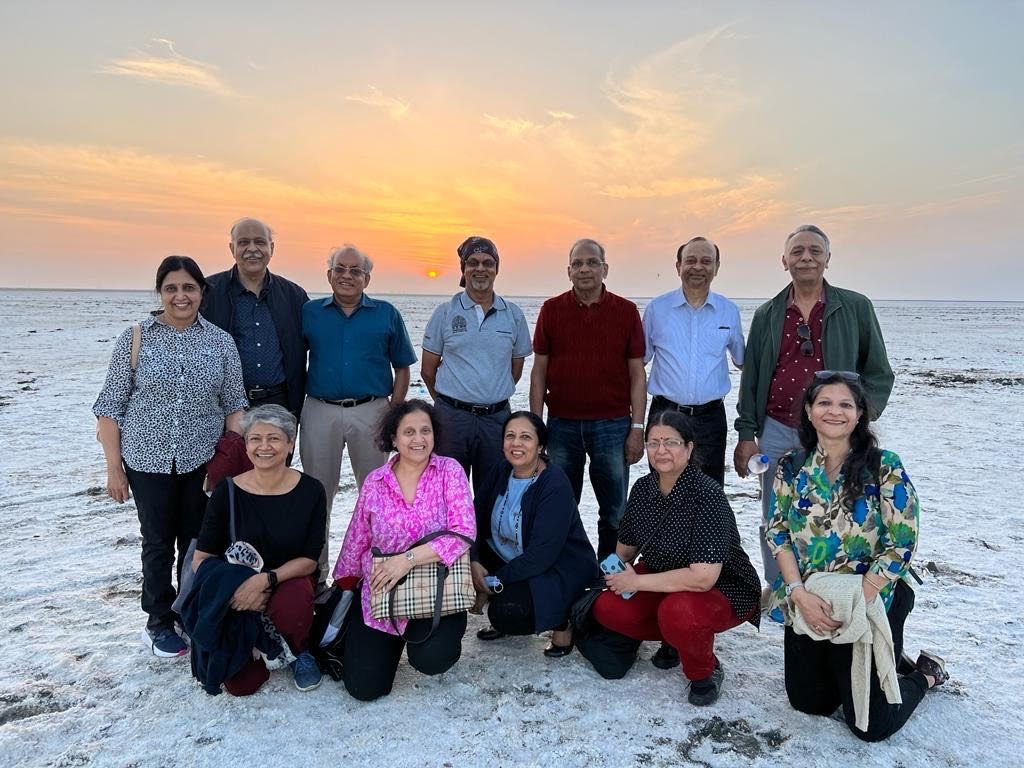 RANN OF KUTCH (DEC 26-28) Despite the shrinking numbers on this leg (only 6 couples), it was indeed an exhilarating experience.

After a 6 am departure from the campus, the 11-hour journey to the Rann was full of unexpected excitement, with a tyre burst halfway through, Ravi trying to use all his Fenner contacts to arrange a spare tyre (being a Sunday the shops were closed) and skipping a Fine Dine restaurant (originally planned for lunch) for a hastily organised Dhaba lunch. Inventiveness was on display in true WIMWI style. Of course, conspiracy theories abounded, as the tyre conveniently burst right next to a tyre repair shop and a Dhabha.

Finally, we reached the White Rann Resort, with literally minutes to spare to catch the sunset over the salty plain. Given the hassles of the day, the sunset experience was perhaps a little underwhelming, but was more than made up for by the sunrise the next morning. It appeared as if we were standing on a vast expanse of snow at the North Pole.

Daytime passed with the favorite activity of the ladies – shopping. When the vendor promised to ship the stuff to our destinations, the excitement went up many notches. Of course, Raghavan is still hoping that I will hand over the keys to my Merc in return for his agreeing to make the shopping payment from his google pay account.

The evening trip to Kala Dungar was again eventful with the hotel van’s windows coming off on the return trip and all of us hanging on for dear life till we reached the resort.

At night, we were subjected to a musical blast (in the name of entertainment) whether we wanted it or not!  KMS threatened to call the police (which had no impact on the management), ending another eventful day.

On the last day, we departed in two groups with the Bangalore gang going to Rajkot airport and the remaining three couples going to Ahmedabad, sprawled in a 45-seater bus.

Looking back on the Ruby Reunion, we all had a very fulfilling time. We wished more batchmates and their spouses had joined in. The team of Sundeep, Vinod, Himal, Gopalan and Tushar did an awesome job of organising and conducting it. Sundeep deserves special gratitude and many of us feel he can easily set up shop as a Master Reunion Designer!

Friends, who could not attend, do join us the next time. We promise it will be as fulfilling and fun as this one and the ones before this.