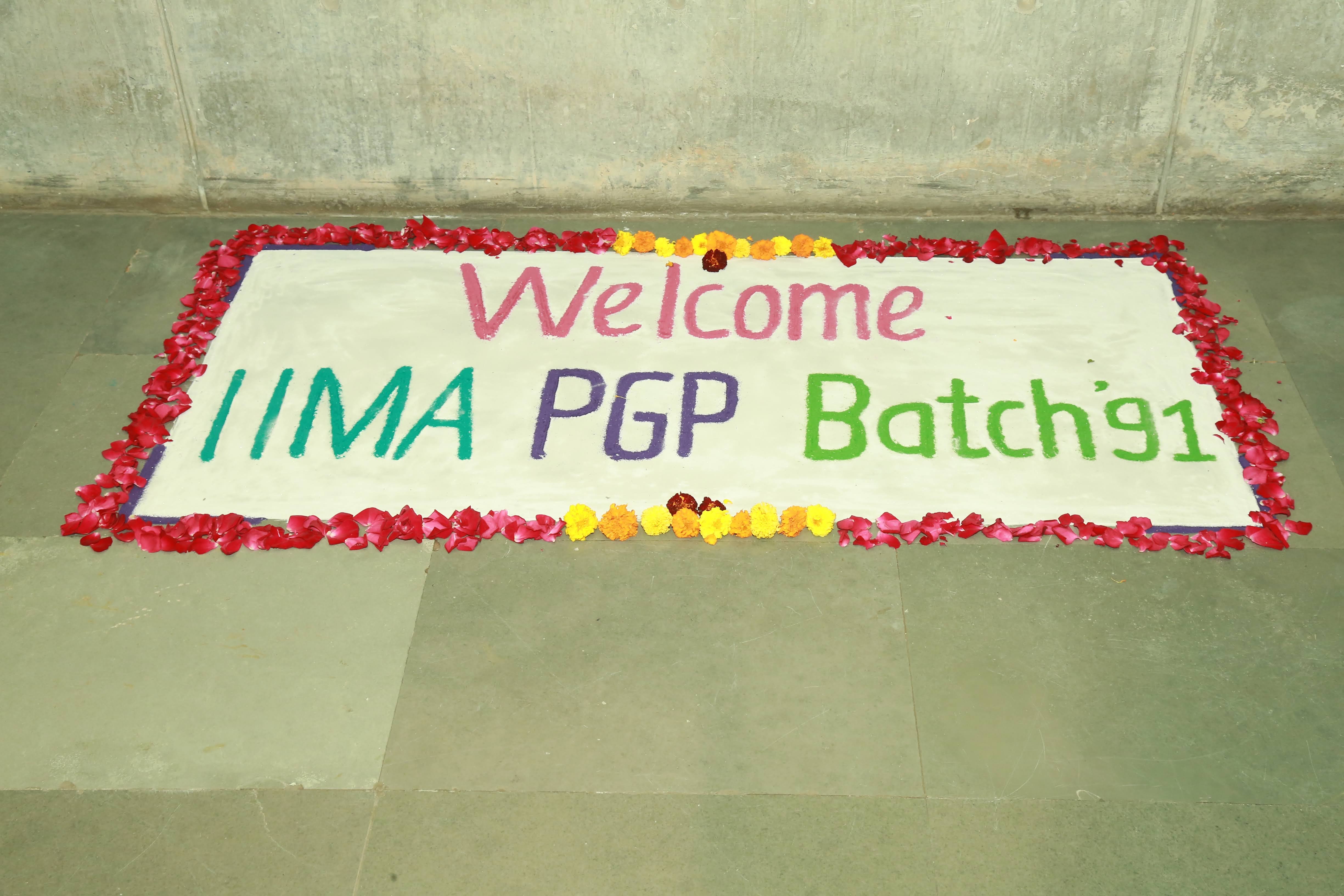 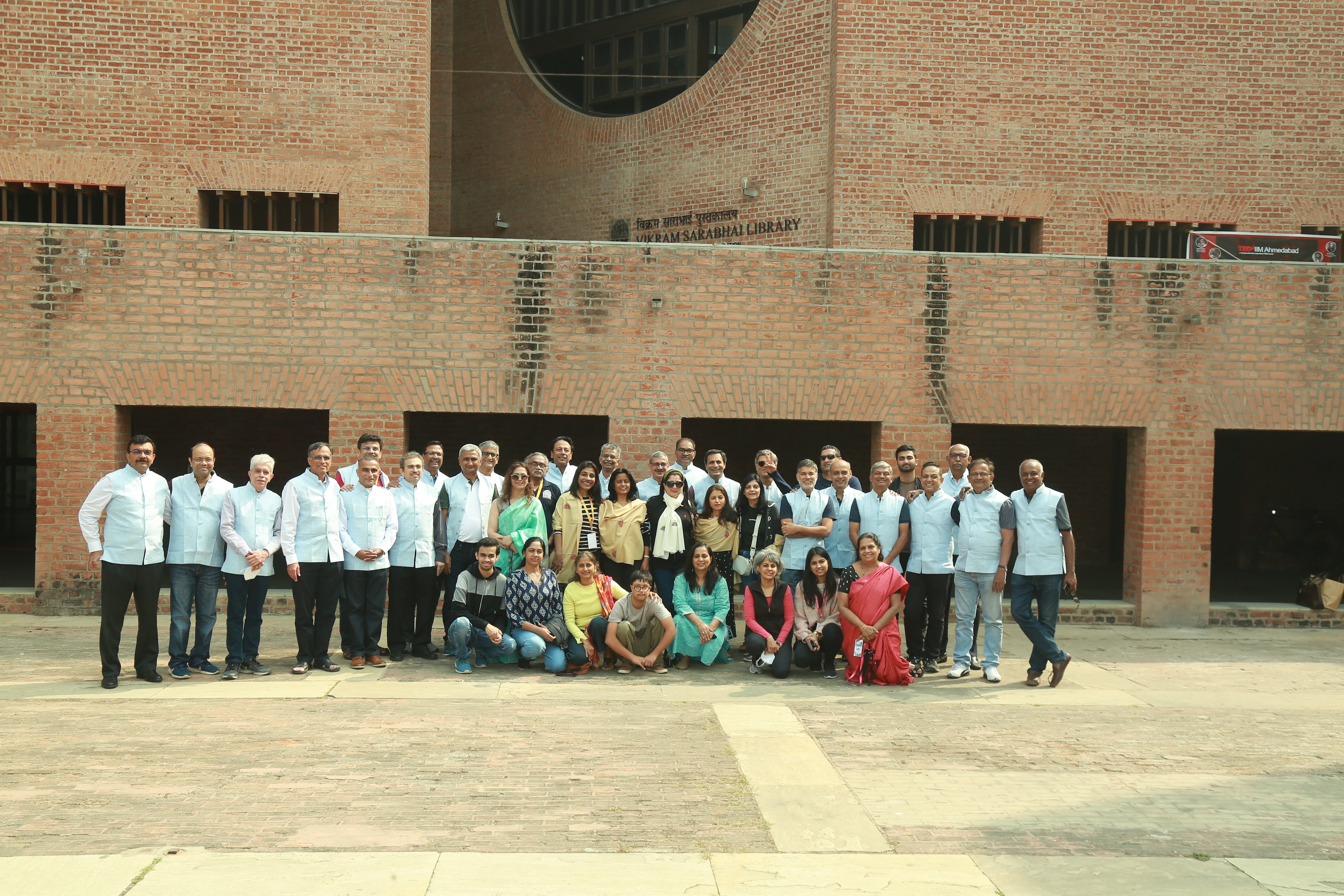 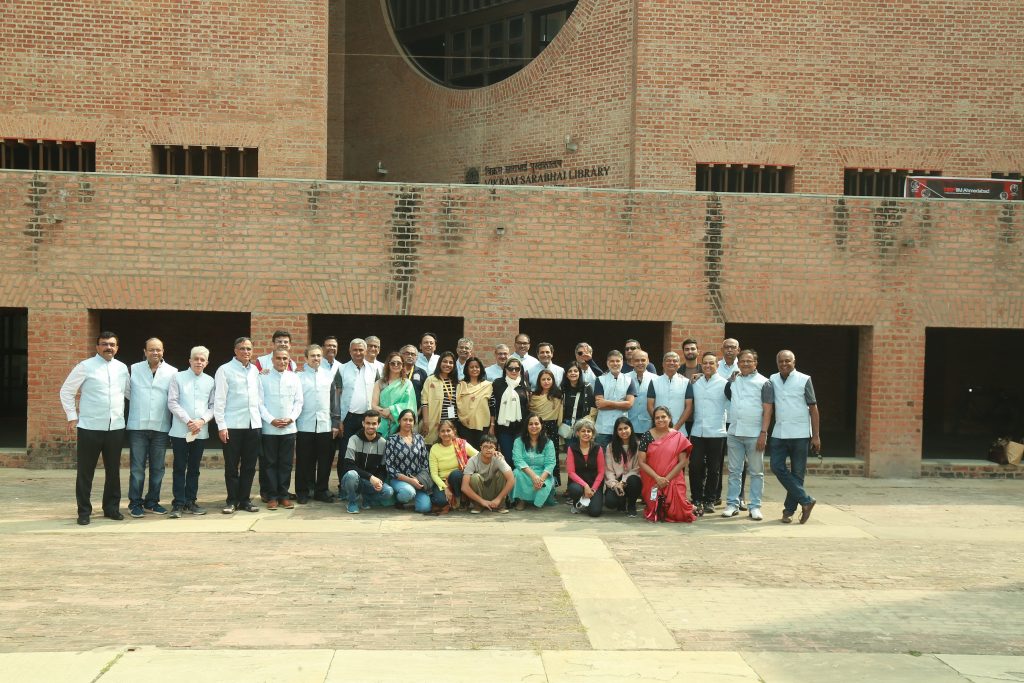 It all started back in May, when Sampat proactively got in touch with the alumni office, booked us dates in the middle of December for our 30th reunion, and in his inimitable style said “Aayyy. Let’s organise the reunion!”. And of course, in true MBA style, we started organising. We set up a reunion board, a reunion committee, dorm representatives committee, music committee, joos committee, a committee to form committees- all with their own WhatsApp groups, and all busily planning. Woe betide the poor fellow who was on multiple committees – he probably had his phone pinging at all odd hours or day and night with various messages!

The first decision in front of us was should we do this online or offline? The batch of 1990 had done a very good show online at the end of 2020, so online seemed feasible, and also doable. But Sampat stuck his chin out and said “either we do this in person on campus, or not at all”. After much debate, we agreed that we will do both online and in person. Of course, this had never been done before, so the question was how? But where there is a will, there is a way, and thanks to our event organisers Dipesh and Dhara of Markcom, it seemed we could do it. We decided that we’re going to try and involve the online guys as much as we can. So the first thing we did was to send everyone from Kannan in Australia to Kanth in Nigeria to all the folks in California a fantastic waistcoat or stole (made by a group of women entrepreneurs that Monika mentors).

For the logo, who else could we turn to but Moulee and Flo? They came up with a superb tag line – “Cool S**t Happens With The Batch of 91”, and of course you know what the logo was! Moulee and Flo also came up with some fantastic lyrics for the batch song. 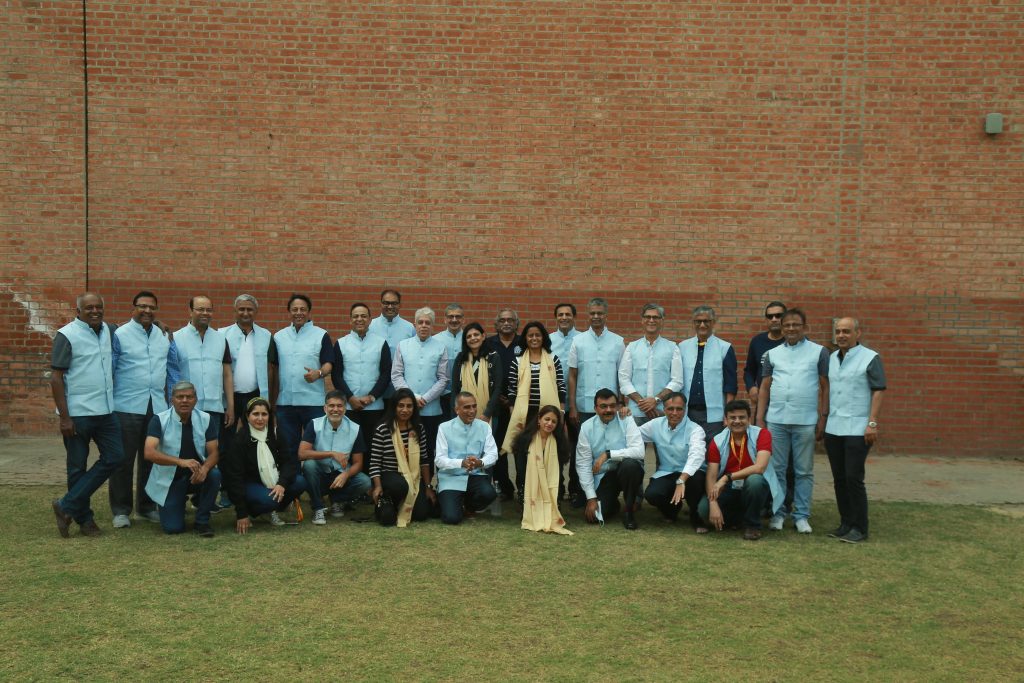 We seemed to be moving along quite nicely till the end of November when Omicron struck. Suddenly all the guys coming from places like the UK, US and Singapore would have to go through lengthy quarantines, and overnight our online list lengthened as the in-person list shortened! We had the usual discussions of should we/should we not meet in person, or should we move the whole thing online, and then we decided that we were going ahead with the offline/online hybrid anyway – in hindsight a terrific decision!

We turned up on campus on December 16, and even though we were largely in the new campus (the old campus was partly closed due to renovation, and partly due to PGP I exams), just being on campus was magical. The years just fell away, as they always do when we meet there, and we were the same mad bunch from 1991 – somewhat balder/greyer (at least the men!), but still the same bunch. Some of the spouses and families came along, and they watched in amusement as their parents and spouses showed them a side that they may not have known existed at all!

Our agenda was a mix of formal sessions and enough free time for people to catch up. We had three evenings, and we were very clear what we were going to do in those evenings – play music and have fun! The first evening was for our own batch singers; on the second evening we had a wonderful show from Manzil Mystics – a band that has emerged from Ravi Gulati’s stellar work with less-advantaged children in Delhi over the last 25 years, and on the third evening we had a professional band from Mumbai. Or course our very own Akhouri, who is as good as any of the professionals, sang along with them and took us back to those wonderful music sessions from back when we were at IIMA! 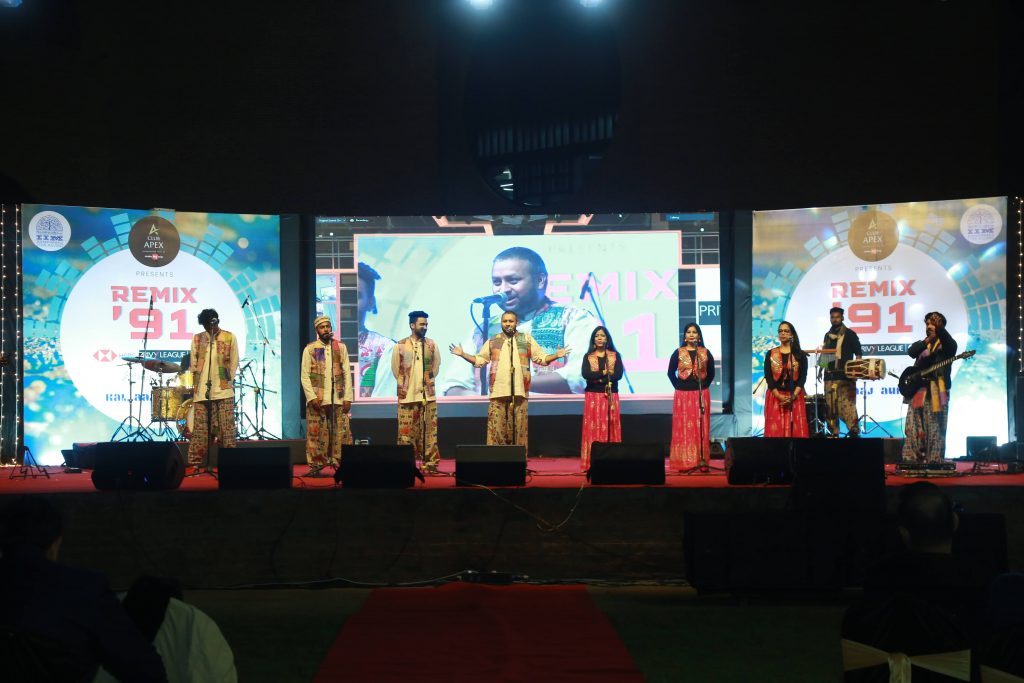 While we had great fun, probably the best part of it was how we were able to integrate the online and in-person fun. At the outset, we divided the batch into six geographical regions (US, UK/Middle East, Singapore/Asia, Mumbai, Delhi, and South India), and got each location to make a video introducing batchmates’ families and their special talents. This set the tempo going early. Some solid work here by Rik, Nagar, Sonia, Sandy, Kalpana. God, Priti, Akhouri. RoyC, Lala and Namrata! It was fantastic to see all the videos in our musical evenings, and this really brought everyone together! Another fantastic integration tool was our digital yearbook. Dixie created this online yearbook, where each batch member sent us photos of themselves, their family, and a short writeup of where they are and what they do. We now have a really well laid out, colourful, and very very precious online document with everyone as they look now, with spouses, kids, pets – the lot!

Technology also ensured that all the folks who joined online were able to take part in every session, and felt involved and a part of things. IIMA is now set up for online interactions and we made full use of these facilities. It was fantastic to see everyone on Zoom, and have conversations with them as if they were with us on campus! Yours truly took up the mantle to organize many of the formal sessions and also integrate the online/offline interactions. Once the tone was set in the early sessions, it was all smooth going from then on. For other batches reading this and wondering about organising hybrid reunions – highly recommended, and if you want to do this, get in touch with us and we’ll tell you how!

We had two panel discussions for the current PGPs – one with male batchmates, and one with female batchmates, around alternative career paths, and career advice in general. It was fantastic to see over 50 PGPs participate in each panel, despite the fact that this was exam time! We also had a wonderful session where each one of us took the group through how our life journey had been over the last 30 years, and where this has got us. This was magical, and it was planned for 90 minutes, but went on for four hours – ending close to midnight on the first evening. We also had a fantastic session with Mike Brearley (yes, that Mike Brearley!) where he regaled us with cricket anecdotes, and gave us general fundae of life.

We’re at the stage of life where retirement (or at least working less) looms large, and we wanted to hear each other’s thoughts on that. Of course, some of us have always worked less, so for us it was now about working even less!! This was a great session where we came to the conclusion that retirement is purely a state of mind, and not one for us!

Vags came online from Mumbai; with his salt and pepper beard. He’s beginning to look like AK Jain, even though he talks like Warren Buffet! He gave us a great session on stock market investing, complete with how to choose stocks, and the multi-baggers of tomorrow. When we meet five years from now, we’ll need to tote up the profit the batch has made!

We’re a very socially oriented batch (the institute tells us the most socially oriented, but I suspect they’re just being nice!) with a number of social entrepreneurs and some serious impact on the ground. When we met for our 25th year reunion, we had pledged time and money to make an impact through a few chosen avenues. This time we celebrated what we’d achieved in the last five years, and renewed our commitment to doing even more.

What reunion is complete without remembering those who made you who you are? And so one of the core events of our reunion was the felicitation of faculty. A surprising number of faculty have retired in Ahmedabad, so we could meet them in person, but since we were also online, we could invite anyone from across the country! And so it was that we had Profs Anil Gupta, A.K. Jain, JR Varma, G Raghuram, KV Ramani, BH Jajoo, VV Rao and GS Gupta with us in person, and Profs V Raghunathan, SS Rao, JS Chokkhar, K Ramachandran, and N Venkiteshwaran online. We had a magical 90 minutes with them, reminiscing about times in class (from the terror of making CP in AK Jain’s class, to GS Gupta using Pizza and Pao Bhaji to explain the impact of expansion and contraction of an economy) and about how through word and deed they taught us much more than just management – a lot about life itself! 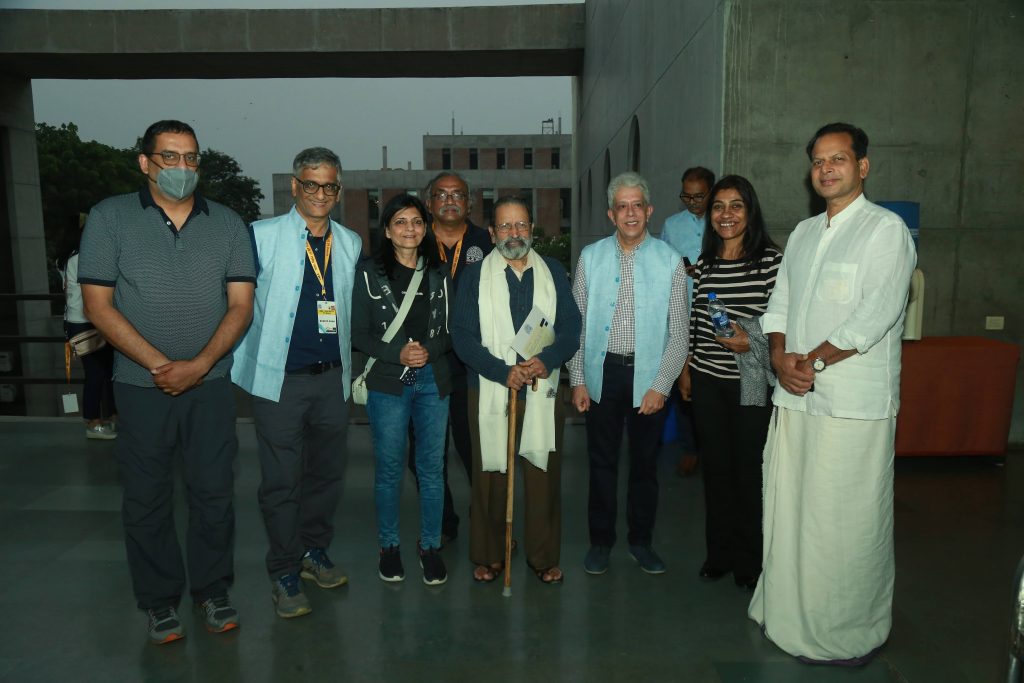 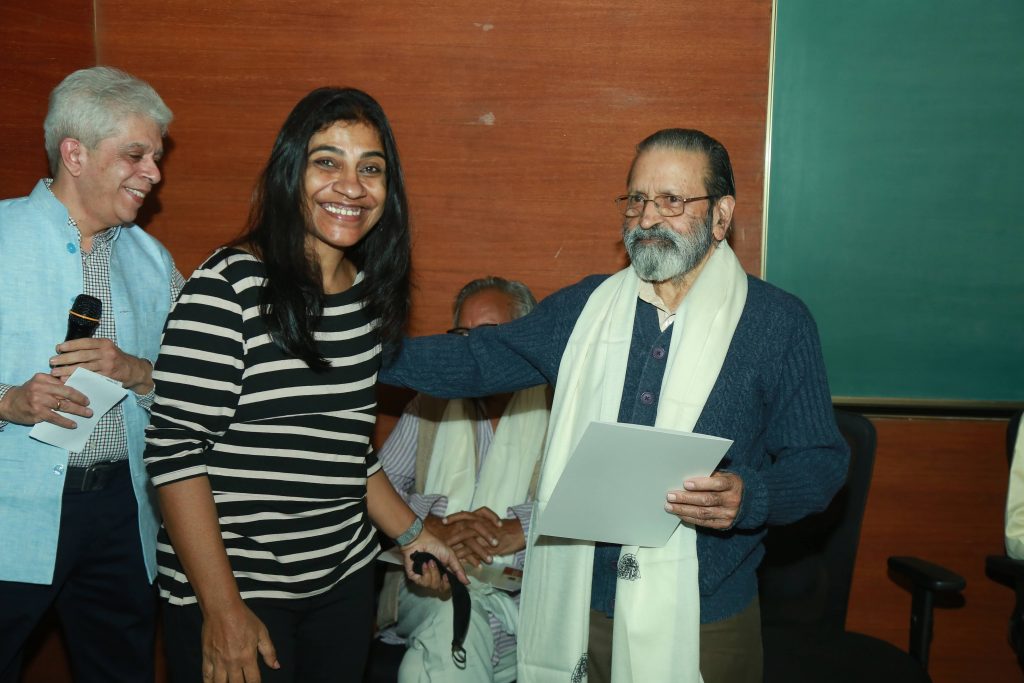 And then of course there were the spiritual discussions. A special shout out here for Saby from the batch of 92, whose spiritual orientation is so high that he could make an alternate career of being a Baba! He insisted that all discussions of any import must be spiritual, and what an impact this had! The level of CP went up, and so did the quality of the discussions. Devlina and a whole lot of others can attest to this! Saby is now an honorary member of our batch – complete with a PGDM certificate signed by Sidey, so high may his spirits soar!

Looking back, this was a very special reunion. Of course, it was wonderful to meet old friends, and to see how we’d all grown as people, but what really made it special was the fact that despite the restrictions of Covid, we could still get together. We successfully pulled off a hybrid online-offline meet, and thanks to that, batchmates from all over the world could join. It took some serious hard work from a number of people to get this going: Dixie, Sampat, Saby, Sethu, Akhouri, RoyC, God, Monika, Lala, Namrata (Lala’s wife), Anish, Preeti (Anish’s wife), Kailash, and of course the indefatigable and ever enthu Anju, Dixie’s wife, who is also now one of us – yes, complete with a PGP certificate signed by Sidey!