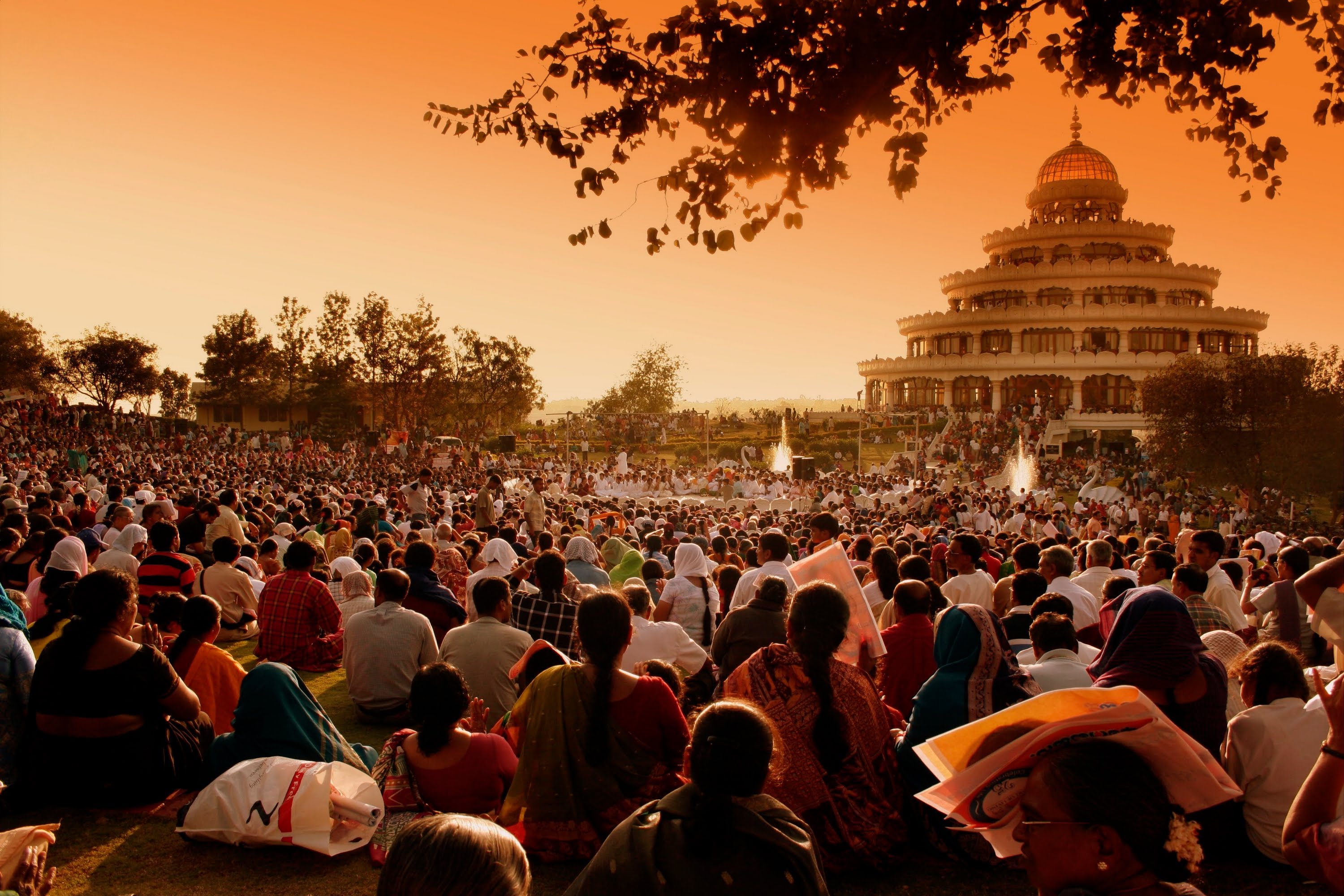 On a lazy Sunday afternoon, wifey dear adopted that tone seasoned ladies reserve for their husbands when they intend to pull the unsuspecting chap out of his comfort zone on the couch in front of the telly, watching cricket and making them do something totally absurd like going down to the hypermarket to check out the end of season sale. “You know”, she started, “we have been living here in South Bangalore all these years and have still not been to the Ashram. Even my friends find this difficult to believe. So why don’t we go for the Sunday Satsang today? Particularly since Guruji is here too.”

‘Guruji’ referred to HHSSRSji, the evangelist, and artist-in-chief of The Art of Living curriculum. Although I believe that we all are inherently born with the art of living and practice it regularly till the commerce and science of living squeeze it out of us and that we should be rather taught the Art of Dying to partly regain this lost skill. But I guess nobody will pay good money for any association with death, particularly if it is your own. And if the monetising of this IP is any indication, there is surely a lot of money to be made in the living/wellness business.

That his ashram was only a few well-launched stones thrown away from our home was a favourable factor to weigh in the Bangalore traffic. So like a seasoned husband who knows the perils of ignoring such signals for too long, I reluctantly pulled myself out of the Sunday post-prandial stupor, and with the family safely seated, pointed the car southwards and let go.

The Ashram is a lush green paradise, with the feel of a popular tourist spot. The devotees comprise a mix of the locals and the rapidly overtaking immigrant ‘Techies’. As the day’s discourse was to be in English, the concentration was more of the latter. The venue of the events was the towering cake shaped Visalakshi Mantapam in cream and pink built overlooking a valley that the sunset in. Inside there was a round marble stage for The Sage and marble steps all around for his devotees to be seated. One felt like one was attending ‘Indrasabha’ with Indra presiding over the ceremonies. Men with black hair and beards in flowing white kurtas and lungis and women with flowing silk sarees and long black hair braided with flowers sang devotional songs of various hues to the accompaniment of modern musical gadgets, while the audience of assorted techies of various genres beat time.

We settled on the steps a little to the right of Guruji and started taking in the drama unfolding before us and watching the crowd enjoying the scenes on offer. Suddenly, a few rows behind us I spotted in the audience ‘The Khanna’ himself! Vinod, not Rajesh, although he was equally look-worthy a few decades earlier. It seems HHMPVKji (His Handsomeness Member of Parliament Vinod Khanna ji, for those who don’t get the drift), of The Art of Loving fame, had sneaked in quietly through a dark French window and was trying his best to merge with the shadows and be a part of the crowd unnoticed.

Actually, it was our son who had spotted him first. But him being almost ignorant of the characters of Bollywood, had drawn upon his nebulous knowledge of the industry built primarily from having seen his mother’s favorite movie Dayavaan in parts and had got thoroughly mixed up with the actors and concluded that the man seated quietly in the shadows that day was Feroz Khan! And since he had learnt of his demise a few months ago, he conveniently presumed it to be his ghost and accepted it as a normal part of the audience at such spiritual gatherings and hence decided to pay it no further attention.

Me of course, despite having all pertinent information on her likes, nudged wifey and grudgingly surrendered this information to her, and then watched helplessly as her world shifted its axis! Suddenly HHSSRSji lost all eyeball power. HHMPVKji does have that effect on ladies even now. Once a very dear friend had introduced his wife to him at Colonel Kapoor’s (of ‘Ketchup hota kaddu bhara’ fame) party in Delhi, as they were both Rajnishites at that time, and The Khanna, learning that she was a huge fan, planted a social peck on the lady’s cheeks, whereupon the lady promptly fainted in his arms and The Khanna had to hand over the pieces to the husband to put together with the embarrassed and guilty demeanor of an unruly child having broken the host’s precious vase. Fortunately for me, the crowd between us was a deterrent. But still the backward glances continued with such regularity that after a while The Khanna decided to move his chair a bit to position a pillar in between, and I refused her requests to budge to continue offering uninterrupted view citing crowd jamming. The Khanna and I surreptitiously exchanged a grateful look thanking each other. Whew!

Meanwhile, on HHSSRSji’s stage the music and the day’s ceremony were reaching their climax. All that remained for The Sage to do was to cut the cake. The custom was that all devotees with birthdays or anniversary would bring in cakes for Guruji, who would pick one for cutting. As a show of his largesse, he would throw a piece into the crowd as Mahaprasad and to the devotees that were a treasure worth cherishing. So that day too The Sage chose an appealing chocolate vanilla strawberry four pounder and amongst chants of happy birthday cut it with his Sudarshan Chakra! Then in true Krishna style of playing with his Gopis, he picked a half pound piece and titillated the audience with where he was going to throw amongst frenzied screams of “Guruji here, Guruji here”. In that mayhem, his eyes met mine for just a second, and in that second I saw something flicker in his eyes and I knew for sure he had chosen the direction of his throw. But the wily old sage continued to put up the show and flirted with the audience on the opposite side. In time, as he shifted to launch mode with his back twisting and his arm arching back, so did I crouch in leap mode with my weight transferred to my soles and my thigh and calf muscles tensed. As his arm swung, I poised. And the moment he let his palm open to make the cake fly, I performed literally the biggest ‘Salto de Fe’ of my life!

It was that, wasn’t it? Because with hindsight, had it not been my day I would have looked pretty silly leaping in the air for a cake flying in the opposite direction. No? But it was my day! Hundreds of disappointed eyes saw a six-foot man leap four foot in the air to aim for the prized trophy. At the zenith of my leap, my fingers smashed close over a gooey mass of sweetened flour, chocolate, vanilla, strawberry et al and instantly reduced it to pulp. Shrapnel flew all over the hall and devotees went scurrying for the debris. Still, my hand captured a sizeable portion of it.

A man had leapt. Superman had landed!

From being a meek mortal in the shadows of the likes of The Khanna, I had acquired Divinity. There were sighs of awe everywhere. Women looked impressed. Mothers were pointing me out to their kids as their future role model. Men were just plain envious and avoided eye contact. I have never seen a queue of ladies form so quickly, each wanting a lick of my fingers, one segment a luscious mouth! And all this with the full approval of my wife, misty-eyed, one hand to her cheek, full of admiration, head shaking slowly in disbelief.

HHSSRSji and his coterie had abdicated the Indrasabha to me and my Apsaras. The Khanna too, I noticed, had made a quiet exit. And strangely, I found Daag Dehlavi’s lines float through my head: