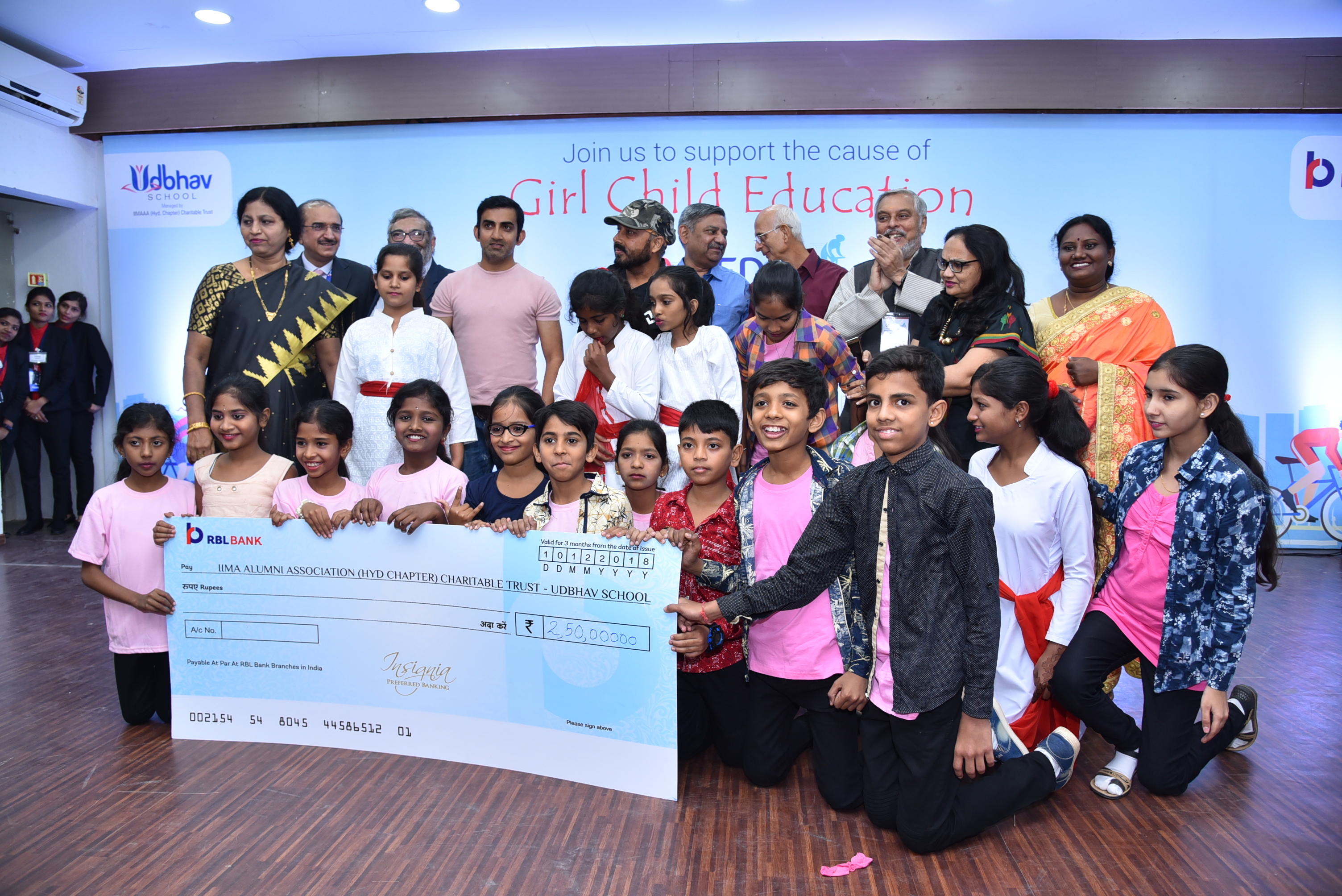 The fifth edition of the UMEED 1,000 km long Cyclothon was flagged off from Mumbai on 30th November, 2018 and reached Bangalore on 10th December, 2018 to raise funds for “Udbhav School” which is run by Indian Institute of Management Ahmedabad Alumni Association Hyderabad Chapter Charitable Trust. 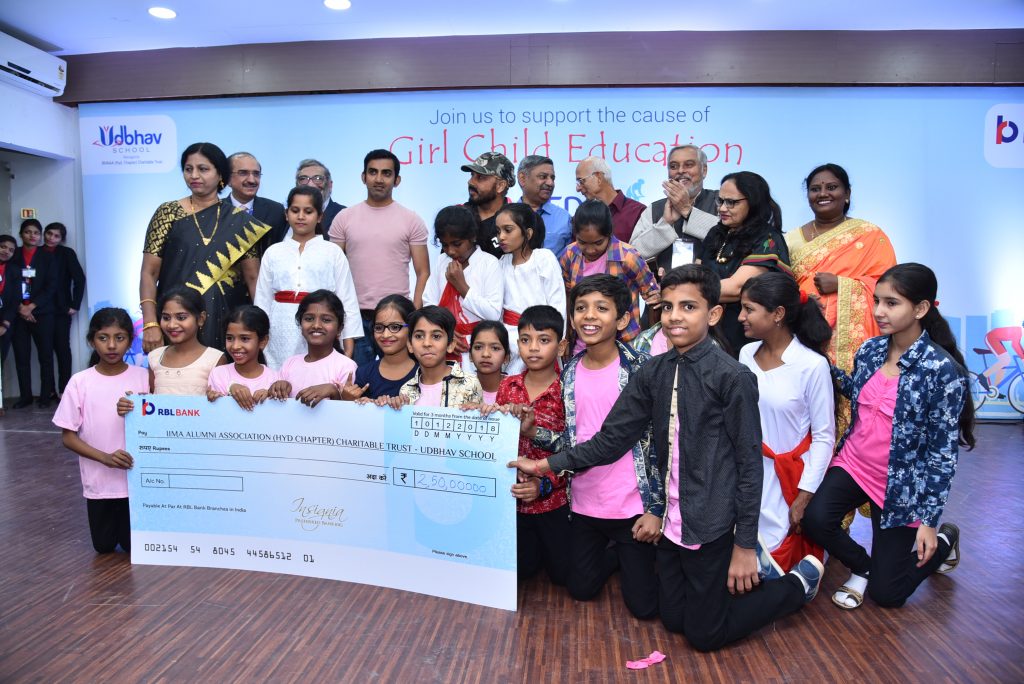 GAUTAM GAMBHIR SUPPORTS UMEED 1000 Former Cricketer Gautam Gambhir for the second consecutive year has shown his support towards this noble cause by not only agreeing to be the Chief guest at the closing ceremony at Bangalore but also promoting the same on Twitter and his social media handles. His presence doubled the joy and enthusiasm of the cyclists.

FOR THE FIRST TIME AN IIMA ALUMNI MR. SUNDAR (FILM MAKER) CYCLED FOR THIS INITIATIVE Mr. Shanmuga Sundar Lakshmanan (PGPX 2009) from Chennai Chapter joined the cyclists team taking out time from his busy schedule. Touched by this noble cause, he also decided to make a documentary on this initiative. He has never cycled for more than 100 km at a stretch, but he decided to cycle all 1000 km to support this cause.

“UMEED 1000” is a CSR initiative of RBL Bank, a Cyclothon with a cause – girl child education. The concept is simple. A group of corporate employees will cycle 1000 km over 10 days to create awareness for girl child education. Initiated in 2014, UMEED has successfully completed four years and entering its fifth year. Mr. Jasmeet Singh Gandhi, a cycling enthusiast, who spearheaded this initiative, is the lead cyclist. The funds collected will be donated to an NGO run by IIMA Alumni.

Thirty-five RBL Bank corporate employees under the leadership of lead cyclist Jasmeet Gandhi have taken 10 days’ time off from their work and cycled 1000 kilometers to raise awareness about girl child education under a program called “Umeed 1000 2018”. On the other hand, about ten IIMA Hyderabad Chapter alumni have taken time off from work to plan and support this entire event. The RBL senior management have taken time off from their busy schedule to support, monitor, fund and lead the fund raising effort. A closer look unravels the fact that every involved individual believed in the good cause and the purpose was close to everyone’s heart. Girl child empowerment and education was close to many involved professionals because it is common in India among poor and single parent families to invest in boy’s education and avoid girl child education purely because these families are unable to afford education to many children.

At the end of the event, a total INR 2.5 crores was raised and the money raised will be diverted towards corpus for taking up another underprivileged school and name it as RBL Udbhav School. 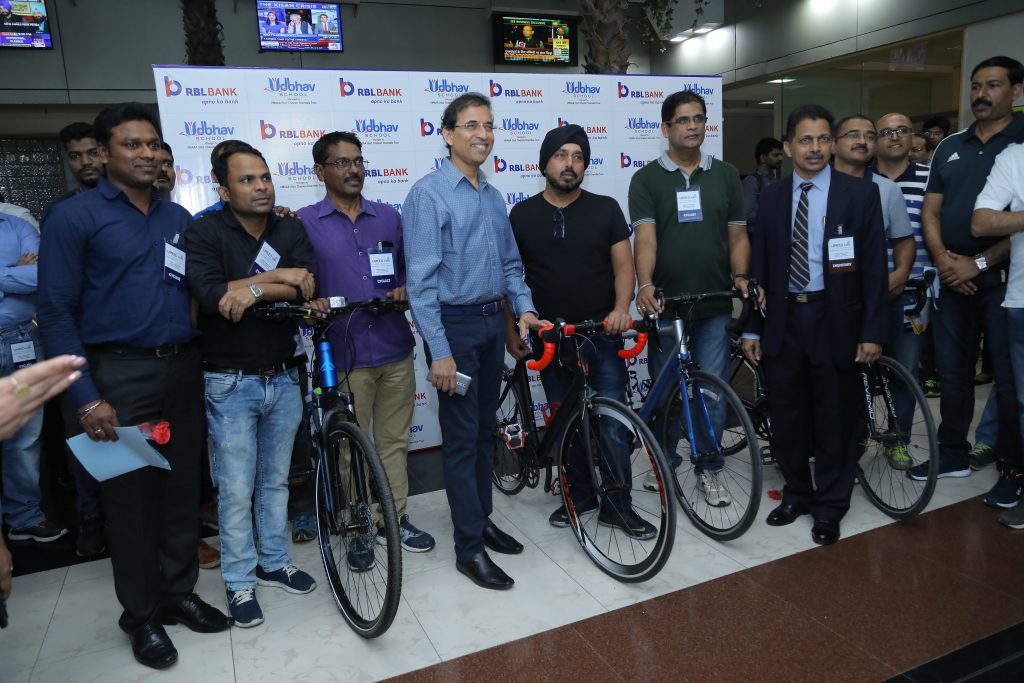 OPENING CEREMONY AND FLAG OFF This year’s event was kicked off by an opening ceremony on 29th December 2018 at Welingkar Institue, Mumbai. The Dean of the college Dr. Uday Salunkhe was so drawn by the social cause that he decided to borne all expenses for the event. The opening ceremony was the first instance where all the cyclists interacted with one another in person. It was fascinating to see the energy and passion demonstrated by them during the photo shoot. They were oozing from every pore about girl child education and the difference they were going to make to Udbhav School’s girl child kids. The opening ceremony was also a perfect platform for the media to interact with the cyclists. It was fascinating to see a large media contingent were present for the interaction with the cyclists. Udbhav School kids also leveraged the opportunity to interact with the cyclists and thanked them by felicitating with self-made greeting cards. All the cyclists led by Mr. Gandhi started their cyclothon journey at about 6 am on 30th December, after a grand flag-off ceremony at IIM Indore Campus at Belapore.

THE MEET AND GREET PROGRAMS ENROUTE The journey started with an enthusiastic beginning when the staff and students of IIM Indore – Belapore campus flagged off the cyclists at 6 am. Their first stop was a visit to the Mapro strawberry farm which reminded them of their childhood of enjoying fresh strawberry ice cream. Followed by a spiritual visit to Hirasur Temple, they were hosted with hot lunch. The cyclists were unaware that a surprise waits for them at a lunch point in Karad, where Abhinandan Patil’s (RBL cyclist) parents organized a traditional welcome and got kolhapuri turbans for the entire team. The cyclists were taken back by another big surprise when they saw Mr. Gautam Gambhir welcome them at RBL Kolhapur branch which had organized a grand event as their branch completes 75 years.

The team took a break at Belgaum and decided not to rest but to spend their quality time by playing a friendly cricket match with the visually impaired children of the Samarthan Blind School and also gave away Braille watches to the kids. A team of 50 women cyclist decided to join the UMEED team from Belagum Karnataka Special Reserve Police which included 4 IPS officers which was led by Additional Director General of Police Mr. Bhaskar Rao. The team could not miss to meet the most popular “MONKEY MAN” from the Chitradurg Fort, where Mr. Jasmeet Gandhi Lead cyclist could not stop himself from donating his cycle to the monkey man (Mr. Jyoti Raj) when he expressed his love towards cycling. All the meet and greet locations witnessed a large gathering of local inhabitants and media personnel. Jasmeet, the lead cyclists, spoke about the event and the importance of girl child education. 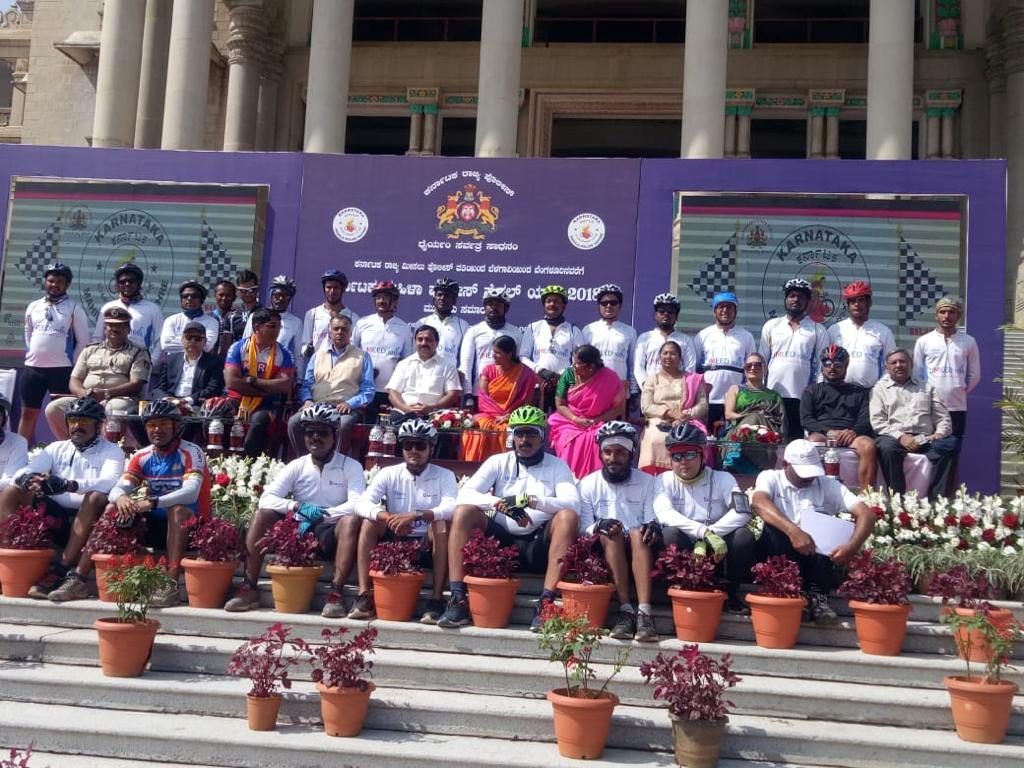 The Energy at the Closing 15 Udbhav School Kids, who traveled from Hyderabad have warmly welcomed both the cyclists with welcome message placards and flowers. The cyclists reached out to every student with handshakes and the sense of gratification and smiles in their eyes, conveyed the joy of having contributed towards the lives of girl children. Udbhav School kids staged a skit and danced on a song, which was thoroughly enjoyed by all the audience. The event concluded with Gautam Gambhir, Jasmeet Gandhi and Shantha Vallury handing over the 2.5 crore cheque to Udbhav School and IIMA Hyderabad Chapter representative Mr. Harish Kumar.

Fundraising For raising funds, the online crowd funding platforms like Letzchange and goodera.com were leveraged. As the team had a successful experience with online portal goodera.com from last year’s edition, the platform was invited again to come on aboard again. While the cyclist’s team started covering the kilometers, the online portal’s funds contribution counters also started ticking in. With the message reaching various parts of the country, emails of cheer and supports started pouring in.

Going forward “This event has established that whenever there is a great cause and a creative event, IIMA alumni and corporate employees are more than willing to participate in full measure. This is my happy discovery,” said T Muralidharan, VP of IIMAAA Hyderabad and the chief fundraiser for Udbhav School. IIMAAA Hyderabad hopes to partner with the UMEED Cyclothon team to repeat this exercise in 2019 December.