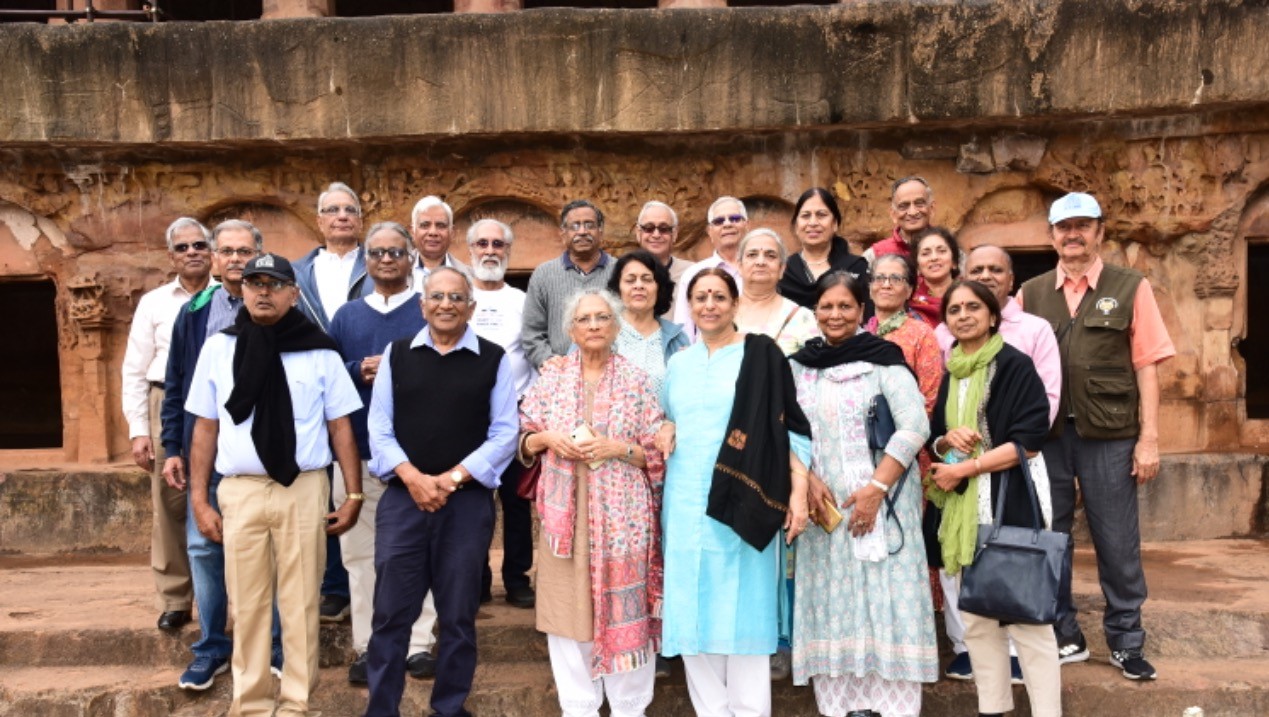 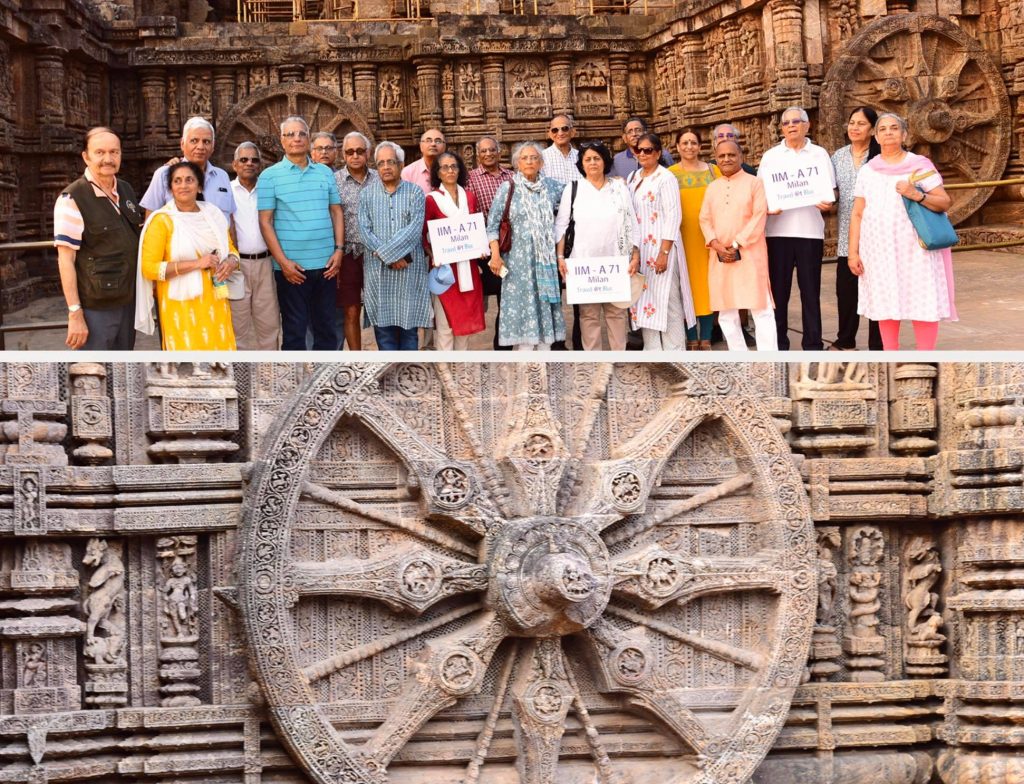 24 alumni from PGP 1971 batch, along with their spouses, got together for the 19th time about one year later after the Goa Milan. This time, our batchmate Mohammed Yusha, MD of Serajuddin Mines, took the lead in organizing the Milan in Bhubaneshwar, Odisha which was externally coordinated by me. He also organized our stay at Mayfair Resorts and our travel arrangements were done by Travel at Blue.

We landed in Bhubaneshwar airport from 6 different cities and it was the first time for many of us visiting Bhubaneshwar, Odisha. The Travel Agent from Travel at Blue welcomed us at the airport and we were transported to Mayfair Resorts. We were welcomed at the hotel by the General Manager along with other staff with flowers and were allotted the rooms. 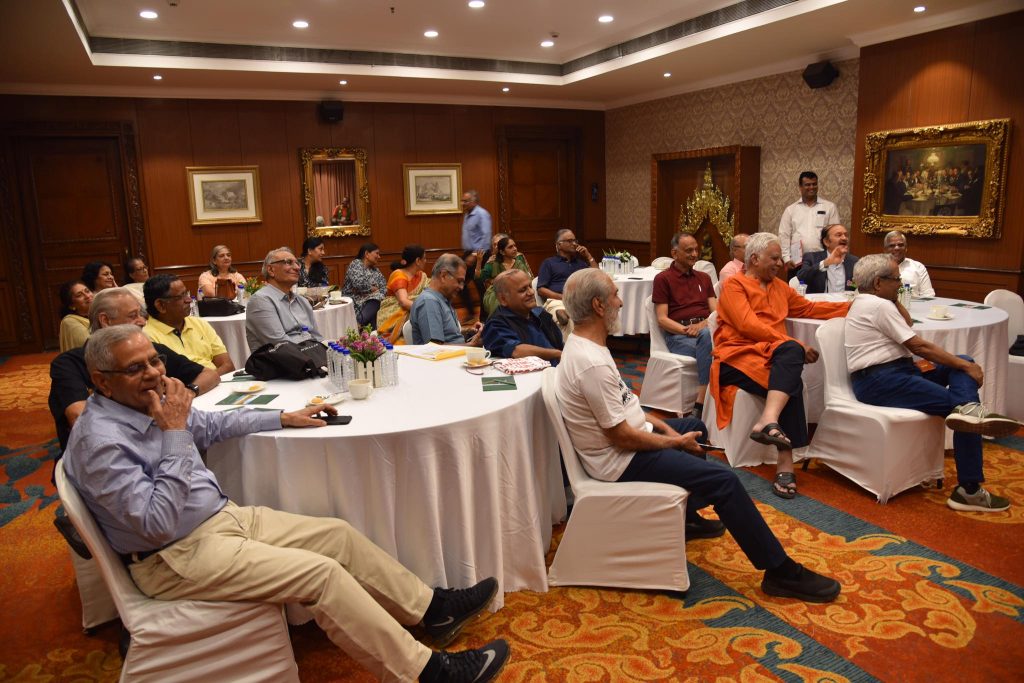 Though we knew about the resort through Google, we were stunned at the beauty of the path leading to our rooms. It had antiques and wooden figures of various kinds every 20 feet! The rooms were superb. There was a small sit out which was facing an artificial lagoon, with water birds, turtles, plants with flowers, and butterflies fluttering around – the most relaxing atmosphere for us all 70 plus! After lunch, we surveyed the amazing hotel layout and relaxed.

An idol of Lord Jagannath in the corridor of the resort

In the evening after tea, the travel guide gave us the programme for the next day. After that Mr and Mrs Chandrasekhar enacted a familiar and humorous skit, showing the travails of old age. This was followed by Mr Ranjeet Dugar reading out an emotional poem of our association 49 years ago which gave him a standing ovation.

Day 2 After breakfast, we piled into the Odisha Tourism Development Corporation’s Volvo to begin our tour with a running commentary from the guide.

First stop was at the white-coloured Shanti Stupa (Peace Pagoda) at Dhaulagiri – a serene place in the outskirt of Bhubaneswar, said to be the battleground for the Kalinga War in 260 BC where the great Mauryan emperor ‘Ashoka the Great’ won the battle, but upon seeing the bloodbath had a change of heart and became a propagator of peace by spreading Buddhism. There were the rock edicts of Emperor Ashoka about the battles and rules. There was a slight drizzle and so we could not enter the giant white Shanti Stupa that was built through Indo-Japanese Collaboration.  However, after some photographs, we left for lunch to Vithal Kamats Original Family Restaurant on the beach.

We then visited the famous Lord Jagannath Temple with an exclusive Panda (Pujaris and Guide). Since vehicles are not allowed up to the temple, we went by cycle rickshaws and autos till the gate. Further, inside the temple – we had to wait for about 1 hour to have darshan of Lord Jagannath, Subhadra and Lord Balabhadra. We did not see any shadows in the temple. The flag atop the main temple was flying against the wind. The idols are made of a special type of Neem wood, known as daru brahma. These idols are changed every 8, 12 or 19 years, around March/April. This wood is found when the head priest gets a dream about the location of the appropriate tree. Artisans known as Viswakarma, carve the idols behind closed doors. The newly carved idols are then taken in a procession to the temple into the sanctum and the old idols are buried as per tradition.

Next, we went to the grand Sun Temple at Konark – one of the greatest architectural masterpieces of India and the last standing structures before the fifteenth century in the country. It is a UNESCO World Heritage Site. This huge stone structure building with Kalinga Architecture has intricate carvings that depict social scenario, royal life, common people, tantra mantra and other details from those ages. Built by King Narasimhadeva I of the Ganga Dynasty in the 13th-century, the entire temple was designed in the shape of a colossal chariot, carrying the Sun God, Surya, across the heavens. Surya has been a popular deity in India since the Vedic period. 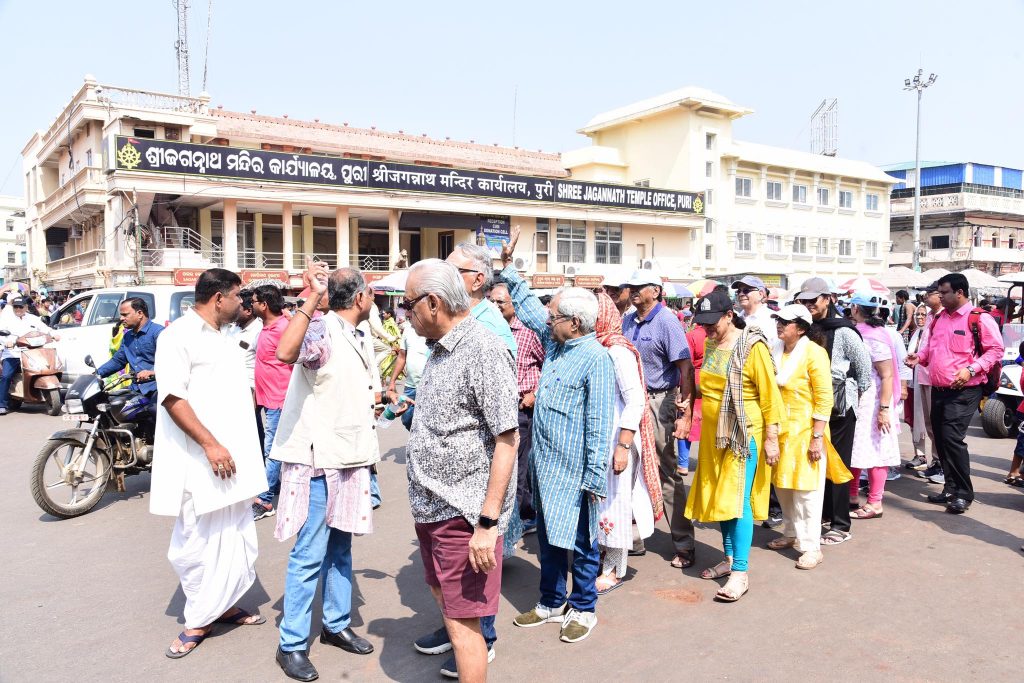 Day 3 After a leisurely breakfast, we reached Balugaon and were escorted for a unique boating experience on the Chilika Lake. It is the largest coastal lagoon in India and the second largest brackish water lagoon in the world after the New Caledonian Barrier Reef. Dotted with many emerald green islands having colourful names such as Honeymoon Island and Breakfast Island, Chilika is home to a rich variety of aquatic fauna, and the largest wintering ground for migratory birds. We visited a temple on the island and then returned for a sumptuous lunch at Panthanivas OTDC Hotel.

Day 4 In the morning there was heavy rain, but we managed to see a beautiful Lord Shiva temple in the pouring rain. The architecture was typical Odisha style. (see picture) Then we went for a short drive to another end of the city to peep into the glorious past of Udaygiri and Khandagiri Caves – considered as a historical wonder of India, dating back to 2nd Century BC.

We then went to the elegant and well laid out Odisha Crafts Museum. We also had a tasty lunch at the museum canteen.

Post lunch tour included an interlude journey into two magnificent museums of the country, one known as Museum of Tribal Arts and Artefacts while the other known as Odisha Crafts Museum or Kalabhoomi, both provide an interactive learning experience – giving everyone a unique insight into the lives of tribal communities and the rich manifestations of arts & crafts.

We then visited our batchmate Mohammed Yusha’s fabulous farmhouse for dinner, where we met his 2 sons and daughters-in-law. It had a swimming pool to make it a perfect poolside dinner. It rained, so after the dinner, we left ending the memorable 4 days. 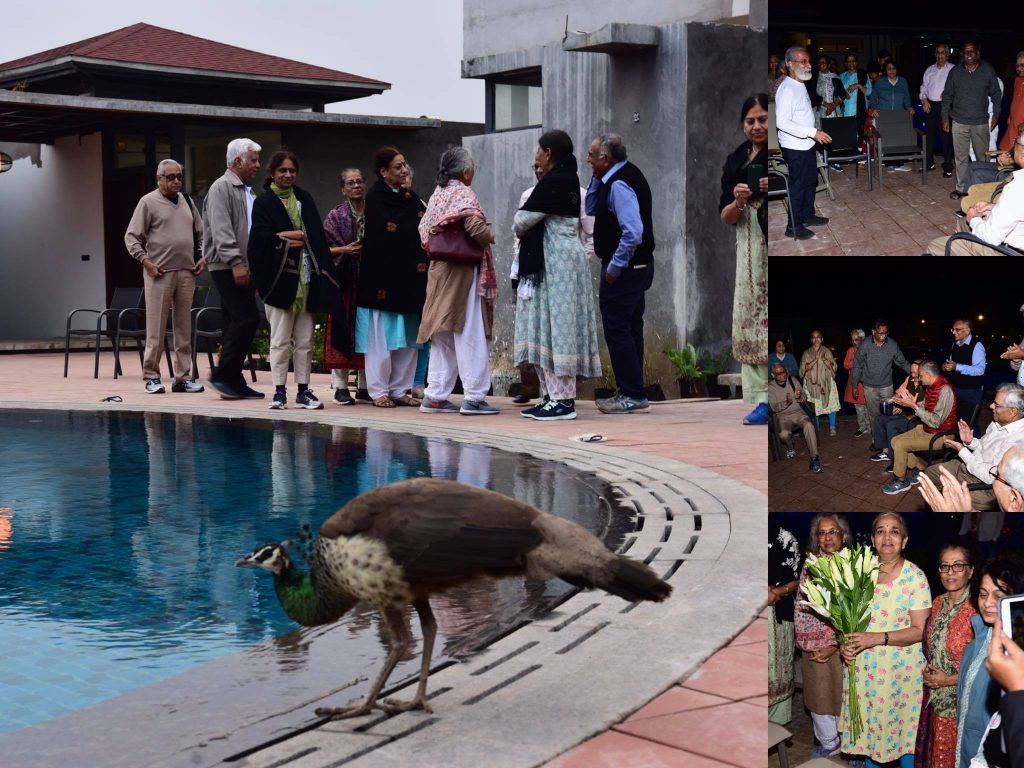 Day 5 After breakfast, we were dropped at the airport to go back to our routine retired lives.

A big thanks to Mohammed Yusha who made the trip possible.