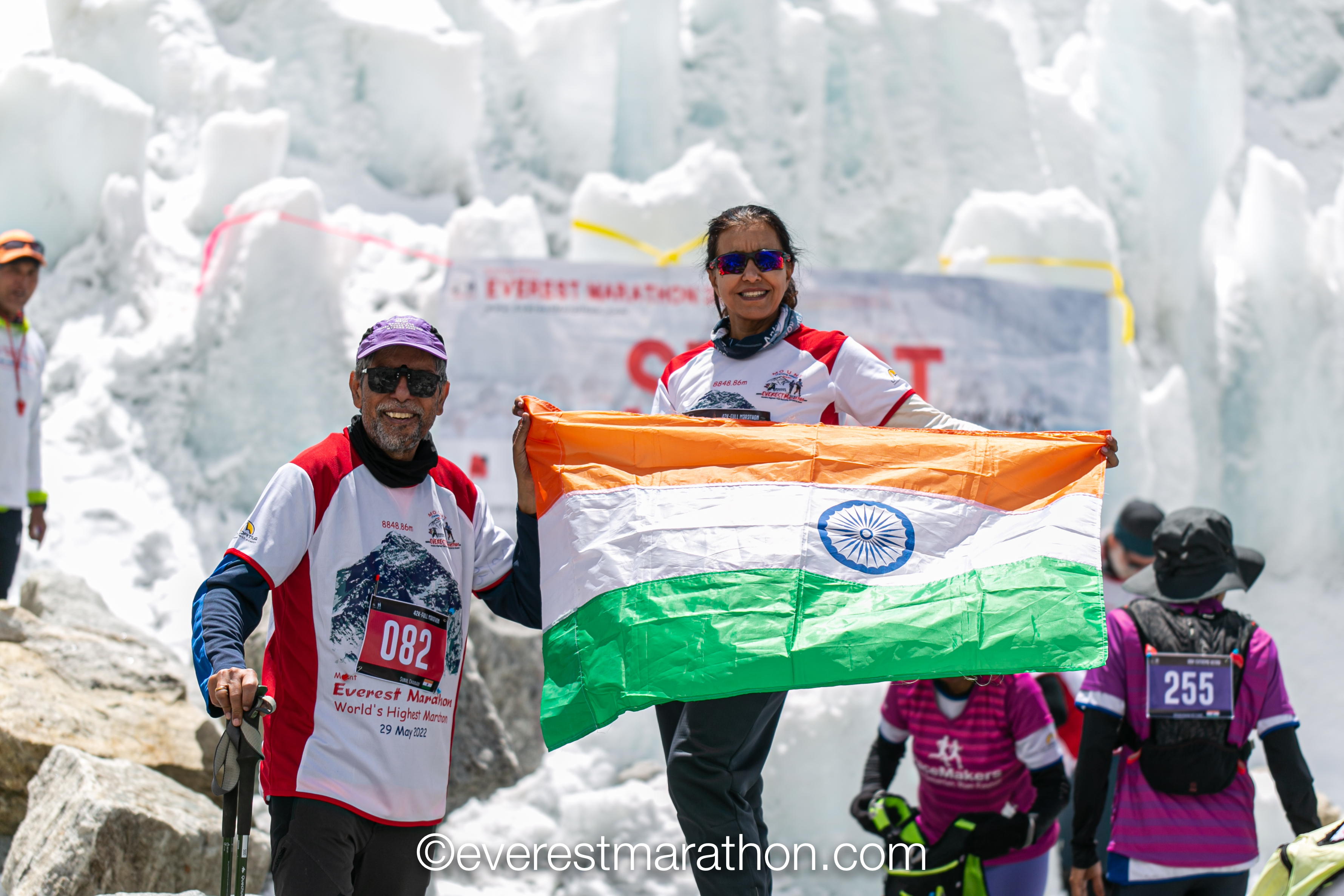 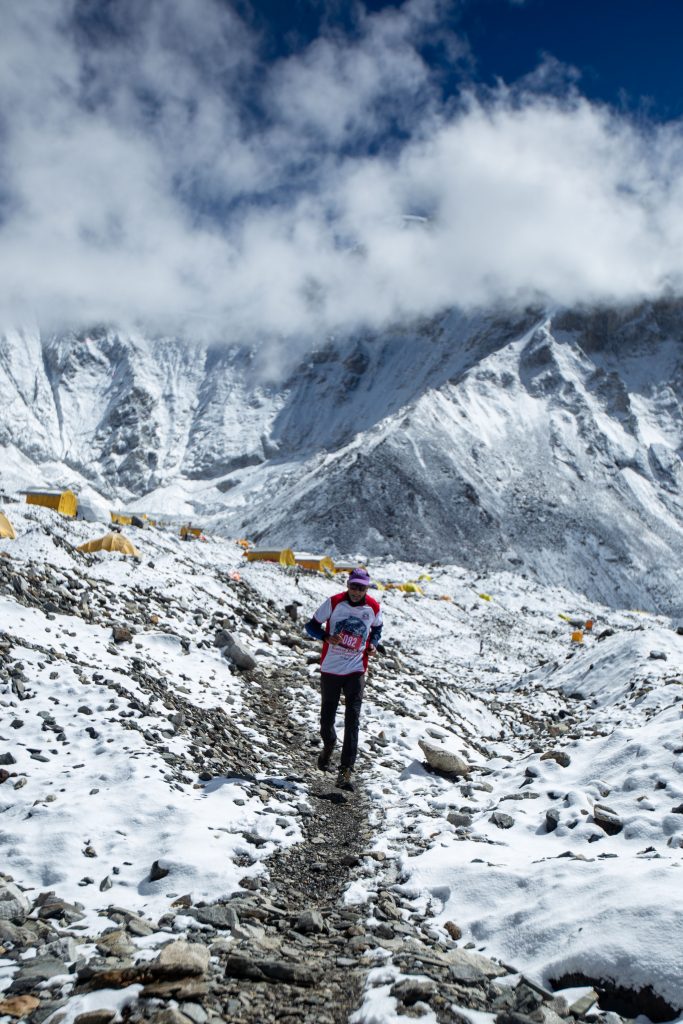 Tough terrain at start of race

I’d rather look back at my life and say ‘I can’t believe I did that’ instead of saying ‘I wish I did that’.

On 29th May, 1953, Tenzing Norgay and Edmund Hillary became the first to summit Mount Everest. To commemorate the 50th anniversary of this event, the Everest Marathon was launched in 2003, and barring calamities like earthquakes and the pandemic, this marathon has been held on 29th May.

A Delhi based runner had run this in 2010 , and my good friend Rahul Verghese (PGP 1982) ran this in 2014. I wanted to run this race for many years, but was unsure about my ability to handle heights and the wild outdoors.

Distance running has been my passion for many years, but most local and international races got cancelled in 2020 and 2021. Friends suggested I consider a trek, and so I registered for the Great Lakes Trek (my first trek) in Kashmir in July 2021. After this magical experience, I signed up for the Gokyori trek in Nepal in October 2021, which takes one to a similar elevation as Everest Base Camp (EBC).

The Gokyori trek gave me the confidence to sign up for the 2022 Everest marathon. A big challenge of this marathon is reaching the starting line – runners have to trek up from Lukla (2840 metres) to EBC (5364 metres). The marathon is from EBC to Namche Bazaar (3440 metres) and is rated as one of the world’s toughest trail marathons on account of elevation, weather conditions and rugged and uneven trail – it attracts runners from across the globe.

After assembling in Kathmandu on 15th May, we flew to Lukla on 17th and started our trek – our aim was to reach EBC by 27th May. Fortunately, our flight took off on schedule. Kathmandu – Lukla flights are often cancelled due to bad weather. Delayed flights give less acclimatisation time on the trek. 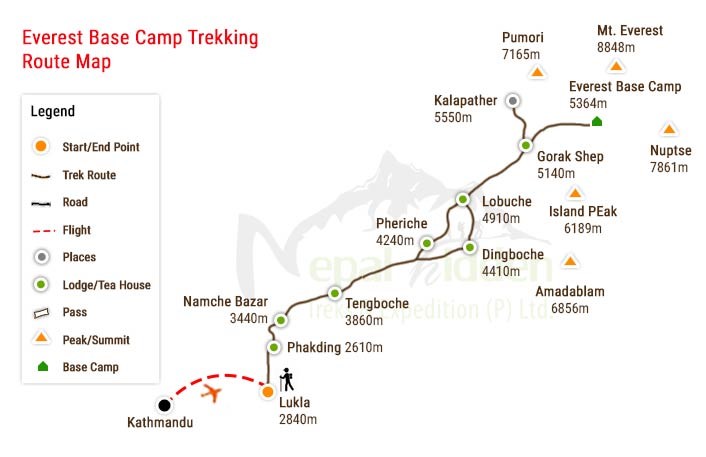 Trekkers and climbers know the importance of ascending slowly to enable the body to acclimatise and reduce risk of Acute Mountain Sickness (AMS). Our organisers ensured that we ascended gradually with extra stops when we gained significant height. The challenges on the trek were weather, altitude and terrain – the path was rugged, often with loose stones and boulders which were tricky to cross specially when wet.

We encountered several extremely cold and wet days with snow and sub zero temperatures. On most days we trekked for 4-5 hours, though a few days were much longer. Overnight halts were in teahouses of varying quality, but we got hot meals and warm water to drink/wash as the cold water was freezing.

The last stop before we reached Everest Base Camp (EBC) was in Gorakshep, where we were greeted by a snow storm. However, the weather cleared the following morning and we managed to trek up to Kala Patthar (5550 metres) where we got amazing views of Mount Everest.

We left Gorakshep on 27th May to head to EBC – a short but difficult stretch. Normal treks to EBC go up to a famous rock and then return – but the marathon runners got to spend 2 nights in tents. While we were exhilerated to be staying at EBC, we were soon shivering as there was a massive snow storm at night and had to keep waking up at night to knock off the snow from the top of our tents. Most of us got very little sleep that night.

28th morning was sunny and clear, and we found that the previous night’s storm had covered our tents with over 2 feet of snow!! This got us confused about what we should wear for the run – the weather being so fickle. In fact, the sharp sun made our tents feel like a sauna in the afternoon. The sun melted some of the snow, but walking conditions were treacherous. We got very little sleep that night.

Race day – 29 May, 2022 We woke up by 4.30 am and had breakfast at 5 am. It was a cold morning, so I wore 4 layers on top and 2 at the bottom and carried my trekking poles – fortunately, my extra gear could fit into my 15 litre running backpack, which also contained water, nutrition packs and other essentials like a lamp, toilet rolls, medicines and sanitiser. We assembled at the start point by 6:30 am for the 7 am race to start.

The marathon route retraces most of the trek route up to Namche Bazaar, and there were check points/aid stations (marked on map below) every 4-5 km.

While it was cold at the start, fortunately, it was dry and not breezy. I had done mental maths and was hoping to finish the race in approximately 10 hours (my normal marathon time is about 4 hours 15 minutes).

The first 5 km to Gorakshep were the toughest – altitude, weather, terrain, plus a single file track. Unfortunately for me, during this stretch, my stomach packed up – this is a form of AMS and affects many trekkers at altitude. So, there I was on a single file trail in freezing conditions and unable to find a safe spot to ease myself – eventually I found some rocks after Gorakshep and made the first of many unplanned stops.

The stomach bug slowed me down and prevented me from consuming food or energy gels/bars through the day – this resulted in my feeling extremely weak. However, either I had to keep going or consider an expensive helicopter evacuation!! So, I plodded on at a very slow pace and kept looking for the next aid station.  I crossed Gorakshep in about 1 hour 15 minutes and Thukla in 3 hours 15 minutes, and reached the first stop in Dingboche (17.3 km) in just under 5 hours. The next 4 km took about an hour and I reached the halfway point in about 6 hours.

The next challenge was to reach Tengboche within the 9-hour limit (else you need to spend the night there and finish the following day) – so I had about 3 hours to do over 11 km from Dingboche – this was very tough as I was tiring fast and uphills were very difficult. I was given some medication but this did not help much. I was determined to go on and reached the base of the climb before Tengboche in just over 8 hours – the 1 km climb here was a killer and slowed me even more – but I reached the cut off in about 8 hours 30 minutes. While this was a morale booster, I still had a tough part of the race ahead – from Tengboche there is a steep and difficult 3.5 km descent to Laubisasa followed by a tough 1.5 km climb to Kyanjuma – I was really sapped by now, and could barely walk 10 steps before taking a breather – but kept going and struggled up to Kyanjuma. The 5 km from Tengboche took almost 2 hours.

From Kyanjuma the trail is much easier and one knows that the hardest part has been done. So, I pushed on and kept counting down the kilometres to go. After what seemed an eternity, I eventually saw the finishing line and gleefully pulled out the Indian flag as I crossed the tape in 11 hours 30 minutes – a tough race made tougher by my condition. It was almost 13 hours from reaching the start line in EBC to my hotel room in Namche Bazaar, and I survived on a litre of water and no food. Fortunately, I was fine by the next morning, and we had a big celebration in Namche Bazaar.

It was the slowest and toughest marathon I have run, but I do have a medal to treasure!! Mind had scored over Matter!! 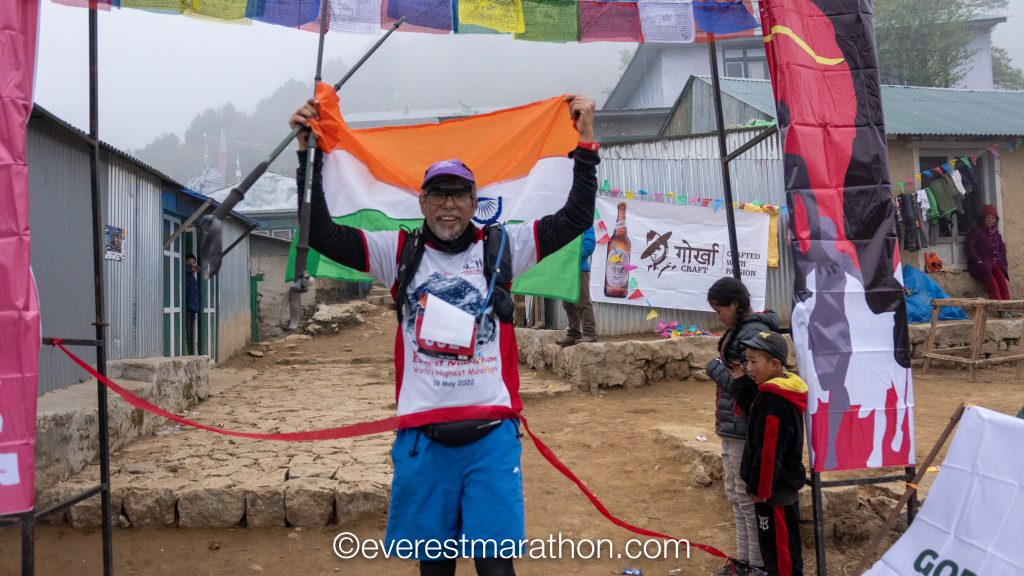